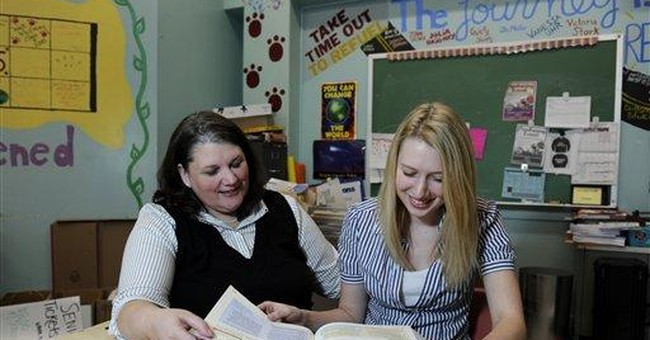 Texas is big. Everybody knows that. Texans, who boast about their diversity and productivity, are usually big, too. Texas produces more beef and cotton than any other state. Texas has a lot of snakes and flowers, and producers of nearly everything everywhere are determined to make a market in Texas.

When the product bears on what children in the other 49 states learn at school, what Texas produces becomes our business. Textbook publishers long ago learned that publishing textbooks for Texas was an opportunity to hit a gusher, like Jett Rink's gusher of oil in the movie "Giant." With more than 4.7 million students and a school board that adopts textbooks for the whole state, Texas attracts publishers from all over to make pilgrimages to Texas to get drafts of their books approved according to Texas standards. It follows that this one-size-fits-all cuts the cost of textbooks for schools in the rest of the nation.

This year, the Texas Board of Education landed itself in the middle of the culture wars when it rewrote the social studies curriculum, inviting a debate that mirrors the values conflict between traditionalists and multiculturalists. With partisans on the right and on the left, it's the 21st century's "battle of the books." The argument is tilted a bit to the right, with 10 Republicans and five Democrats deciding on changes in the books.

"We are adding balance," Dr. Don McLeroy, the conservative leader on the board, told The New York Times. "History has already been skewed. Academia is skewed too far to the left. "

Counters Mary Beth Berlanga, a longtime Texas board member and Hispanic activist, "They are rewriting history." She complains that conservatives ignore Hispanics and want to portray a white America. She and her liberal friends accuse the board of "racist ideology" and spreading "capitalism propaganda."

Calmer observers suggest the changes are a necessary correction of liberal bias. Gilbert T. Sewall, director of the New York-based American Textbook Council, an independent research organization that reviews history and social studies textbooks used in the nation's schools, argues that "for two decades, multiculturalists have tried to supplant the older view of Americans as religious dissenters, pioneers and immigrants intent on making a freer and better life, a force for good in the world, a nation that regulated reform and advanced civil rights to all."

He describes American parents as shocked and dismayed to discover their children are reading history as "a setting for power struggles between groups, or as an unjust and patriarchal society whose rapacity -- from Jamestown to Vietnam -- needs exposure and explication." Columbus isn't a discoverer and explorer, he's an invader and exploiter. Harriet Tubman is a saint. Thomas Jefferson is a sinner.

Although the more than 100 changes recently adopted by the selection board tilt rightward, they are mostly only mildly corrective. The American experience of moving westward is to be described as "expansionism," not "imperialism." The "free enterprise system" replaces the negative connotations that have come to adhere to the word "capitalism" (as in "capitalist pig"). The goals of the Great Society will be broadened to include discussions of its "unintended consequences."

Students will actually learn about "the conservative resurgence in the 1980s and 1990s," including the way Phyllis Schlafly led the successful fight against the Equal Rights Amendment and Newt Gingrich succeeded with the Contract With America and the Republican takeover of the House of Representatives in 1994.

These textbook controversies may soon become moot, as more schools rely on electronic books. Students would do a lot better to read different works of actual historians than the rehashed, reinterpreted history often written by hacks. Herodotus and Thucydides such hacks are not.

History, as the cliche goes, is always written by the victors, but a strange thing has happened to American education since the 1960s. Our triumphs have been trivialized and twisted, demonizing America with no celebration of what America stands for in the hearts and minds of the millions across the world.

Instead of emphasizing the abolition of slavery, the educationists encourage our children to wallow in the horrors of that "moral, social and political evil" before Abraham Lincoln's Emancipation Proclamation freed slaves, along with an enormous expenditure of blood in the Civil War. Instead of focusing on the courage of our ancestors, educationists obsess on what went wrong. They indulge the mindset that sneers at the tea parties as "rabble and racist," ignoring the growing aspiration to return to the smaller government as envisioned by the Founding Fathers.

Lord Byron scoffed that history was the "devil's Scripture." Arnold Toynbee defined history as "a vision of God's creation on the move." The textbook wars will continue, because they're too big even for Texas.