The Roguish Success of Sarah Palin 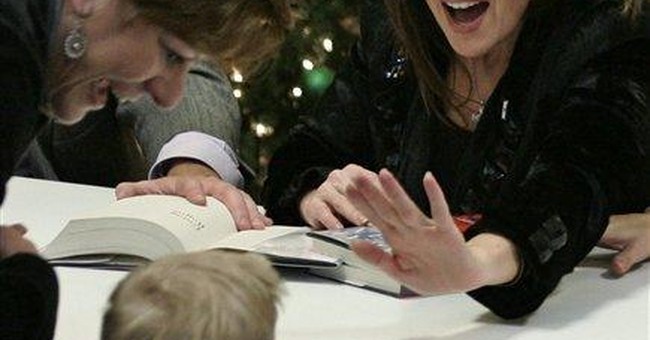 The good news for George W. Bush is that the haters have just about worn out the object of their contempt. The Bush years have been remaindered to the old-news bin. The good news for Sarah Palin is that she's the designated heir.

Good news not only because Palin is laughing all the way to the bank, if not necessarily all the way to Campaign '12, but her popularity with average Americans is growing. She may be the only author in America who can get book buyers to line up by the thousands, sometimes in a cold rain, for a few seconds face to face while she autographs "Going Rogue."

Her book has sold 2 million copies, and even if a lot of those books are heavily discounted from the list price of $28.99, that's still enough to buy a lot of mooseburgers. "Going Rogue" has outsold the much-ballyhooed biography of Teddy Kennedy (even though his death gave sales a nice kick start) and even Mitch Albom, the storyteller who usually outsells everybody.

Her appearance on "Oprah" gave many of the diva's regular viewers, unaccustomed to anything not resembling tapioca, a severe case of heartburn. Not Oprah. The ratings for the show were among the highest ever. Nobody, including the former governor, pretends "Going Rogue" is literature for the ages, but it's no worse -- and a lot better -- than many a politician's memoirs.

To fair-minded critics and political analysts, Sarah Palin is remarkable. She may be a shooting star in a sky otherwise empty of shooting stars, but my, what a bright light the lady makes.

Some of the sound accompanying the light is the noise of grinding liberal teeth, which alone is reward enough for conservatives. And this week, just as the polling numbers of Barack Obama continued to fall, her approval numbers continued to climb. The president, says Gallup, has fallen to 47 percent approval; 46 percent approve of the lady from Alaska.

With considerably more than a thousand days to go before the next presidential election, such numbers are important only as fodder for conversation, but it's the conversation that Washington loves most. She teased the curiosity of the capital again with the news that she's adding public appearances in Iowa. Only to sell books, of course. Everybody who visits Iowa in the dead of winter is not necessarily on the way to the White House, but it is true that the road to the White House begins in Iowa.

The stridency and intensity of the continuing attacks on Palin strike some -- not necessarily Sarah Palin herself -- as evidence that gender is an obstacle unique to women in politics. She shares this obstacle with Hillary Clinton, writes Leslie Sanchez, a Republican campaign strategist, in her new book on women in politics, "You've Come a Long Way, Maybe."

"While women have come a long way since the dawn of the modern feminist movement, women seeking public office share a daunting task," she writes. Well, maybe. But men share "daunting tasks," too. She cites the usual complaint that the Palin campaign coverage started with harmless commentary about her good looks and devolved quickly "into running commentary on her clothing, intelligence, marital status and career home-building act."

It's true that Palin endured unusual media hostility, but media hostility is a Republican birthright for both male and female. Besides, politics is daunting for everyone in the arena. You could ask Bill Clinton, whose private life and public shame became the stuff of caricature, or George W. Bush, who was mocked for nearly everything he said and a lot he did. Soon you probably can ask Barack Obama how it was that even a messiah couldn't get immunity from raillery and ridicule.

In the Sanchez account, both Hillary Clinton and Palin had to recast themselves to please different constituencies. "Some women identified with Sarah Palin because she seemed like a small-town girl, wife and mother. Others vilified her because she is a pro-life, practicing Christian who supports gun rights. Older women identified with Hillary Clinton but by focusing her campaign so heavily on experience, she failed to forge a connection with younger women."

But what makes Palin particularly attractive to many Americans, male and female, is that she hasn't invoked the convenient feminist excuse. She revels in the obvious good looks that attract the eye of men, and many women -- who after all pay a lot of attention to looks, clothes and "home-building acts" themselves -- delight in her roguish success. She makes it all look like serious fun.