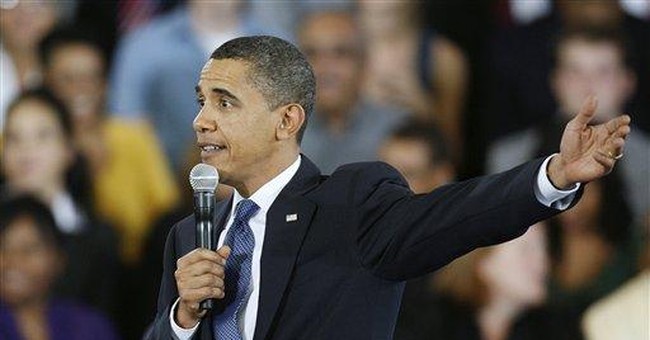 Enough already. Barack Obama got the Nobel Prize for Hope and Hype, and now the rest is up to him. But there are more important Nobels, and this year women won three of these for scientific research. They won not for what they might do, sometime, maybe, could be or hope so, but for what they've already done. Only eight women have won Nobels in physiology or medicine, and the recognition of these women strikes down pernicious myths about women and science. These were not affirmative action awards.

Carol Greider, who shared her prize with another woman and a man, took her two children, a son age 13 and a daughter age 9, with her to her press conference at Johns Hopkins University in Baltimore. Strike another myth, that it's impossible to be a dedicated female scientist and have a family life. Her husband is a science historian.

"I certainly hope it's a sign that things are going to be different in the future," she told The New York Times. "How many men have won the Nobel in the last few years, and they have kids the same age as mine, and their kids aren't in the picture? That's a big difference, right?"

Right. In bold strokes, she put aside the prejudice against women in science. She took a swipe at Larry Summers, who when he was president of Harvard suggested an academic investigation into why there are few successful women in science, particularly the notion that women don't think in the way science demands. But she concedes that women may have "a different social way of interpreting, that would bring results in differently." She urges greater collaborative male-female effort to exploit possibilities, not diminish them.

She explains gender bias and the gender gap in the old boy network with common sense, not outrage. "It's not that they are biased against women or want to hurt them," she says of her male colleagues. "They just don't think (of women). And they feel more comfortable promoting their male colleagues."

Just as there's a cultural bias for men to promote men, there may be a bias for women to want to work for women. There haven't been a lot of women trained to the most rigorous standards in the past.

No doubt many women as well as men disagree with her analysis of the role of sex in science -- it was with no small irony that she was doing the family laundry when she got the call from Stockholm -- but nothing succeeds like success. It wasn't easy getting where she got. She may have been washing the kids' socks and shirts on the day she learned of her Nobel medal, but it was a Christmas Day in the lab when she discovered the biological evidence to validate the theory for which she won the prize.

She found that telomeres at the end of a chromosome could be lengthened by a particular enzyme, a basic science discovery that has clinical relevance for understanding cancers and degenerative diseases. Success is always made of sacrifices and trade-offs.

Carol Greider's prize should encourage kids who suffer dyslexia, as she did as a child. She's proof that symptoms can be discouraging, but they don't have to be disabling. Dyslexia as a child made her feel stupid, but she kept working to compensate and as a consequence developed a good memory for facts. That helped her excel in chemistry and anatomy, where memorization is important. A victim she was not.

Women's choices today are more personal than political. The Barbie doll who complained that "math class is tough" was right enough, but Ken -- who actually looks like he has a lot of undisturbed air between his ears -- could have said that, too. High achievement in math and science as well as history and literature are hard for boys and girls, men and women. Feminism has awakened in women the possibilities to enter a variety of fields that were once closed to them because of educational and cultural bias. These science Nobels for women are a start.

Unlike the Peace Prize, the prizes for literature and science usually recognize a body of work, accomplished over time. Scientists are often imagined to have a "Eureka!" moment, the cry of discovery first credited to Archimedes, the third century mathematician in ancient Greece. He suddenly thought of his solution to a mathematical conundrum when he lay taking the waters in a bathtub. But his "Eureka!" moment followed years of mathematical training. Isaac Newton spent hours of study and thinking before that apple fell on his head, confirming his ideas about gravity.

If the Nobel Prize for Peace sends the wrong message, the prizes in science are of another order altogether. This is our "Eureka!" moment.