Slings and Arrows on the Way 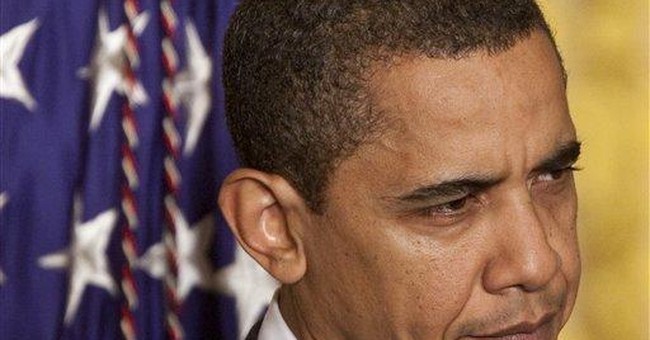 Barack Obama may be becoming presidential at last. The campaign mode of supplication and imitation is fading. The new president has done his Abraham Lincoln shtick, train ride and all. He's no longer tempted to make his Saturday radio address an imitation of a fireside chat (he still sneaks an occasional cigarette, but without FDR's cigarette holder). Conservatives who were afraid to challenge his popularity, retreating to criticism on an unpopular Congress, are unlacing the gloves.

The Democrats are still trying to kick George W. around, but their boots can't any longer reach that far. Angry Republicans are continuing to grumble, but it's only a way to show they're still in the game. (Michael Steele vs. Rush Limbaugh is the halftime entertainment, without the marching bands.)

The new quarterback is calling the signals, and he'll have to face the consequences of the execution of the game plan -- if not now, soon. The tanking stock market is already his responsibility, and soon he'll face the music for how the nation's enemies react to withdrawal from Iraq, for a belated surge in Afghanistan and the rising number of casualties there.

If health care reforms only succeed in making our medicine more like Europe's, thinning the care and surrendering the edge in medical research for new cures and treatments, he'll eventually get the blame for that, too. How will the top medical schools train top people if the profession becomes one of mechanics and technicians presided over by government bureaucrats?

If everything goes right, he'll get the credit for that, too, and Obama is trying to act on the assumption of confidence -- what his grandfather told him he could learn from his father: "Confidence. The secret to a man's success." But confidence can be a trick of a con man, too, and if we become the easy marks, pulled in because we want to believe even when we know better, we'll get only what we deserve.

With political comparisons exhausted -- Lincoln and Roosevelt deserve to rest in occasional peace -- we can look to the examples of literature that measure men, for better or worse.

"Obama is precisely like Hamlet in his conviction that his eloquence proves his leadership ability and his self-knowledge," writes Sam Schulman in The Weekly Standard. "And like Hamlet's, his preparation for high office consisted of playacting, speechmaking and self-examination."

You can read for yourself the self-revealing chapter the president wrote about his community organizing in Chicago. When he realizes that he has failed to achieve results, he goes off to Harvard Law School to fill in the gaps of his knowledge.

"I would learn about the way businesses and banks were put together; how real estate ventures succeeded or failed," he writes. "I would learn power's currency in all its intricacy and detail."

So now he takes tutelage from Larry Summers, the former president of Harvard, and Timothy Geithner, the former president of the Federal Reserve Bank of New York. The president may still think of himself as a learner, albeit armed with "power's currency," but his teachers have become as courtiers to please rather than challenge, as effectual as Rosencrantz and Guildenstern. How else to explain such mammoth excesses in his new budget?

Hamlet, of course, was never "called to govern." The prince was too young, too inexperienced to assume power. Endless vacillation was his undoing. Had he become an authentic leader, the Danes would have wished him well, just as Americans want Barack Obama to do well. "Every American loves this country and wants it to succeed," the president says. But a lot of us think he's really not very interested in bridging the gap of partisanship, despite the pretty speeches.

A small but dramatic example illustrates: Sarah and James Parker attend Sidwell Friends School in Washington with the Obama girls. But unlike Malia and Sasha, whose tuition is paid by their parents, they're part of a tiny District of Columbia voucher program that enables them, along with 1,700 other low-income children, to take $7,500 of public school money to a private school of their choice. The House adopted an amendment to a spending bill last week to eliminate this program, forcing these 1,700 children back to inferior public schools. The Senate could forestall this, by requiring the program be studied for its effectiveness.

Obama says he supports charter schools, not vouchers for private schools. Authentic bipartisanship could defend the voucher program, but the teachers' unions, to whom the president and his party owe their jobs, are determined to protect their monopoly on mediocrity. The temptation to continue campaigning is hard to resist.