Distractions for Obama in Berlin 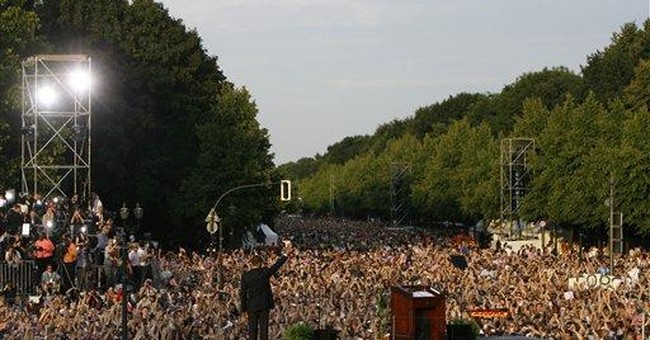 The Germans were ecstatic when Barack Obama landed in Berlin. They called him the "American Idol," a political superstar they expected to walk on the River Spree. He didn't walk on water, but he didn't disappoint. He promised to remake the world where everybody would love everybody.

"There is a sort of 'Obamamania' in Germany right now," says an aide in German Chancellor Angela Merkel's office, "but I think a lot of people will have their illusions shattered if he does become president."

He's a novelty who causes skeptics to suggest he paraphrase JFK's famous boast at the Berlin Wall: "Ich bin ein beginner." He draws admiration as much for not being George W. as for being the first black presumptive nominee for president.

Europeans, like many Americans, are besotted by sentiment, basing their judgment on what they feel, not what they know. He sounds like he's running for president of the world. The candidate strings words together with enormous flair, but his speeches sound better than they read. The words dazzle, but lack precision. The cadences make music, but music marred by occasional false notes. He complains that his audiences lack focus and are easily distracted, but the real trick is in his rhetoric.

When his campaign suggested that he might speak at the Brandenburg Gate, and he switched to the nearby Victory Column, he said he didn't want the setting to be a distraction. But an appearance at the Brandenburg Gate wouldn't distract so much as reflect his chutzpah. He forced Merkel into the schoolmarm mode, to raise an eyebrow at the choice the chancellor called "odd" for a candidate who was not yet wearing a president's breeches.

William Safire, the New York Times word maven, examined the language he calls "Obamese" and observes that the candidate's use of the word "distraction" smacks of being "defensive," as if criticism is a "diversion of attention" rather than an attempt to gain insight into the man and his message.

Obama's rhetoric is refreshing after George W. Bush's tangled syntax and mangled sentences. His word comfort contrasts favorably with John McCain's bluntness in the awkward cadences of an old soldier. But speeches are not spontaneous, they're carefully crafted and can hide a multitude of sins. The poet John Milton, the most educated man of his time, intentionally wrote dull speeches unenlivened with simile and metaphor when delivered by the character of God in "Paradise Lost." He gave Satan the florid eloquence to persuade and beguile, expecting his readers to understand that he was showing how words can deceive.

When Hillary Clinton realized she was losing to Obama, she scoffed at his rhetoric. "There's a big difference between us," she said, "speeches versus solution, talk versus action. ... Words are cheap." But words can be expensive, too, depending on their weight and meaning. Words can be golden or merely gold-plated, and there's the rub.

If you should wear Obama words as a necklace, you should expect your neck to turn green. It's the tarnish now beginning to dull the glitter that's driving the cult crazy. The European cultists may soon be disillusioned with a "wiggle-room" candidate who "nuances" his positions on troop withdrawals from Iraq and changes "no preconditions" to "preparations" for meeting with Iran. The golden-tongued seducer may turn out to be an alchemist playing tricks with base metal.

When William Jennings Bryan, at 36 the youngest man to be nominated for president, delivered his "Cross of Gold" speech at the Democratic National Convention at the old Chicago Coliseum in 1896, the Democrats thought their "Boy Orator of the Platte" was irresistible, unstoppable and inevitable. So did the Republicans. The crowds were frenzied and passionate. He was the candidate of change, "the man we have been waiting for." William McKinley, the experienced war hero, had a quieter campaign style, and invited voters to his home in Canton, Ohio, to listen to him speak from the front porch.

When a man sent Bryan a rabbit's foot for good luck, soon others did, too, and thousands of rabbits lost their feet. "If all the people who have given me rabbits' feet in the campaign will vote for me, " the candidate said, "there is no possible doubt of my election." In the end, there weren't enough rabbits.

The German movie director Wim Wenders used the polished red marble of the Victory monument as a setting for his "Wings of Desire," about an angel who is reduced to mere mortal. Barack Obama might retire to a friendly front porch to reflect on whether there might be a lesson here.