12 Hours of Terror: Just Another Weekend in Leftist-run America

Susan Stamper Brown
|
Posted: Sep 19, 2016 12:01 AM
Share   Tweet
The opinions expressed by columnists are their own and do not necessarily represent the views of Townhall.com. 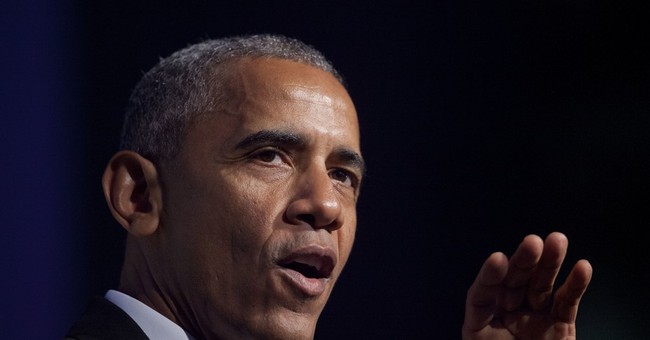 We live in a country run by people who tell us that if a man puts on a dress and says he’s a woman we are supposed to take him at his word. But, if a man goes on a murderous rampage in the name of Allah, and ISIS claims responsibility, we shouldn’t draw conclusions.

The weak and ridiculous position in which we find ourselves did not happen on its own. Americans elected this band of leftist fools who have zero aptitude for dealing with terrorism. A quote from King Solomon, the wisest earthly leader to ever grace the planet comes to mind:

“As dead flies give perfume to a bad smell, so a little folly outweighs wisdom and honor. The heart of the wise inclines to the right, but the heart of the fool to the left. Even as fools walk along the road, they lack sense and show everyone how stupid they are.” (Ecclesiastes 10:1-3)

Thanks to those whose hearts incline “to the left,” the terrorism which was once a rarity in America can happen anytime and anywhere.

In a 12-hour span over the weekend, we saw that it is not safe to shop in a mall in Minnesota, or run a 5k in New Jersey or walk in New York City without risk of terrorism.

“Rest assured,” they tell us, “justice will be served.” Of course, they are always quick to remind us to not make assumptions. Heaven forbid we offend someone’s sensibilities.

The beautiful fragrance of the American way of life is being overtaken by the stench of dead flies resting on the laurels of political correctness.

Fox News reports ISIS claimed responsibility for the shopping mall stabbing spree saying the attacker “asked at least one victim whether they were Muslim and referenced Allah.” The group posted this public statement on AMAQ, a news agency known for speaking for ISIS: “The executor of the stabbing attacks in Minnesota yesterday was a soldier of the Islamic State and carried out the operation in response to calls to target the citizens of countries belonging to the crusader coalition.”

Apparently, this information wasn’t enough for the FBI to draw conclusions about the motive of the stabber which the Somali-American community in St. Cloud quickly identified as Dahir Adan.

According to the  St. Cloud Times: “Like the police, Minnesota FBI spokesman Kyle Loven declined to say Sunday if investigators believe the attack was a terrorist act.” Nor was it enough for Police Chief William Blair Anderson who  “pointedly declined to call the attacks an act of terrorism, saying the motive isn’t yet known,” reports a local paper.

Meanwhile, in New Jersey, a pipe bomb-like explosive device detonated along the route of a 5k charity race to help Marines and sailors, and in New York City, 29 people were injured when an improvised explosive device went off in a Manhattan neighborhood.  Business Insider reports that after the explosion, officials later found a “pressure cooker with an apparent mobile phone attached to it and wires protruding.”

And the mayor overly obsessed with controlling what New Yorkers eat immediately called the bombing “a very serious incident.”

Later at a press conference a reporter grilled  Mayor Bill de Blasio asking, “How can you say there is no link to terrorism when the Inspire magazine published instructions on how to build one of these pressure-cooker bombs, like the one used in the Boston Marathon bombing?” De Blasio dug in his heels, saying it was “a very serious incident,” and reiterating “we have a lot more work to do to be able to say what kind of motivation was behind this…”

Apparently, the mayor couldn’t get his sodium-free tongue to utter the word “terror,” proving to us just how true the Bible verse is: “Even as fools walk along the road, they lack sense and show everyone how stupid they are.”