Susan Stamper Brown
|
Posted: May 03, 2016 12:01 AM
Share   Tweet
The opinions expressed by columnists are their own and do not necessarily represent the views of Townhall.com. 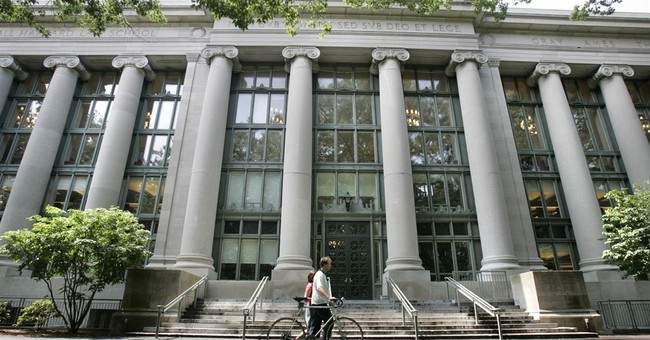 A new Harvard University survey shows that 51 percent of young Americans don’t support capitalism --which goes to show you that higher education can’t fix stupid -- especially when it’s flowing from the mouths of anti-capitalist educators who, when you’re listening to them, make you envious of every deaf person you’ve ever met.

These educators take advantage of their captive audiences, rambling on with their vast “knowledge,” mistaking the blank stares and half-smiles in the room as “interest,” having no idea that if they heard themselves in playback, they’d probably stab themselves with their pointing sticks.

So, before all you anti-capitalists jump on the socialism bandwagon, why not first take a look at what’s happening in Venezuela, that pitiful place on the globe where it takes a wheel barrel full of cash to buy a hot dog. Literally.

I know, American socialists are far above eating hot dogs, and probably prefer munching on exotic tree bark, but if a hot dog is what’s available thanks to your beloved socialism, needing a wheel barrel full of cash to buy one is a bit much, wouldn’t you say?

To be frustrated with the free market system is fair, but it’s unreasonable to believe that the temporary economic downswing in 2008 makes the case for ditching capitalism altogether. To further suggest that socialism is a viable alternative to capitalism is ludicrous.

Obviously, some students believe this, based on the Harvard survey. But don’t blame the students, blame the educators who say what they say more out of necessity than conviction. Just like everything else in life, follow the money and you’ll find the motive.

Like parasitic leeches which attach themselves to a host for survival, public universities (and private ones like Harvard through grants), receive large portions of their funding from federal and state governments.

Cut off that lifeblood and the subsidized ivory towers come crashing down, allowing those who have little to no experience in the free market -- but slander it anyhow – to experience the real world, vis-a-vis poor Venezuelans suffering at the hands of big government anti-capitalists like them.

Irony. It happens, like the “Walk-Ins Welcome” sign I saw planted in front of a cemetery. Or the “Prophecy class cancelled due to unforeseen circumstances” message a church once posted. Or, in the case of our ivory tower educators, Venezuela happened -- amidst their attempts to paint a rosy picture of socialism, omitting from their lectures historical facts about the collapse of communism in the Eastern bloc.

Allow me to describe what socialism looks like in 2016:

Now Venezuela has a shortage of over 75 percent of basic necessities like medicine, food, toilet paper and hygiene items, forcing Venezuelans to forage for food (tree bark comes in handy) and wait in ration lines. Citizens are required to use “fingerprint cards” for purchases in government-run supermarkets where individual consumption is rationed along with government rationing of water, electricity and gasoline. To no surprise, politically-related arrests, killings and executions are prevalent.

Experts fear famine is next because the government cannot afford to import goods. It can’t even afford to pay for the worthless money it contracted out to be printed last year. The government blamed food and toilet paper shortages on Venezuelans, accusing them of overeating.

The International Monetary Fund says this year Venezuela’s inflation rate will rise to 500 percent, while other experts predict 700 percent. That’s why you need wheel barrels loaded with worthless cash to buy hot dogs. Venezuela’s run out of other people’s money as well as its own, making the case that capitalism’s not so bad after all.