Declaration of Genocide is a Big, Fat, Juicy Nothing Burger

Susan Stamper Brown
|
Posted: Apr 05, 2016 12:01 AM
Share   Tweet
The opinions expressed by columnists are their own and do not necessarily represent the views of Townhall.com. 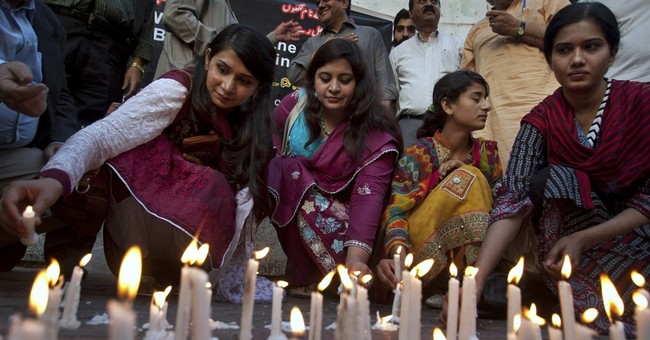 Words matter. Especially words, which when spoken can save lives. But without action, words are empty…worthless…meaningless, especially when we’re talking about genocide.

Such are the words of the Obama administration, an administration so preoccupied with majoring on minor things like waging a war on prescription drug abuse, it barely has time to notice the things that really matter. So after biting its tongue for way too long, the administration finally mustered-up the energy to choke out a few conciliatory words, acknowledging that the mass killing of Christians in the Middle East is indeed genocide.

What a pity that the administration withheld those potentially lifesaving words, remaining so questionably silent for the longest time in the face of evil. Obama knows better. After all, back in 2008, a then-Senator Barack Obama acknowledged the undeniable importance of mere words in a speech saying, “Don’t tell me words don’t matter.” Words absolutely matter, especially when uttered by the leader of the free world, quite possibly making the difference between death and life for the untold numbers of religious minorities tortured and killed because of their faith in the Middle East.

It’s hard to say why it was so grueling for the administration to speak up and say the word “genocide.” After all, the European Parliament, the United States Commission on International Religious Freedom, the Kurdish and Iraqi governments, German Chancellor Angela Merkel, Pope Francis and the U.S. Catholic bishops had already called it by its proper name. Back in November, even Ted Cruz openly acknowledged that ISIS was primarily subjecting Christians to genocide in the Middle East. And not long ago, the U.S. House of Representatives overwhelming approved a resolution at 393-0, defining these atrocities.

Why was it so hard for the Obama administration to be straight with the American people about what’s happening in the world? Obviously, it still is. To wit, on Easter Sunday, courageous Christian families innocently gathered at a park in Lahore, Pakistan to celebrate the resurrection of their Lord and Savior Jesus Christ when an Islamic suicide bomber chose to blow himself up, killing more than 70 people and injuring hundreds more, according to Reuters.

A group connected to ISIS, the Pakistani Taliban, quickly acknowledged they targeted this particular crowd because of their Christianity. Guess what? In its initial statement released in response to the attack, the State Department left out the most important detail, that the victims were Christians celebrating Easter. It wasn’t until after it was repeatedly criticized that the State Department eventually garnered enough courage to make the correction.

What’s wrong with these people?

If the Obama administration hasn’t the appetite to use the right words, there’s little hope it will follow through with much-needed action. According to ABC News, “a senior aide to [Secretary of State] Kerry said it does not necessarily mean changing military strategy” in response to the State Department’s declaration of genocide. And who is surprised?

While calling it genocide is a step in the right direction, the declaration really amounts to a big, fat, juicy nothing-burger – unless it’s followed up by taking action.

And so it will continue, further displaying that words alone prove impotent in the face of a fast-paced evil bent on the destruction of everything that’s good and right. While the administration’s long-delayed acknowledgment of genocide raised awareness, surely the annals of history will not be kind in its recollection of an administration so weak, so ideological and out-of-touch, it always found itself unfashionably late in attendance to the things which really matter.