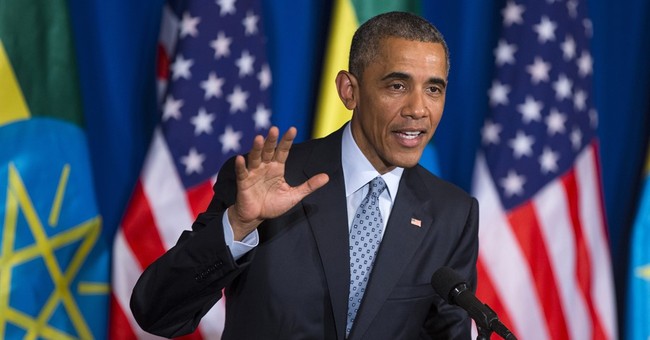 President Obama told the BBC he's "stymied" because he's not gotten his way regarding gun control --yet. So, apparently we should just relinquish our guns during a Second Amendment burning ceremony on the National Lawn.

Nevertheless, we should submissively fall in line, believing the government will protect us. And crazy people who prey on the innocent in gun free zones like schools, theaters, churches and military facilities will voluntarily lay down their arms, too. Sure.

Of course, we have no reason to protect ourselves from ISIS, although according to the FBI, ISIS-connected young Muslim men are radicalized in all 50 states. Nor would we ever need to protect ourselves against a tyrannical government like those crazy old white men, America's Founders, wrote about in the Constitution.

Oh, and we're supposed to believe Obama really wants gun control legislation to be passed the "old-fashioned" way, with Congress making laws, when he's already cranking out executive orders like a Chinese sweatshop?

Every time there's a mass shooting, we're told now is the time to hop on the gun control bandwagon. We're expected to ditch logic, facts, and common sense - or statistics proving gun control never works. We should overlook irritating facts like lawlessness prevails in places which already have stringent gun laws like in the president's hometown of Chicago, Illinois. Or Baltimore, Maryland, which, incidentally, made the "25 Most Violent Places in the World" list in 2013 and 2014, along with Ciudad Juarez, Mexico, Baghdad, Iraq and Mogadishu, Somalia and Muzaffarabad, Pakistan.

I guess we should just chalk it up to coincidence when non-partisan groups like the Institute for Policy Innovation tell us that 16 out of 20 of the U.S. cities with the highest violent crime rates, like Baltimore, are run by Democrats. Must we overlook the possibility that the policies and practices of liberal leaders from the party that booed God during their 2012 convention inspire crazy people of all political leanings to do crazy things? Should we ignore statistics showing despite Maryland's highly restrictive gun laws, Baltimore's homicides increased in the first five months of 2015 by 43 percent, and non-fatal shootings by 82.5 percent? When recently asked about the chaotic mess that is Baltimore, White House Press Secretary Josh Earnest says more gun laws should help. Help who? Might it be time to address that more laws won't fix a spiritual problem? People can't even keep Ten simple Commandments.

Are we really supposed to believe criminals care about regulations? China's a perfect example because it's largely illegal for private citizens to own and sell guns. Possession or sale of them leads to anywhere from a 3-year prison term to the death penalty. The Chinese government values human life like Planned Parenthood values babies, therefore, it's obvious these gun laws are not devised to protect citizens, but the other way around. Even still, crazy people find a way around the rules. As I've written before, the same day the Sandy Hook shootings happened, with no guns available, a crazy, knife-wielding Chinese man stabbed almost two dozen kids at a central China elementary school. He did that despite the fact the government had recently banned knives after a spate of deadly knife and cleaver attacks on school kids that left 20 dead and 50 wounded.

Take away guns and crazy people will use knives. Take away knives and they'll use something else until everyone's forced to eat steak with teaspoons.