Sue Thayer
|
Posted: Mar 23, 2020 11:37 AM
Share   Tweet
The opinions expressed by columnists are their own and do not necessarily represent the views of Townhall.com. 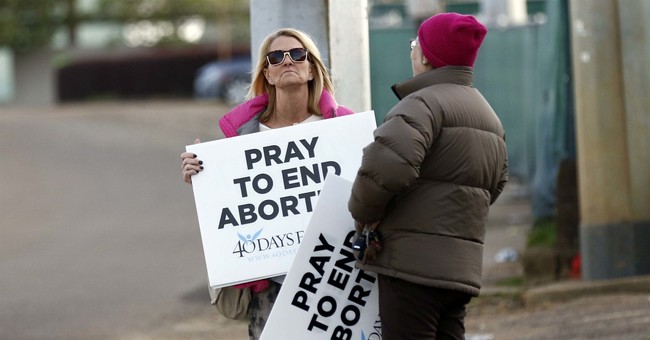 I’ve often said, “If you have to get fired, Planned Parenthood is a good place to be fired from.” I know from experience.

As a longtime manager at the country’s largest abortion chain, I was often recognized as “Employee of the Month” or as a “Star Performer.” But when Planned Parenthood in Iowa announced plans for non-medical staff to do high-risk chemical abortions, I shared my concerns and was promptly terminated.

I turned down a hefty severance package designed to buy my silence about the abuses I saw during my 17-year career at Planned Parenthood.  With kids depending on me to provide for them, I was nervous, but God provided in ways I could have never imagined. Today, I’m praying that a certain abortion worker at Planned Parenthood’s Pittsburgh abortion facility might also lose her job and find the forgiveness, healing, mercy and peace that I found after losing my position.

This Planned Parenthood in Pittsburgh is among the more than 500 abortion clinics around the world that was covered by a 24/7 prayer vigil held by the pro-life organization 40 Days for Life as part of the spring campaign that recently halted due to COVID-19 concerns. Holding a public prayer vigil during a pandemic comes with its fair share of challenges and opportunities. On the one hand, the praying volunteers have seen many mothers choose life for their child as a result of seeing the genuine prayers during these difficult times. However, on the flip side, many vile acts against the volunteers have been committed, the worst of which came from an enraged employee of the Pittsburgh Planned Parenthood.

Upon leaving the building, the worker turned and leaned toward a stunned vigil participant and launched into a deep, barking cough directly into their face. The furious worker then made an obscene gesture and stalked away.

In the wake of COVID-19, this kind of attack from a medical worker that directly disregards CDC cautions is truly saddening. But as a former member of the abortion industry, I also understand.

I well know the hardness-of-heart that comes from doing, selling and marketing abortions day in and day out. The job pays very well, and it doesn’t take long to be brainwashed into believing that you are “helping women” and the lie that sometimes abortion really is the only option.

I know from experience how this kind of conditioning that makes the evilest acts seem necessary or routine can desensitize someone to what is decent. This assault from the Pittsburgh Planned Parenthood worker was more than a display of disdain for freedom of speech: it was yet another example showing that the abortion industry operates on an agenda, and it isn’t to save lives or even help them.

Planned Parenthood of Western Pennsylvania should do the right thing and fire the worker who intentionally coughed on the volunteer in the wake of COVID-19. Someone who would deliberately risk spreading a deadly disease to a peaceful prayer volunteer has no place representing a billion-dollar industry—even if it is an abortion business.

Getting fired from Planned Parenthood was the best thing that ever happened to me. God willing, it will be the best thing for this worker to get out and have a change of heart.