Steve Sherman
|
Posted: Aug 29, 2017 11:03 AM
Share   Tweet
The opinions expressed by columnists are their own and do not necessarily represent the views of Townhall.com. 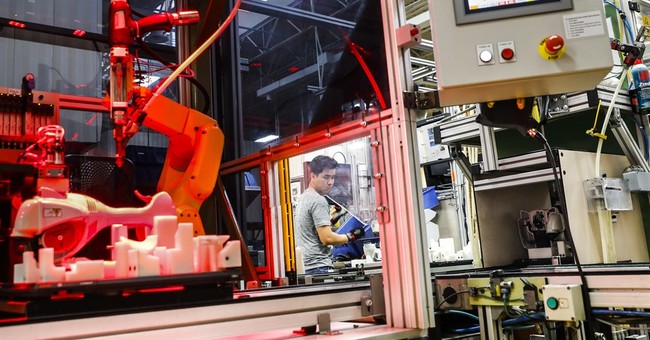 Several American companies each with more than half a BILLION in government contracts for 2017 are lobbying to Congress for the ability to hire more foreign workers. Wouldn’t it make sense to hire American workers to work in these American companies on projects that are funded by the American Government? Doesn’t that sound logical and non-partisan?

Why wouldn’t we want to put America first?

Politicians of every stripe are always talking about the unemployment rate. They usually are spinning how their ideas will make it go down or keep it low. They might toss in some rhetoric about how their opposition will send the jobless rate through the roof. Whether you’re a progressive liberal, proud independent, or firmly committed to Making America Great Again…we should all agree on this.

When a company is built on United States government contracts it should seek out Americans to do the jobs.

Both parties could claim a win. Democrats and Republicans…all Americans would be working and lifting the entire boat. This seems like common sense, but apparently that is in short supply in certain sectors of the job market and in the headquarters of some of our largest companies.

The “Big Three” companies you need to know who are actively lobbying for more H1B Foreign Workers Visas rather than figuring out how to hire qualified Americans are IBM, Accenture, and Deloitte Consulting. Each of the big companies have more than $500 million dollars in government contracts in fiscal year 2017. In case you are unfamiliar with the H1B Visa, it is basically a visa that allows a company to bring in a skilled worker from a foreign country to do an American job.

This process literally takes an American job and hands it to a non-American. It is particularly repugnant when you realize that American taxpayers are funding the projects that keep these companies in business, but they return the favor by giving the job it created to someone from another country. Putting Americans first seems like a no-brainer. A win for the country in every way.

These three companies are choosing to spend large sums of money lobbying the government to let them bring in more foreign workers is an insult. They could have spent those lobbying millions on a training program for Americans to fill those jobs with someone born right here on American soil.

This has nothing to do with the foreign worker being skilled or a good person. They may very well be great people. I’m sure they are excited to get a legal way into America and right now, no waiting around. I get that. I would do it too if I was a foreigner, but for these big companies not to be caring for their own citizens and neighbors first is an outrage. They take the government contract and immediately look right outside of our own borders to fill the job it created.

Congress should deny their lobbying efforts. They should take it a step further and require these companies to fill the jobs created by the government contract with Americans. It’s not too much to ask and actually makes sense. If they are unwilling to hire Americans…maybe they should lose that government contract. It’s really that simple.

Steve is an author, popular radio commentator, and former Iowa House candidate. His articles have appeared nationally in both print and online. His most recent novel, titled Mercy Shot, can be found on Amazon or at www.scsherman.com For political and culture commentary with a bit of sarcasm go to www.writeonsherm.com Steve can be reached at steve@scsherman.com