Good News – Progressives Once More Assure Us Islam is our Friend 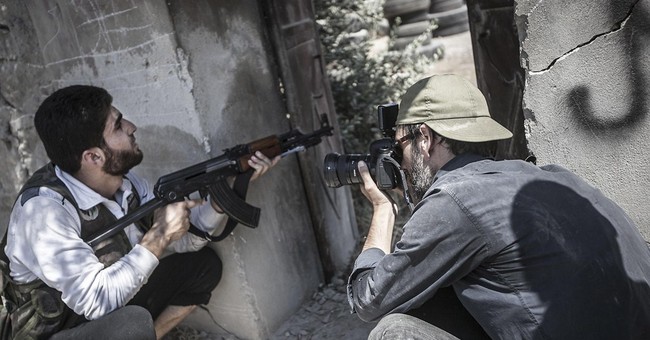 My home state is allegedly about to get blasted with its first winter storm, but I don’t plan on letting it slow me down one bit.

See, inspired by today’s progressives, I believe I will be able to carve a path through the snow and live a life unfettered by the reality that may choke other people. Weather’s nasty judgmental streak will crash into my Mizzou-inspired safe space, and not a finger will be lifted in the service of that taunting shovel in my garage.

I will not be triggered into accepting the blizzard’s cold, hard truth. For I am Rudolf the Red Nose Reindeer and I can fly.

Oh, what a marvelous world of possibility and freedom has opened up for me since I first heard those marvelous words of Hillary Clinton and Barack Obama last week. Words that shot through the terror and death that clouded the streets of Paris with their wonderful existential alchemy.

Whereas it felt like there was no place to hide, the blizzard of fear in my mind was no more. I was handed pure wisdom and truth. I was handed a gift of magic like some kind of fortune cookie for the soul. And it read:

“Islamic State has nothing to do with Islam.”

Don’t just take my word for it, though. Let heaven and nature sing, Killary!

“The bottom line is that we are in a contest of ideas against an ideology of hate, and we have to win,” she said while campaigning to become granter of wishes. “Let’s be clear, though, Islam is not our adversary. Muslims are peaceful and tolerant people, and have nothing whatsoever to do with terrorism. The obsession in some quarters with a clash of civilization, or repeating the specific words radical Islamic terrorism isn’t just a distraction, it gives these criminals, these murderers more standing than they deserve. It actually plays into their hands by alienating partners we need by our side.”

Yes, pay no mind to those blood-curdling shouts of ‘Allahu Akbar’ that escorted all those bullets into the flesh of the 130 dead infidels…err…I mean “crime victims.” Instead, sit back and watch while all those “moderate Muslim nations” come to our side now because of the future first female president’s awesome sauce…err…I mean “diplomacy.”

Well, it worked in Benghazi, didn’t it?

Besides, Killary and I are tired of your perverse judgments about religion. Now excuse me why I check in on what’s happening with that tremendous lawsuit against the totally unsexy Little Sisters of the Poor. And never mind President Obama’s effort earlier this year to deport a German homeschooling family for being the wrong kind of refugee. You know – the Christian kind.

The right kind of refugee come from the land of Trojan Horses called Syria, you see. Because that’s what President Obama says and the president never lies. Unless it’s about executive amnesty being illegal, believing marriage is between a man and a woman, and that whole if you like your healthcare you can keep it. But come on, who’s keeping score here?

“The idea that somehow (Syrian refugees) pose a more significant threat than all the tourists who pour into the United States every single day just doesn’t jive with reality,” Obama said. “So my expectation is after the initial spasm of rhetoric, the people will settle down, take a look at the facts, and we’ll be able to proceed.”

Apparently the Marxist in the White House forgot to confer with his closest allies, otherwise known as five of the richest Muslim nations in the Middle East. Collectively they have decided not to import a single Syrian refugee because of…wait for it…wait for it…you guessed it – national security concerns.

It’s so simple. C’mon, man, get with reality. Didn’t Marie Harf’s fact sheet lecture us that your average jihadi is just a frustrated minority looking for a job from his Caucasian colonialists? Next she’ll tell us a six-minute video from Islamic State vowing to bomb the White House is really a Happy Winter Solstice card.

It’s funny how misunderstandings happen all the time when Islam runs into the West. Kind of like when 18-year-old Faisal Mohammad stabbed some folks a few weeks back while taking a study break the University of California Merced.

Sure, he was found to have an ISIS flag and wrote a manifesto with reminders to behead students and praise Allah, but what happens in Vegas stays in Vegas. Kids need to sow their oats sometimes as a campus police officer shoots them down before they hurt somebody else.

And even then, some of the “teachers” at Merced were there to correct the record about what ultimately sent young Faisal to his death. It sure as heck wasn’t Islam, you bigot. No, it was his broken masculinity.

“So when you have this limited ability to sort of express your emotions and possible feelings of emasculation, of low self esteem, how do you really [deal with] that? A lot of times they engage in violence,” said one of the campus baby-sitters with tenure.

If only young Faisal was as good at wishing his problems away as our current progressive leaders are. Then he could have skipped right past the religious death cult and got the feminist boot camp training he really needed. Or maybe declared “I feel pretty” and made the cover of Vanity Fair.

There is no jihad, and these are not the droids you’re looking for. Just like there is no blizzard coming to shut my state down. I am the master of my fate. I am the snow blower of my destiny.

Thanks to Killary and Obummer, it turns out there’s nothing we can’t conquer—other than our enemies.