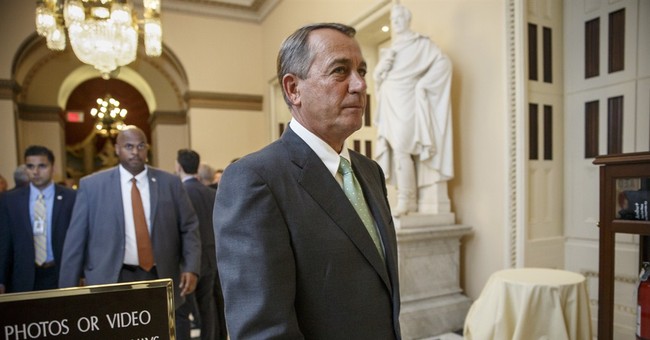 The best line from this hilarious episode came from Homer’s precocious daughter Lisa, who sarcastically tells her father on the eve of his day in court, “Good luck with your phony, trumped-up lawsuit dad.”

She might as well have been talking to today’s GOP leaders.

Never ones to bypass the moment to bypass the moment, Republican leaders are masters of constructing fig leaves to cover their cowardly shame. Their favorite these days is the threat of the lawsuit against a lawless president, which is a little bit like suspending a miscreant student for truancy. The Marxist in the White House wears his lawlessness like a badge of honor. Meanwhile, Republican leaders make Barney Fife’s one bullet look like a weapon of mass destruction.

The GOP’s toy gun of choice is nothing more than a taxpayer-subsidized kicking of the can down the road. For as the wheels of injustice turn slowly, you and I pay for the pricy billable hours accumulated by the lawyers on both sides, of course. Because, less government or something. The Republicans know these lawsuits are full of sound and fury, signifying nothing. They just don’t think you know they’re the political equivalent of empty calories, fulfilling nothing but the coffers of trial lawyers (most of them Democrats). They think you’re stupid enough to be patronized by sensational lamestream media headlines about them suing Obama.

For example, the Speaker of the House, a Republican, controls the power of the purse and could defund all Obama lawlessness. The Senate Majority Leader, soon to be a Republican, could refuse to confirm any Obama Regime nominees outside of vital national security positions. The Congress, with its most Republicans since before the Great Depression, could pursue impeachment. State governors and legislatures, a majority of them Republicans, could refuse to provide state services such as driver’s licenses, thus denying the infrastructure to implement Obama’s illegal alien invasion.

So the end of American Exceptionalism it is then.

At this point Obama might as well announce he’s going to bypass the Constitution again by running for a third term. All the Republicans will do is file a lawsuit that won’t be decided by the time Obama’s fourth term comes to an end. Heck, maybe John Boehner will again tell Obama “do what you got to do.”

What does Obama have to do for Republicans to stop him?