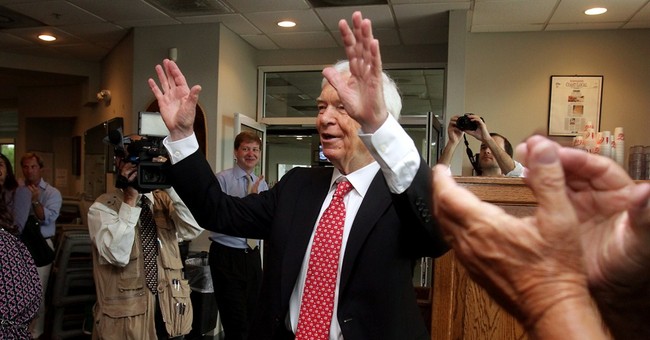 What transpired in the Mississippi Senate run-off is a red line for many conservatives across the country, because the Republican Party establishment essentially took a civil war and escalated it to a war for independence.

It’s one thing to oppose your base in a primary. It’s entirely another to despicably play the race card against your base, and bolster the legitimacy of the propaganda of our race-baiting opponents on the Left. But that’s exactly what the Kamikaze pilots running the GOP did. As a result, Chris McDaniel won Republican voters handily on Tuesday, but still lost the run-off statewide thanks to a 43 percent increase among voters in counties President Obama received at least two-thirds of the vote in 2012.

In other words, the GOP establishment used Obama/Alinsky race-baiting tactics against their own base, in order to drive out to the polls in a GOP primary the same low-information-voters that put and kept this Marxist in the White House (which I document here). An unpardonable sin considering there is no reason to go scorched earth against your own base in solidly Republican state except to send a message.

That message is this: if you threaten our corporatist gravy train we will go harder after you then we ever have Democrats.

Now that the message has been sent, there will not be an Appomattox moment in this conflict, when the two sides come back together after one of them has proven his point. The end result of this conflict will either be the defeat of the occupying army (the establishment) or conservatives will Dunkirk (bolt the GOP en masse). I say this not as someone who advocates a third party, although I’m asked about it frequently. My typical response to the question is “I’d like to see what a second party looks like first.”

But as Erick Erickson at Red State pointed out this week, it’s become clear those of us who still cling to the principles in the party platform have become the “Republicans in Name Only.” The old Reagan coalition is still there in population, but it no longer exists as a presence within the GOP. Years of betraying its base has put the GOP establishment in a bind. They can’t raise money off their base anymore, so they have to raise the money it takes to remain in power from corporatist lobbyists. Except pursuing the policy aims of those corporatist lobbyists enrages the base all the more, and the vicious cycle of dysfunction continues.

Thus, the GOP is now a shaky coalition of corporatists and constitutionalists. A coalition that is growing shakier by the day, because these two sides aren’t having a mere debate about tactics and issue priorities. They have different values altogether. A point the establishment drives home every time they say and do worse things to us than they would ever say and do to Democrats. For they have more in common with Democrats than they do us.

So what do we about it?

At this point developing a credible third party is a Herculean chore legally and financially. That is probably a generational event given the monopoly the two-party plutocracy has created. Nonetheless, organically and spontaneously we are heading down that road one way or another. It’s just a matter of how long it takes and which side leaves to form it.

However, liberty in America likely doesn’t have time for a generational event to transpire. We are now debating existential questions as a people that are beyond the traditional left-of-center, right-of-center debate the two parties have been having since the New Deal. Today’s Democrat Leaders are no longer bleeding-heart liberals but hard Leftists. They’re Social Reconstructionists with Marxist tendencies.

Meanwhile, the base of the GOP is growing more conservative and libertarian in response to this new ideological threat. We recognize we cannot negotiate with the New Left, but must defeat it. The problem is the GOP establishment often acts as a de facto human shield for these Statists, so we rarely get a clear shot at them on a national stage. Between now and the 2016 election cycle I recommend a two-point plan to try and tip the scales in our favor.

All these people do is take the power of incumbency and nullify our movement with our votes. Solidly red states/districts ought to be represented by movement conservatives without exception. If they’re not, we have learned the hard way we’re no longer choosing “the lesser of two evils.” We’re choosing people who will score points repeatedly for the other team while wearing our uniform. We cannot defeat the Democrats until we defeat the GOP establishment, and we can’t do that until we stop empowering them.

2. Coalesce early behind the non-establishment presidential candidate with the broadest conservative appeal.

If we aren’t successful in implementing this plan, I believe we will see the GOP implode shortly after losing again in 2016. Look at what happened in York, Pennsylvania, earlier this year for an example of what will come next.