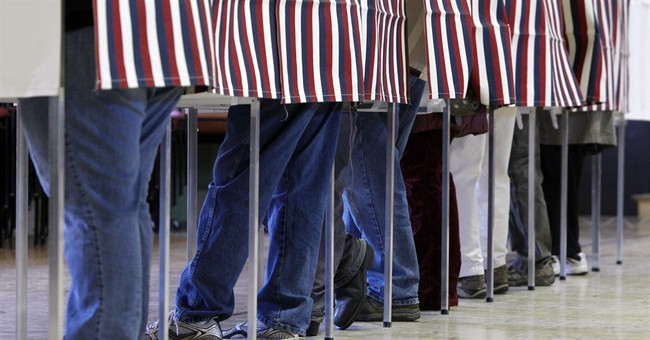 Last week I invited every Townhall reader to try and be the first to win $100 out of my own pocket, by giving me one legitimate reason why requiring folks to show a valid photo I.D. before voting was “unfair.”

However, most of the many emails I received in response were similar to the following snarky examples:

I have an answer for why requiring ID for voting is unfair. It is because it makes it harder for Progressives to win elections and wield control. And to Progressives, that is obviously unfair.

You will never get a logical answer because Progressive Political Correctness is Reality Challenged. It is a fake world that cannot survive facts and reason. That is why they have to shut up or shout -down their opponents, usually in the vilest of ways. It is easy to see when one learns to read Progressive and understand that their words mean something else in their fake world.

So as long as you don't accept their warped worldview your $100 is pretty safe.

It gives M$M (mainstream media) an amount of fabricated news coverage on Election Day to sell their phony stories.,/p>

The question is, "why it is "unfair" for a person to be required to show a photo ID to vote?" I will answer not as the ultra-right wing conservative that I am, I will instead use a liberal thought process and answer.

It is "unfair" to require a voter to show a valid photo ID in order to vote Because...It is not fair!

Steve, I had to dig deep into my liberal, emotional thought process and finally came up with the answer that wins. Since they only deal in emotions and you did not require any "truth" or "facts" that should do it.

When I was in high school (a half century and more back) there were inevitably squeals of “that's not fair" whenever a test was announced or homework was assigned. An English teacher gave the best definition I have ever heard of the phrase: it means "I don't like that" and nothing more.

Why is asking for a photo ID to vote "unfair?” It prevents illegal voting and election stealing. In what ways is that not "fair?” The speaker doesn't like it.

Give the $100 to the Salvation Army in my name.

There were a few people that attempted to rationally justify the notion that showing the same documentation to vote that is required to do almost everything else in our society was “unfair.” They all used the same argument as the following email:

Requiring photo IDs for voting constitutes a poll tax, which historically has been used to disenfranchise the poor, specifically poor minorities. Even in the few states where you can apply for, and be granted, a free photo ID still comes at some cost in terms of travel/lost wages/acquisition of other forms of identity needed to get a photo ID.

Poll taxes have been ruled unconstitutional by the Supreme Court for violating the Equal Protection Clause of the 14th Amendment.

I find it hard to believe that something this basic has never occurred to you/has not been pointed out by someone in your audience, especially given that it's been a common, and valid, reason why people oppose such laws. So you're probably aware of it, and simply too intellectually dishonest to concede that poll taxes are not only unconstitutional, but inherently unfair.

I doubt I'll be getting a check any time soon, though I'll be interested in seeing what mental gymnastics you employ to argue that requiring people to pay (in any way) as a prerequisite for voting is not 'unfair' in whatever reply you may send.

Before I begin my response to Ryan’s argument, is it just me or is it relatively impossible for Leftists to make an argument for their cause without sounding condescending, smarmy, or rude? Shouldn’t being “open-minded” and “tolerant” make one polite, courteous, and syrupy sweet?

As to Ryan’s point, in his argument he says the following: “Even in the few states where you can apply for, and be granted, a free photo ID still comes at some cost in terms of travel/lost wages/acquisition of other forms of identity needed to get a photo ID.”

One of those travel costs Ryan cited would be gas.

Thus, if Ryan is consistent in his, um, logic that all of these various levies on methods of transportation to take advantage of your right to vote should be eliminated as to avoid what amounts to a “poll tax,” I’m happy to send him $100.