Hispanics Have Much to Celebrate this Hispanic Heritage Month

Steve Cortes
|
Posted: Sep 22, 2018 12:01 AM
Share   Tweet
The opinions expressed by columnists are their own and do not necessarily represent the views of Townhall.com. 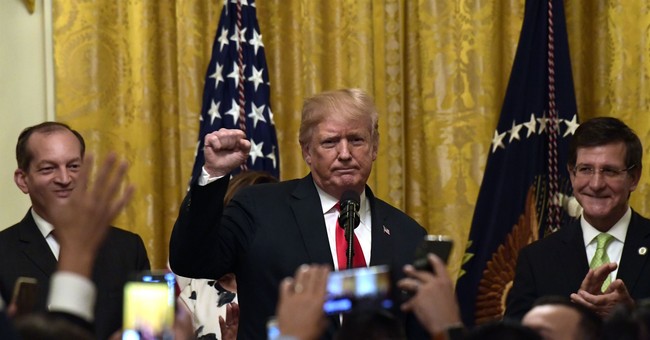 On Monday, I participated in the White House’s reception for Hispanic Heritage Month. President Trump told the enthusiastic audience: “Hispanic Americans enrich our nation in countless ways – from small businesses to support for our neighborhoods, and the innovations that improve our lives, and through military service that protects our people and our great American flag.”

The East Room of the White House erupted with a raucous affirmation more befitting a sports pep rally versus a White House event.  That reaction encapsulated the infectious enthusiasm that presently spreads across our land, and particularly for Hispanic Americans.

Consider that just short two years ago, small business owners and working families across the Hispanic community lacked hope and promise for the future. Yet, now we embrace growth and confidence previously unseen in this 21st century.

Fittingly, President Trump reaps the political benefits of this new era.  His popularity with Hispanics recently skyrocketed by a whopping 10 points. In the bellwether swing state of Florida, the President’s approval rating is 54 percent — higher than his popularity amongst whites in the Sunshine State.

A key driver of this trend is the President’s historic tax reform which sends small business optimism and hiring plans to all-time highs.  This start-up dynamism benefits the Hispanic community especially as Hispanic-owned business are growing far faster than the national rate, and Hispanics comprise the most entrepreneurial demographic in America.

The President highlighted one such visionary, Joel Garza of Texas who immigrated from Mexico as a teenager.  Joel began as a line worker for Sonic Burger and now owns 45 Sonic franchises of his own, employing over 1,500 workers, many of them Hispanic.  He credited the President’s reforms with his recent expansion of new stores and hundreds of new workers.

Garza’s story is not rare as President Trump’s policies spurred the lowest Hispanic jobless rates on record.  In fact, the Latino jobless rate has only been below 5% eleven total months in history, and an incredible ten of those months have been in 2017 and 2018. As impressively, while America overall enjoys the strongest wage growth in over a decade, Hispanics do even better with 3.7% median household income expansion.

In addition to making Latinos more prosperous, President Trump is also making our neighborhoods safer. In fact, despite the Democrats’ slandering efforts to secure our border and remove criminal illegal aliens as racist, most Hispanics actually support him.

Yet despite all the good President Trump is doing for the Latinos, Democrats still smear President Trump as some sort of anti-Hispanic bigot.  Thankfully, the Hispanic community won’t be conned by biased media and leftist propaganda anymore. Instead, Hispanics across the country rally to the reality of better lives, stronger communities, and unleashed opportunity.