Carrying Guns: An Issue for the Supreme Court and the Electorate

Steve Chapman
|
Posted: Jun 12, 2016 12:01 AM
Share   Tweet
The opinions expressed by columnists are their own and do not necessarily represent the views of Townhall.com. 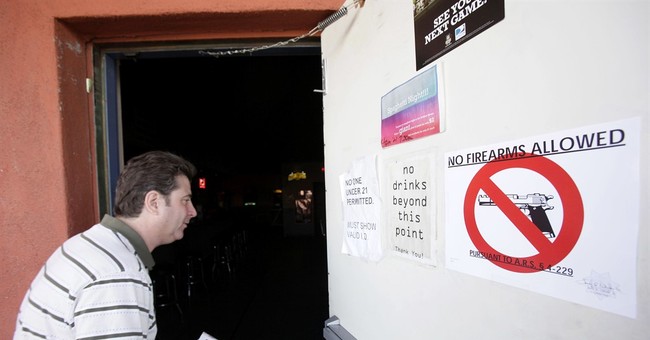 Trending
If there is any issue that could intensify the emotions and raise the stakes in the 2016 presidential election, it's guns. That issue just got cranked up to 11.

A federal appeals court ruled Thursday that the Second Amendment does not protect the right to carry a firearm in public. Another appeals court has reached a somewhat different conclusion, and the question is bound eventually to demand the attention of the Supreme Court.

On the general topic of gun rights, Hillary Clinton and Donald Trump strongly differ. He got the endorsement of the National Rifle Association, and she won the support of the Brady Campaign to Prevent Gun Violence.

He calls her "the most anti-gun, anti-Second Amendment candidate ever to run for office." She favors new restrictions she describes as "common-sense gun safety measures consistent with the Second Amendment."

What makes the debate so important is that the basic meaning of the amendment is still being figured out. The Supreme Court has found it guarantees an individual right to own a gun for self-defense -- as distinct from a collective right to bear arms in a state militia. But the justices have not ruled on the constitutionality of a variety of regulations.

One of those is California's policy on carrying concealed guns in public. It allows only those with permits to do so and is stingy in giving them out. Anyone who wants a license has to convince the county sheriff she has "good cause" for it. Among the reasons that don't qualify are "self-protection and protection of family (without credible threats of violence)."

A lawsuit challenged the constitutionality of the law. But on Thursday, the 9th U.S. Circuit Court of Appeals upheld it, saying, "There is no Second Amendment right for members of the general public to carry concealed firearms in public." The odd part was its admission that the Constitution may protect the right of citizens to carry guns openly. California doesn't allow that, either, but the open-carry ban, the court said, was not challenged in this case.

Its verdict diverges from a 2012 decision by the 7th U.S. Circuit Court of Appeals in Chicago, which struck down Illinois' near-total ban on concealed carry. "To confine the right to be armed to the home is to divorce the Second Amendment from the right of self-defense" recognized by the Supreme Court, that court concluded. "A right to bear arms thus implies a right to carry a loaded gun outside the home."

Sooner or later, the Supreme Court will have to decide who's right. How it would have ruled in Antonin Scalia's day was hardly certain. But its Second Amendment opinions imply that the Second Amendment prerogative to employ a gun for personal protection extends beyond one's front door.

In 2008, the court listed various restrictions it considered permissible: "prohibitions on the possession of firearms by felons and the mentally ill, or laws forbidding the carrying of firearms in sensitive places such as schools and government buildings, or laws imposing conditions and qualifications on the commercial sale of arms." The list's omission of laws against carrying guns in public was conspicuous.

The justices found that many 19th-century courts allowed states to forbid carrying concealed weapons -- while noting that some struck down laws against carrying guns openly. But the right to "bear arms" doesn't sound as though you are entitled just to sleep with a pistol on your nightstand.

If the right to self-defense applies beyond the home, states can hardly forbid law-abiding citizens to venture out in public without the means to protect themselves. A dissenting judge in the California case reached the sensible conclusion: States may ban concealed carry or open carry but not both.

The two landmark Second Amendment cases were decided by 5-4 votes, with Scalia in the majority. Without him, the eight remaining justices might be evenly divided on concealed-carry bans. So the next person to join the court could ultimately cast the deciding vote.

As a general, practical rule, it may not matter much how the Supreme Court finally rules on this question. Most states enacted permissive concealed-carry laws on their own and would keep them regardless.

But it matters in principle, and in some states -- like Illinois and California -- it matters in practice. To a voting public that includes nearly 13 million people with concealed-carry permits, it will certainly matter on Election Day.