In Defense of Rattlesnakes

Steve Chapman
|
Posted: Feb 28, 2016 12:01 AM
Share   Tweet
The opinions expressed by columnists are their own and do not necessarily represent the views of Townhall.com. 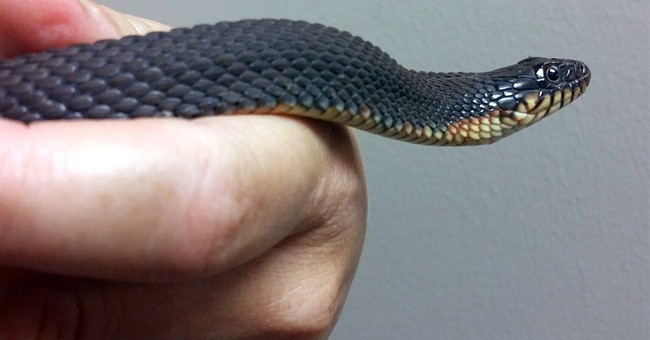 Trending
I was going to write this column about slimy, venomous reptiles that are so frightening you would go well out of your way to avoid them. But I'm tired of the presidential campaign. So I decided to write about rattlesnakes instead.

It's probably unfair to compare politicians to dangerous serpents -- unfair to the serpents, which normally mind their own business.

There is another big difference between the two: Not everyone detests rattlesnakes. These days, I am pleased to report, there are even people striving to protect them.

This development causes anxiety in Sweetwater, Texas, home of what is billed as the world's biggest rattlesnake roundup. Each year, hunters pump gasoline into burrows to flush out thousands of vipers so they can be captured and killed -- a method illegal everywhere but Texas. The tourists the event draws are an economic boon to the isolated town of 11,000.

Conservation advocates oppose the event, and particularly the use of gasoline, because it's not only inhumane to snakes but also harmful to other creatures -- including endangered tortoises and lizards. A state Snake Harvest Working Group was set up to consider the matter, and a majority of the members voted to prohibit the gassing of rattlesnake dens.

Things are looking even better for the rattlesnakes in Massachusetts, where the state's Division of Fisheries and Wildlife wants to create a refuge for them on an island in a large reservoir. The place would be off-limits to humans -- not to protect humans from the snakes, but the other way around.

Illinois also has a preservation effort. A few years ago, Lincoln Park Zoo set out to save the last population of eastern massasauga rattlesnakes in the Chicago area by collecting and breeding them. In 2014, the project yielded 13 baby rattlers to go with the eight adults.

Ventures like these would have seemed insane 50 years ago. But rattlesnakes are less dangerous than commonly assumed. No one in Massachusetts has been killed by one since colonial times.

Nationally, about five people die each year from poisonous snakebites, according to the Centers for Disease Control and Prevention. That compares to 90 or so who die from being stung by insects. And many fatal snake encounters occur only because the victim is, um, incautious.

In 2012, Steve Bennett, an official of the South Carolina Department of Natural Resources, told a local TV station that in his experience, at least 70 percent of venomous snakebites involve people trying to catch the critters -- and in most of those cases, alcohol played a role. If there is anything dumber than poking or grabbing a poisonous serpent, it's doing it after downing a six-pack.

I grew up in Texas, still visit there regularly, and have spent many hours tramping around rugged, rattlesnake-infested terrain. Because of my aversion to premature death, I keep my eyes peeled at all times. Yet I've seen only a couple of rattlesnakes in the wild.

The reason is not that my vision is poor. It's that these reptiles are reclusive and afraid of people. They generally strike only when they feel threatened. A rattlesnake has a brain the size of a pea, but that's enough gray matter for it to deduce that tangling with two-legged giants is unhealthy.

Rattlesnakes, granted, are hard to like -- being coldblooded, scaly and not pleasing to the untutored eye. Their rattle induces instant terror. Oh, and in the worst-case scenario, they can kill or maim you. Evolution apparently has wired us to regard snakes with fear and loathing, which makes it easy to tolerate the mass slaughter of them.

But Americans once tried to eradicate wolves, bears and mountain lions, all of which pose a danger to life and limb. The California grizzly, which adorns the state flag, was hunted to extinction. Today, however, most people regard such sharp-toothed predators as wonders worth traveling to see.

Rattlesnakes lack the charismatic appeal of these large, furry mammals, but their repulsiveness is not their fault. Being rational animals, people should be able to overcome our instincts, minimize unnecessary killing of rattlesnakes and act to preserve their remaining habitats.

In Larry McMurtry's novel "Lonesome Dove," cowboy Gus McCrae laments, "We killed off most of the people that made this country interesting to begin with." The same has been true with wild creatures. Life without rattlesnakes would be safer, but safety isn't everything.

One more thing in their favor: Rattlesnakes never, ever, run for office.