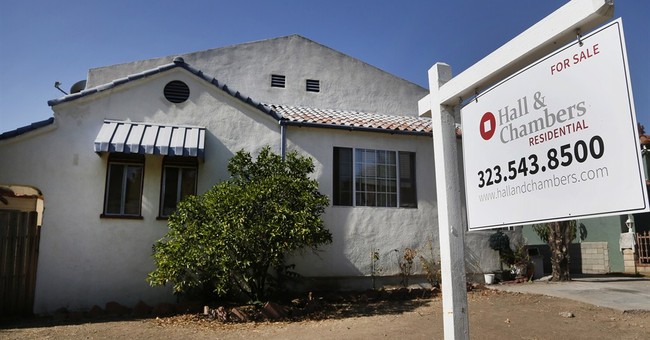 Trending
Plenty of people who go on wild drinking binges end up with sound reasons to avoid repeating the experience: painful hangovers, lasting embarrassment, ruined relationships, encounters with police. But that doesn't stop some of them from doing it again. Maybe these are the same people running the federally backed mortgage companies.

The possibility comes to mind because these two entities, known as Fannie Mae and Freddie Mac, have decided to lower the down payment they require on some mortgages from 5 percent to 3 percent. The horrific lesson of what results from encouraging marginal borrowers to buy homes has somehow vanished from their memories.

"Our goal is to help additional qualified borrowers gain access to mortgages," said Andrew Bon Salle, an executive vice president for Fannie Mae. The goal is one that a few years ago would have sounded uncontroversial: making it possible for more people to buy houses. Homeownership has long been taken to be a civic virtue, an economic boon and a central feature of the American dream.

But homeownership, as we have discovered, has a huge downside. It can be far more dangerous financially than renting. As long as real estate prices are rising, a mortgage serves as a vehicle for accumulating wealth. When they fall, it can destroy it just as quickly -- and upend lives in the process.

Between 2005, near the peak of the housing boom, and 2010, the default rate on home mortgages rose eightfold, according to the St. Louis Federal Reserve. Even today, it's five times higher than it was in 2005. The crash caused $6 trillion of household wealth to go up in smoke. It also set off the worst economic downturn since the Great Depression.

All that is ample reason not to return to the bottle. But Fannie Mae and Freddie Mac are doing just that, all while proclaiming their intention to remain sober.

They insist that they will limit the mortgages to creditworthy borrowers who can be expected to make their payments. But the new rules ensure the proliferation of loans that will not be repaid. Arnold Kling, a former Freddie Mac economist now at the Mercatus Center at George Mason University, says that under this new policy, the mortgage giants "are setting people up to fail."

One reason, he told me, is that "people who can come up with a bigger down payment have shown prudence, the ability to save and the willingness to save, which are all key ingredients in being able to repay a loan." On average, he noted, the lower the allowable down payment, the higher the delinquency rate.

Many borrowers who can afford only a smaller down payment will make good on their loans. But a disproportionate number of them won't.

One reason is that a borrower with only 3 percent equity in a house is far more vulnerable to a drop in prices than a borrower with 10 or 20 percent. A small decline could put her underwater. In that case, she would have a financial incentive to default.

A renter who loses his job or suffers an expensive medical calamity can easily move into a cheaper place. But a homeowner with no equity may not have a good option. She may not be able to afford the mortgage payment or the cost of selling the house for less than her mortgage. She may not be able to move to take a better job. She may find herself stuck, with foreclosure the likely outcome.

The danger here is not just to unlucky homebuyers. When things went south the last time, the taxpayers got dunned for $187 billion to rescue Fannie and Freddie. The two eventually paid it back -- but there was no guarantee they would. And there's no guarantee they will if they are someday bailed out again.

What we should have learned from the vast trauma we endured is that the federal government should stop trying so hard to enable Americans to buy homes. People in France and Germany lead productive and satisfying lives despite much lower rates of homeownership. More Americans have learned to do so since the bust.

By luring many of them back to betting their savings on the housing market, the mortgage firms are selling them an obsolete version of the American dream that puts us all at risk of another debacle. After the last mortgage binge, we woke up in the gutter. Isn't once enough?

Can’t see Russia from here: NYT exposé on Trump taxes a dud?
Hotair
NYT Drives a Stake Thru the Heart of Its Own Claim of What Trump Paid in Taxes, Lets Other Disturbing Info Slip Out
Redstate