Is Hillary Too Old? 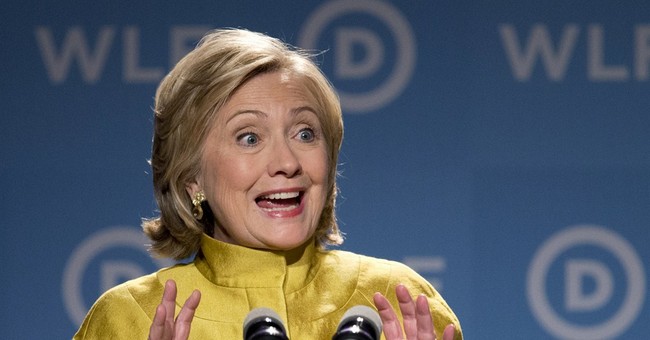 Are there good reasons to vote against Hillary Clinton? If you gave me some time -- like two seconds -- I could come up with some.

She's an unreformed hawk, a true believer in big government and a tedious speaker. During her 2008 campaign against Barack Obama, she waffled on immigration, disparaged free trade and compared her opponent, unfavorably, to John McCain.

She made false statements about her role in the 1993 White House travel-office scandal, defended her husband as he lied about Monica Lewinsky, lost records requested by prosecutors in another scandal only to find them two years later, and managed to make $100,000 trading on cattle futures in suspicious circumstances. She has offered no discernible reason she should be president beyond her resume and her sex.

If I had to come up with reasons (SET ITAL) not (END ITAL) to vote against her, though, the list is shorter -- including that, at 67, she's too old. But that's one that Republicans seem determined to flog.

Wisconsin Gov. Scott Walker, 47, raised the issue by saying he's in no rush to make a White House race because "I could run 20 years from now and still be about the same age as the former secretary of state is right now." In case anyone missed his point, he added that Clinton "embodies that old, tired top-down approach from the government."

Others have been less subtle. Senate Republican Leader Mitch McConnell, 72, flashed his trademark wit, saying the 2016 Democratic field resembles "a rerun of 'The Golden Girls.'" Kentucky Sen. Rand Paul expressed concern that she might not be up to the "rigorous physical ordeal" of a presidential campaign.

This line of attack should permanently debunk the charge that conservatives are inflexible. Paul showed no distress when his father, Ron, ran for president in 2012 at age 76. In 2008, McConnell's party nominated McCain, who was 72. Last time, it picked Mitt Romney, who may run again in 2016 despite being seven months older than Clinton.

The 1996 GOP presidential nominee, Bob Dole, was 73. Party idol Ronald Reagan was 69 when he took office -- the same age as Clinton would be.

This last comparison is not entirely fair to her. That's because age affects men and women differently. Today, a typical white female born when Clinton was born can expect to draw breath for another 20 years. Her genes are working in her favor: Her father lived to 82 and her mother to 92.

Her sell-date is the last thing anyone should worry about. "Were she to win in 2016," the National Journal reported in April, "Clinton would take office with the longest projected total life expectancy of any president in the modern (era)." Yes, even longer than Obama, whose projected lifespan when he took office was a mere 79 years.

McCain's life expectancy in 2008, according to the actuarial tables, gave him just another 12 years before expiring. That estimate didn't take into account the possibly life-shortening effects of the physical abuse he suffered as a prisoner of war in North Vietnam. But Republicans had no evident qualms about putting him in the Oval Office.

Reagan may be taken as proof that 69 is too old, because he reportedly showed signs of Alzheimer's disease during his second term. The risk that Clinton will develop it before 2025 is higher than if she were younger, but still low. In this country, only 2.9 percent of whites between the ages of 65 and 74 get it, and 10.9 percent between the ages of 75 and 84.

Senility is a risk that goes with senior citizen discounts, but age has compensations as well. Had Bill Clinton been 66 when he took office instead of 46, he might have left the interns alone. In 2008, McCain called Obama "a young man with very little experience." That was before the Arizona senator picked a running mate who was even younger and less experienced.

Even during his re-election campaign, at age 51, one conservative commentator called Obama "callow." If Democrats chose to nominate Sen. Kirsten Gillibrand, D-N.Y. (47), or Maryland Gov. Martin O'Malley (51), you would not hear a chorus of conservatives exclaiming, "Now I'll have to consider voting Democratic."

The real problem with Clinton is that in all likelihood she will remain vigorous enough to assure eight years of military crusading, budget expansion, economic meddling and irritating moralism. A dozing geezer, a burned-out comet, a spent volcano? Don't I wish.