What Went Wrong in Iraq 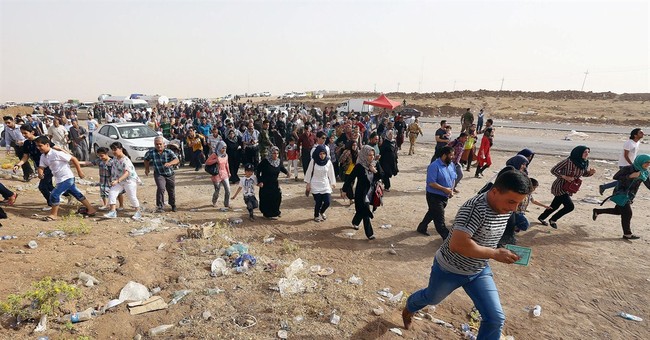 When the United States invaded Iraq in March 2003, Americans were told it would be a quick, simple project. When asked how long the war might last, Defense Secretary Donald Rumsfeld said airily, "Six days, six weeks, I doubt six months."

So what's the complaint today from those who advocated the war most vigorously? We left too soon.

Republican Sens. John McCain, Lindsey Graham and Kelly Ayotte put out a statement the other day blaming the recent rout of Iraqi government forces on "President Obama's decision to withdraw all of our troops from Iraq in 2011." That final pullout came in December of 2011, or more than eight years after Rumsfeld expected our war to be over.

The hawks have as much trouble remembering the past as they do predicting the future. They forget that the Status of Forces Agreement between the U.S. and Iraq, which mandated the removal of all American military personnel by the end of 2011, was signed by President George W. Bush.

It was also signed by Iraqi President Nouri al-Maliki. "In the end, the Iraqi leadership did not try to get a commitment through their parliament that would have made possible a continued U.S. presence after December 31," wrote Robert Gates, who was secretary of defense at the time. "Maliki was just too fearful of the political consequences. Most Iraqis wanted us gone."

Colin Kahl, who as a top Pentagon official under Obama tried to get an agreement to keep U.S. troops in Iraq, tells me that al-Maliki "was conscious of the extreme unpopularity of a continued U.S. presence with his Shia constituency. He had no interest in a sizable U.S. presence along the Arab-Kurd divide, which is what all our big troop options assumed." He also refused to give our troops the legal protections they get in other countries with U.S. bases, which was a deal-breaker.

Obama failed to secure the agreement, just as Bush had. Maybe the accord was impossible. If not, then Bush merits as much blame as Obama for the fact that it didn't happen.

Of course, the greater blame lies with Bush, since it was he and Dick Cheney who stormed into Iraq in search of weapons of mass destruction, with no understanding of its internal politics, the violence they were precipitating, or the immense difficulty of constructing a stable order in an alien land. The insurgency did not begin when Obama was inaugurated. It began in 2003, and it has never ended.

The Bush administration managed to tamp it down by flooding the country with an additional 36,000 U.S. troops in 2007. But the point of the surge was not merely to suppress the insurgency. It was to give al-Maliki the time and space to consolidate control, create reliable security forces and reconcile with Sunnis who felt imperiled. He didn't do any of this, and we couldn't do it for him.

The surprise of recent days has been the utter uselessness of the Iraqi military, in which the U.S. invested so much. Some units collapsed under attack by far smaller forces, with soldiers fleeing and changing into civilian clothes as quickly as they could. At this stage, the best hope for defending Baghdad lies not with government troops but with pro-government Shiite militias allied with Iran. Yes, Iran.

We could always ship the Iraqi army weapons and equipment. But we already tried that, with destructive results. The Washington Post reported that the insurgents "seized large quantities of weaponry from the security forces when they overran their bases, including vehicles, arms and ammunition that will help the group press further offensives. Much of the equipment was probably supplied by the United States, Iraq's biggest provider of weapons."

We could also resort to air strikes, drone attacks or even ground troops. But if eight years of fighting by the American forces didn't save Iraq from chaos, another round is not likely to make much difference.

The only answer the war supporters have ever had, since their absurdly optimistic initial predictions went awry, is to continue the war indefinitely. Col. Pete Mansoor, a top aide to Gen. David Petraeus when he was commander of our forces in Iraq, said the U.S. effort would have to go on for "many, many years to come." Another Petraeus adviser, Stephen Biddle, said "perhaps 20 years" would suffice.

How about forever? Except it might not be long enough.