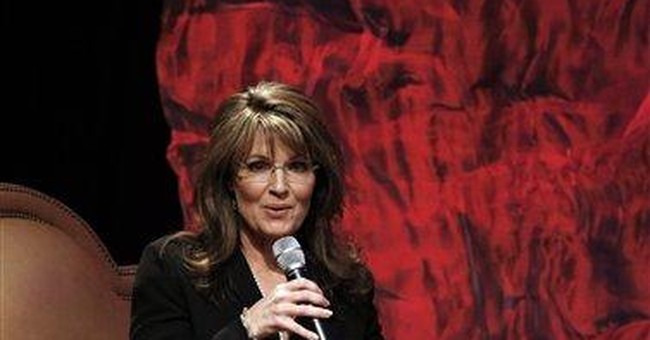 The tea party movement started as a welcome protest against the alarming growth of federal spending and federal control. It had a strong anti-statist flavor, or seemed to. But judging from the applause for Sarah Palin at its convention, the movement's suspicion of government power is exceeded only by its worship of government power.

Her keynote address at last week's gathering in Nashville may have been the curtain raiser on a 2012 presidential campaign. "I think that it would be absurd to not consider what it is that I can potentially do to help our country," she told Fox News when asked about that option.

I'm glad it was she and not I who first used the word "absurd" in relation to a possible Palin bid for the White House. Because if her speech made anything clear, it's that the shallow, ill-informed, truth-twisting demagogue seen in the 2008 presidential campaign is all she is and all she wants to be.

When it comes to economic affairs, the tea partiers agree that -- as Palin put it -- "the government that governs least, governs best." When it comes to war and national security, however, her audience apparently thinks there is no such thing as too much government.

The conventioneers applauded when Palin denounced Obama for his approach to the war on terrorists. Why? Because he lets himself be too confined by the annoying limits imposed by the Constitution. "To win that war, we need a commander in chief, not a professor of law," she declares.

Is her point that Obama is allergic to the use of military power or can't bear to fulfill his responsibility as head of the armed forces? That would come as a surprise to Iraqis, who have seen Obama stick to President Bush's timetable for withdrawal.

Palin accuses Obama of "reaching out to hostile regimes" and "apologizing for America," with pitiful results: nuclear tests in North Korea, repression in Iran. What she doesn't mention -- though, to be entirely fair, she may not know it -- is that the first North Korean nuclear test came in 2006 and that before Obama arrived, the mullahs in Tehran did not rule with a gentle, loving hand.

Her chief gripe, though, is that federal agents read the alleged Christmas bomber, Umar Farouk Abdulmutallab, his Miranda rights shortly after his arrest, at which point, she claims, he "lawyered up and invoked our U.S. constitutional right to remain silent."

Not for long, he didn't. The FBI says Abdulmutallab provided a wealth of useful information under questioning after he got a lawyer. For that matter, as FBI Director Robert Mueller and National Intelligence Director Dennis Blair said last week, he is still being interrogated.

But facts have never been Palin's strong suit. Nor do they matter, because what infuriates her is the mere idea that constitutional protections would apply to "a terrorist who hates our Constitution and tries to destroy our Constitution."

This is not some bizarre paradox. Lots of people who despise our Constitution -- Nazis, communists, Klansmen, Alaska secessionists -- enjoy its protections. Does she think the Bill of Rights should apply only to people who share her views?

That would not leave much of the document she and the tea partiers claim to revere.

Besides, Obama didn't invent the heretical notion of accepting limits on the government's latitude with jihadists. The Bush administration turned hundreds of terrorism cases over to the federal courts, without audible complaint from the right. The Supreme Court has ruled that the Constitution extends even to accused foreign terrorists held at Guantanamo.

The advantage of having a former law professor in the Oval Office is that he doesn't have to be tutored in such elementary realities. But Palin evinces a bitter resentment of any information that contradicts her blind faith in a benevolent, all-powerful security regime. She's more than willing to trade liberty for safety.

That went over conspicuously well in Nashville, where tea partiers cheered a leader who places excessive trust in government, disdains constitutional freedoms and promotes a cult of personality. So remind me: What is it they don't like about Barack Obama?