Gay Marriage Lost, But It's Not Losing 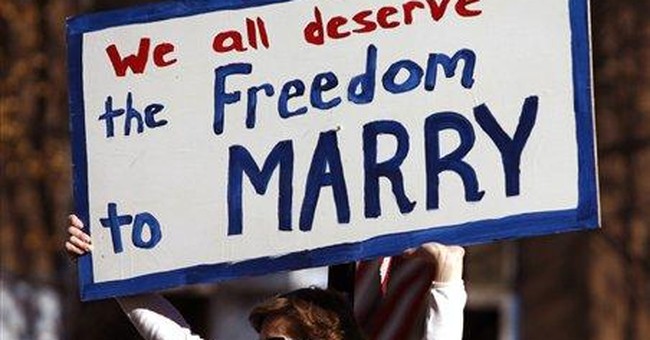 Opponents of same-sex marriage waxed triumphant recently when voters in Maine rejected a measure allowing gays to wed. Maggie Gallagher, head of the National Organization for Marriage, crowed, "This victory in Maine interrupts the cultural narrative that was being manufactured, that somehow American opinion is shifting on the gay marriage issue."

But she and her allies are the political equivalent of a Minnesota Vikings fan, gazing upon Brett Favre's middle-aged gridiron wizardry. They had better enjoy it now, because it's not going to last.

What got overlooked on Election Day was the victory for gay rights on the other coast, in Washington state -- where the electorate extended to homosexual couples all the privileges and responsibilities enjoyed by heterosexual couples. That measure, known as "everything but marriage," passed with 52 percent of the vote.

Why did it succeed while the initiative in Maine failed? Simple: Washington calls this new option "domestic partnership" rather than "marriage."

As it turns out, it's not the idea of treating gay couples equally that bothers most Americans. It's the name of the legal arrangement. Call same-sex marriage by another term -- civil union, domestic partnership, everything-but-marriage, Qualcomm Stadium, Death Cab for Cutie -- and they're fine with it.

Traditionalists take heart that same-sex marriage has lost every time it's been on the ballot, and that a decisive majority of the public rejects it. The latest poll by the Pew Research Center for the People and the Press finds 53 percent of Americans are against, with 39 percent in favor.

But anyone who denies that "American opinion is shifting" inhabits a fool's paradise, whose walls are sagging noticeably. Opposition to gay marriage is shrinking. In 1996, 65 percent took a negative view. Since then, support has fallen by about one percentage point a year. Put another way, one out of every eight Americans has gone from opposing the concept to endorsing it.

Time is on the side of gay marriage. The heaviest opposition comes from people over 65. Among those under 30, by contrast, supporters predominate -- and by a hefty 58-to-37 percent margin. Ask any actuary where this disparity will lead.

The opponents of same-sex matrimony are in ever-worsening straits. Civil unions and domestic partnerships, which provide some or most of the accouterments of marriage, have been provided to gay couples in nine states and the District of Columbia, according to Lambda Legal. Once radical, these are seen today as the sensible compromise between giving gays the right to sacred matrimony and giving them a sharp stick in the eye.

Offered a middle-of-the-road option between Perez Hilton and Pat Robertson, Americans have flocked to it. Eight years ago, Pew says, only 45 percent were in favor of civil unions. Today, it's 57 percent.

Washingtonians approved the most expansive version, and they knew exactly what they were doing. The ballot said, "This bill would expand the rights, responsibilities and obligations accorded state-registered same-sex and senior domestic partners to be equivalent to those of married spouses, except that a domestic partnership is not a marriage."

Why is it not a marriage? Not because it is legally different under Washington state law, but because … well, because it is not called marriage. But it's an identical twin.

The advantage of this bashful euphemism is that it accommodates gays on the most important issues related to family -- legal recognition and rights, protection for children, access to pension and insurance benefits -- while avoiding the weighty symbolism of calling this arrangement by a name that carries religious connotations.

In time, though, it will be apparent that granting same-sex couples substantive equality has none of the calamitous consequences imagined by gay-rights opponents. At that point, some of them will find themselves saying: Tell me again why we don't let them get married?

Many gay-rights advocates reject anything short of full access to marriage as a disgraceful revival of the old "separate but equal" policy -- which was anything but equal for African-Americans. But you don't get across a broad river in a single leap. You get there by building a bridge that allows you to travel across one step at a time.

As a destination, civil unions leave a lot to be desired. But as an avenue, they're hard to beat.

Liz Cheney Is Reportedly Looking for the Exit and It Cannot Come Soon Enough
Townhall
So TOUGH! Mask Nazi RUUUNS AWAY after his video-attempt to shame a maskless pregnant woman BACKFIRES on Twitter (but we grabbed it)
Twitchy
Donald Trump Crossed the Rapidan
Redstate
WATCH: Biden's Reading From Teleprompter During Speech Goes Horribly Wrong
PJ Media