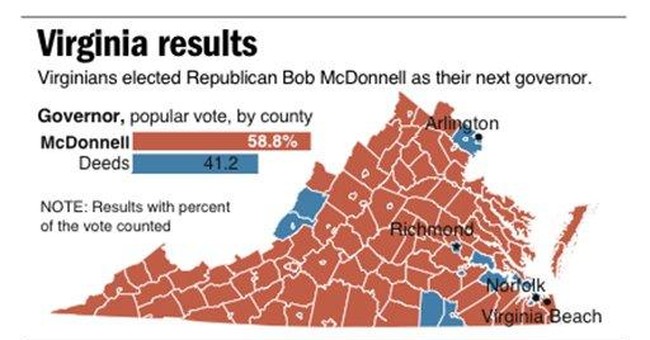 Barack Obama held out hope of overcoming partisan divides, lowering the temperature and bringing Americans together. How's that working out? Not well, it appears. One year after he was elected, Americans look more polarized than ever.

In a special House election in upstate New York, a Conservative Party candidate, backed by Sarah Palin, took on a moderate Republican whom his supporters called a "radical leftist," forced her to withdraw and then lost to the Democrat. It's entirely possible that in the Senate, not a single Republican will vote for an administration-supported health insurance overhaul.

Sen. Lindsey Graham, R-S.C., laments that "it makes news when Democrats and Republicans do something of substance together and that truly is a shame." From cable TV news channels, you get the impression of a country not so much politically divided as verging on civil war.

Here's a solution to that problem: Stop watching cable TV news channels and listening to politicians. Using them as a gauge of how divided we are is like using the National Hockey League to estimate the level of violence in America.

Most Americans aren't rabid liberals or fanatical conservatives. Gallup recently found that more people call themselves conservative than liberal or moderate. But other polls contradict it. According to a 2008 survey by the National Opinion Research Center, when you give them more options -- extremely liberal, liberal, slightly liberal, moderate, slightly conservative, conservative or extremely conservative -- you find that the largest ideological group is moderates, with 37.3 percent compared to 34.5 percent for the three conservative groups combined.

Add up the moderates and those who are only slightly liberal or slightly conservative and those who don't know -- those clustered in the middle of the road -- and you've got about two-thirds of the citizenry. As political scientists Morris Fiorina of Stanford's Hoover Institution and Samuel Abrams of Harvard put it, "the American electorate in 2008 is much better described as centrist than polarized."

Moreover, they note in a forthcoming paper, the public is not getting more polarized. "In terms of their ideological orientations," they note, "the American electorate looks about the same as it did when Democrat Jimmy Carter defeated Republican Jerry Ford in the not very polarized 1976 election" -- Carter being conservative by Democratic standards and Ford moderate by GOP standards of the day.

So why does everything feel so bitterly divided? One reason is that the elected officials of the two major parties have definitely gotten more ideologically uniform. A generation ago, we had liberal Republicans and conservative Democrats, two species that are nearly extinct. In 1965, half of House Republicans voted in favor of creating Medicare. No such mass crossover this time.

Among ordinary people who identify with one party or the other, however, there is far more diversity of views than among either party's leaders. Gun owners and evangelical Christians are supposed to be repelled by elitist liberal Democrats, but Fiorina and Abrams report that nearly 40 percent of gun owners voted for Obama, along with more than a quarter of white evangelical Protestants. Though Republicans are the anti-abortion party, one-third of Democrats are closer to the GOP position than to that of their own party.

Strictly ideological parties mean most people have little choice but to vote for ideologues. Faced with a liberal Democrat and a conservative Republican, write Abrams and Fiorina, voters "tend to vote for the candidate on their side of the spectrum, although they might well have preferred more moderate choices."

Another reason for the acidic climate is the rise of cable TV networks that thrive by taking ideological sides, day in and day out. Twenty years ago, they didn't exist. Today, watching Fox News, you get the impression that huge numbers of Americans regard Obama as a Stalinist. Switch on MSNBC, and you would assume that most people want Dick Cheney sent to Guantanamo.

You would be mistaken. Fox News averages just 2.6 million viewers on a typical weeknight, or less than 1 percent of Americans. MSNBC does even worse, with 831,000 per night. The three major network newscasts, which offer less overt bias, pull in a combined total of more than 20 million viewers each evening.

The average American citizen, contrary to myth, is neither very angry, nor very far to the left or the right, nor inclined to treat anyone with different opinions as a mortal enemy. In a cluttered media environment, the most extreme voices tend to attract so much attention that it's easy to forget something important: Most people aren't listening.