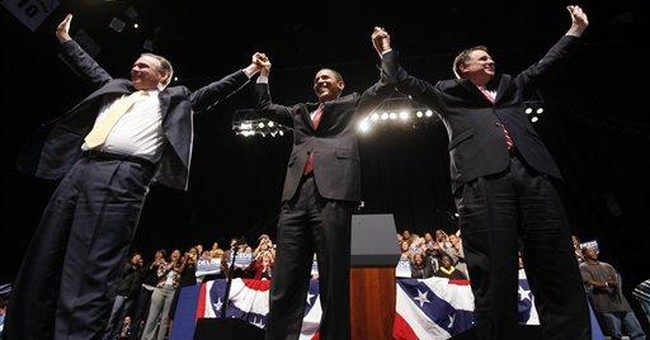 I have seen the future of American politics, and it is big. Big and fat.

You can get a glimpse of it in the New Jersey governor's race, which pits the slim, distance-running, Democratic incumbent Jon Corzine against Republican Chris Christie, who is built for comfort, not for speed. Corzine ran a TV ad accusing the challenger of "throwing his weight around" to beat traffic tickets, accompanied by footage that did not attempt to conceal Christie's bulk.

"Mr. Corzine's campaign is calling attention to his rival's corpulence in increasingly overt ways," reported The New York Times a few weeks ago, noting that his "television commercials and Web videos feature unattractive images of Mr. Christie, sometimes shot from the side or backside, highlighting his heft, jowls and double chin." Meanwhile, Corzine has also made a point of taking part in 5- and 10-kilometer races every chance he gets.

For a while, Christie dealt with the insults in the classic manner of the overweight, gamely swallowing his embarrassment. "It's just part of who I am, unfortunately," he told The Times, while declining to state his current weight.

But the other day, he decided to confront his opponent. No, not by calling him bald, furry-faced and four-eyed, all of which would be understandable retorts. No, he took the high road by daring Corzine to stop the sly digs and say what he's thinking outright. "If you're going to do it," said Christie, "at least man up and say I'm fat."

By then, though, it had dawned on Corzine that ridiculing excess heft is about as shrewd as naming Andre Agassi as your drug adviser. In an interview on CNN, the governor tried to contain any backlash by conceding that it might have been wise not to call attention to his opponent's bulk.

It may have also been shortsighted for Corzine to invite voters to ponder traffic violations, considering that he suffered severe injuries in a 2007 highway crash in his chauffeur-driven SUV, which had been clocked at 91 mph. Oh, and he wasn't wearing a seat belt.

But the really plus-sized mistake was undertaking to alienate the hordes of voters who are carrying extra pounds. Nationally, two out of every three adults are overweight or obese, and while New Jersey does a little better than average, that is not saying much. More New Jerseyans look like Christie than look like Corzine, and they probably don't like being ridiculed by proxy.

Politicians in or seeking major offices, of course, tend to be reasonably trim. We haven't had a barrel-shaped president since William Howard Taft, who weighed over 300 pounds. But a generous silhouette was never the presidential ideal. When one White House visitor met 260-lb. Grover Cleveland, the man blurted, "Well, you're a whopper!"

With more and more voters afflicted with weight problems, though, the political environment will probably become more accommodating to large candidates. Our standards of what is acceptable are changing. During last year's campaign, some voters even reacted to Barack Obama's lean physique by raising the question Walter Mondale asked about Gary Hart in the 1984 Democratic presidential race: "Where's the beef?"

The Sunday Times of London found it telling that after publicly declining a slice of cake, Obama lost the Pennsylvania primary. New York Times columnist Maureen Dowd carped that he could lose votes for being "too prissy about food." Christie is immune to such political hazards.

In the old days, low-fat individuals could flatter themselves that they deserved credit for being that way. But it's now clear that obesity owes a lot to biology and environment. Some people are genetically prone to excess weight, and some are not.

Lots of heavy folks work very hard to lose weight, without success, or else lose it only to gain it back. Their bodies, hard-wired for famine survival, don't want to be skinny. Some people are thin because they eat sparsely and exercise fanatically, but most are just lucky. So New Jersey voters are probably not going to take Corzine's figure as a symptom of virtue.

In the future, given the changing shape of the electorate, a little extra flesh could be a political asset, if not a necessity. But regardless of who wins, I'm willing to bet this will be the last time a politician is rash enough to mock an opponent's weight. When Corzine raised that issue, he bit off more than he could chew.