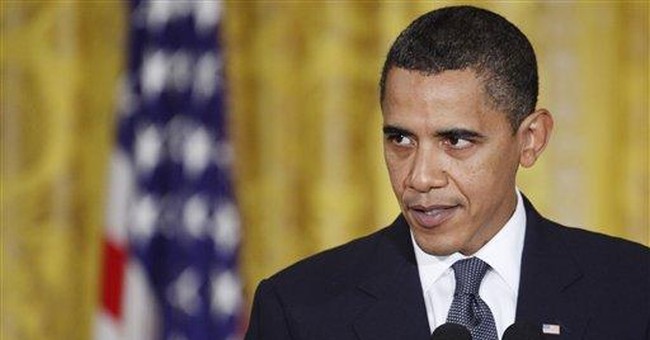 Obese people and public-health scolds have one thing in common: a compulsion to keep behaving in a way that does not produce helpful results. The obese tend to keep eating too much and exercising too little regardless of what others say. Disciples of maternal government persist in meddling in individual choices whether it works or not.

One of the pet campaigns of the second group, ostensibly on behalf of the first one, is forcing restaurants to provide accessible nutritional information about their offerings. In 2008, the city of New York passed a law mandating calorie data on fast-foot menus and menu boards, on the assumption that better knowledge would make for healthier eating.

"Presenting nutrition information on restaurant menus empowers consumers and influences food choices," the Department of Health and Mental Hygiene promised. Let people know that a McDonald's Angus Deluxe is larded with enough calories to sustain a family of four for a month, the thinking went, and they'll gravitate to something more slimming.

But the early evidence suggests that people don't choose high-calorie fast foods because they don't know any better. They choose them because they like them, and they don't really care if others disapprove.

That's the implication of a new study in the journal Health Affairs conducted by researchers at New York University and Yale University. They asked questions of and collected receipts from customers at McDonald's, Burger King, Wendy's and KFC outlets in the city before and after the law took effect, and did the same in Newark, N.J., which has no such law.

The impact of the ordinance didn't quite fulfill those fond expectations. To start with, only about half of the fast-food customers in New York said they noticed all this helpful information, and only a quarter of the patrons in this group said it made any difference in their choices.

Even those who said the data affected their decisions were fooling themselves. Before the law was implemented, the average customer in New York bought items containing 825 calories. Afterward, the figure was 846. In Newark, during the same time period, the typical patron went from 823 calories to 826.

In neither place did diners cut back on saturated fat, sodium or sugar. The labeling law was the moral equivalent of the Chicago Olympics bid -- lots of hype to little effect.

How to explain this outcome? "New York City health officials said that because the study was conducted immediately after the law took effect, it might not have captured changes in people's behavior that have taken hold more gradually," reported The New York Times.

Nice try. The authors of the study considered that possibility and gave it little credence. "Consumers in our sample reported frequenting fast-food restaurants approximately five times per week," they noted, "which indicates that they likely had repeated experiences with calorie labels before our follow-up data collection."

Moreover, said the report, "It is not clear whether continued extensive exposure beyond a month would have made consumers more or less likely to respond to labels." Maybe the information would sink in over time. Or maybe customers who noticed at first would soon tune it out.

But it's not hard to find likely reasons for the failure of this approach. One is that the sort of people who make a habit of eating at Burger King generally don't put a high priority on a sound diet. Giving them nutritional information is a bit like recruiting for Greenpeace at a rifle range -- a doomed enterprise. The people who are most likely to act on fast-food nutritional information are the ones least likely to encounter it, because they're packing a lunch or eating at home.

Rebecca Krukowski, an assistant professor at the University of Arkansas for Medical Sciences, says another factor may be at work -- what might be called the coals-to-Newcastle problem. "Oftentimes, when people are interested, they already have the information," she told me. "Maybe they've already been through a weight-control program and become well-educated about nutrition and have become pretty good at estimating calories."

So the menu labels tell them little they didn't already know. Meanwhile, it seems, the people who lack the needed information generally prefer to ignore it when it's foisted on them.

Architects of intrusive policies, like those at the New York health department, may wonder how on earth someone could be given valuable information and not use it to make better decisions. But we could ask the same thing about them.