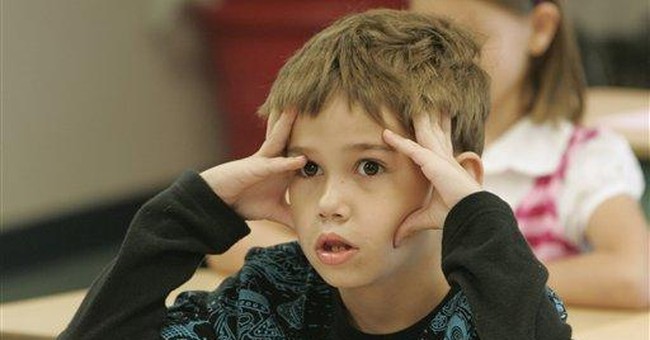 On Tuesday, as children in many places went back to school, the world's most prominent black leader undertook to expand a worshipful cult of personality as part of a systematic effort to achieve absolute power. You may have heard about it: Oprah Winfrey kicked off her 24th season on the air by taking over Chicago's Michigan Avenue for a live show in front of thousands of adoring fans.

Oh, there was also that business involving the president of the United States going on TV to urge students to work hard and stay in school. In the end, Barack Obama's televised speech didn't quite evoke the sight of Red Guards cheering Mao Zedong in Tiananmen Square. But the more inflamed reactions from the right do not excuse his presumption in commandeering the nation's classrooms for purposes that are beyond his rightful duties.

No, I don't mean an effort to "indoctrinate America's children to his socialist agenda," as the head of the Florida Republican Party fantasized. If Obama had a socialist agenda, he'd first have to indoctrinate his own economists, who are committed believers in capitalism. The president is certainly a liberal who favors more government control of our economic system, but not a radical who wants to remake it from the bottom.

His offense was to use his office to impose on a captive audience of youngsters in an appearance that inevitably carries the odor of politics. No one objects when he speaks to the nation or Congress on TV, because we can ignore him or jeer him as we choose. But some parents who distrust him feel aggrieved that he can force his message on defenseless children.

Who can blame them? Whether you welcome Obama's speech depends largely on your opinion of him. Had George W. Bush done this, you can bet that parents in Boston and San Francisco would have pulled their kids out rather than expose them to a dangerous, power-mad warmonger. Being no fan of Bush's, I would have sympathized with them.

For the record, Democrats did complain strenuously when President George H.W. Bush gave a televised speech to schoolchildren in 1991, with House Majority Leader Richard Gephardt denouncing the spectacle as "paid political advertising for the president."

The parents this time had equally legitimate grounds to complain. When they submit to the requirement of compulsory schooling, they do it because they recognize the need for their kids to be educated. But even in the president's absence, many parents harbor reservations about some of the influences that go with government-run institutions.

That's one reason 5 million children are enrolled in private or parochial alternatives. It also helps explain why parents of another 1.5 million -- 1 in 34 kids -- have taken the drastic step of doing the teaching themselves.

Even if Obama had made an exceptional effort not to raise hackles, he would have raised hackles among some Americans. But he didn't make quite the effort he should have.

What particularly provoked suspicion was the Education Department's lesson plan, which recommended that students compose "letters to themselves about what they can do to help the president. These would be collected and redistributed at an appropriate later date by the teacher to make students accountable to their goals." Again: Imagine the liberal uproar had George W. Bush's administration tried that.

By the day of the speech, the administration had retracted the suggestion. But amid Obama's wholesome exhortations was a boast that he is "working hard to fix up your classrooms and get you the books, equipment and computers you need to learn."

David Boaz, executive vice president of the libertarian Cato Institute in Washington, told me, "That suggests that education is the responsibility of the federal government and the personal responsibility of the president," something some Americans don't buy. Not only that, says Boaz, but it conveys the message that "I, Barack Obama, am fighting for you and fighting against someone" -- an implicit rebuke of his political opponents, many of whom think the emphasis on physical resources misstates the nature of our educational failures.

Maybe his other messages were valuable enough to overshadow that one. But the students who heard Obama's speech are not the only ones who could learn some useful lessons from it.