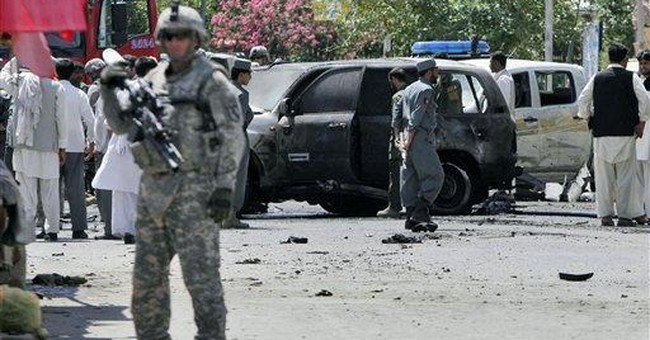 On Oct. 7, 2001, the United States launched one of the most stunningly successful military operations in its history. Just four weeks after terrorists directed from Afghanistan killed nearly 3,000 people on American soil, we struck al-Qaida and Taliban government targets with aircraft, missiles and Special Forces soldiers. By early December, the Taliban was out of power, al-Qaida had fled into the mountains and victory was ours.

But that was eight years ago. Did anyone expect back then that we would still be in Afghanistan today, with more troops than ever? The war we thought we had won is not only dragging on but getting worse.

Already, 2009 has been the deadliest year of the war for American forces, and August was the deadliest month yet. Concludes Anthony Cordesman, an expert at the Center for Strategic and International Studies in Washington, "The U.S. is now losing the war against the Taliban."

Beyond toppling the Taliban regime, it's hard to see what we have accomplished. Despite the presence of more than 100,000 Western troops and foreign assistance totaling $32 billion since 2001, The Economist magazine says nearly two-thirds of the country "is considered too dangerous for aid agencies to reach."

In much of the country, the central government that we have done so much to bolster is about as relevant as the Confederate Air Force. When RAND Corp. scholar Seth Jones traveled in the country last year, he found "some villagers had never heard of President Hamid Karzai, who has led the country since 2001."

This week, U.S. and NATO commander Gen. Stanley McChrystal submitted a report to Defense Secretary Robert Gates asserting that "success is achievable" with "a revised implementation strategy." He is expected to request even more troops -- even though the number of American military personnel has doubled in the past year, to more than 60,000.

How many more troops? The Washington Post reports that a senior military officer said recently that the U.S. would need a force of 100,000 to carry out a new strategy. That may not be easy to get from the Obama administration, since a majority of Americans now oppose a war that once had near-universal support.

Nor is 100,000 troops necessarily enough. The surge strategy in Iraq required 160,000 U.S. military personnel -- in a country with fewer people and a third less land area than Afghanistan.

By now it's clear that eliminating the Taliban, creating a stable central government and putting the country on the road to economic development is a project that will take many years, if it can be done at all. A report from the Washington-based Center for American Progress calling for a renewed U.S. commitment says withdrawal might be possible -- a decade from now. So President Obama will have to decide if he plans to find a way to escape this bottomless bog or leave the decision to whoever is president in 2019.

The U.S. has remained in Afghanistan this long on the assumption that it was a war we had to win: Pull out and we would soon be back where we were on Sept. 10, 2001, with the Taliban in control and al-Qaida enjoying a refuge from which to launch attacks. But our safety does not require us to stay there to engage in the costly and open-ended projects known as nation-building, or even to defeat the extremists.

Before the attacks on New York and Washington, the U.S. government was averse to going after our enemies in Afghanistan. But no jihadist in the most remote reaches of Helmand province could possibly expect a repetition of that forbearance. Even if the Taliban were to regain power, they and al-Qaida would know that any attempt to strike American targets would assure another cataclysmic response.

Today's "safe haven" for terrorists actually lies in Pakistan, which the U.S. has not seen the need to invade. The threat to Pakistan from Islamic extremists is commonly offered as another rationale for our presence in Afghanistan. But as the war has continued, Pakistan has grown less stable and more vulnerable, suggesting that our efforts are either ineffectual or counterproductive.

The same could be said of our entire mission. The Soviets went into Afghanistan in 1979 in the mistaken belief that the invasion would enhance their security. Nine years later, they admitted failure and went home. Staying longer than they did doesn't mean we will be more successful.