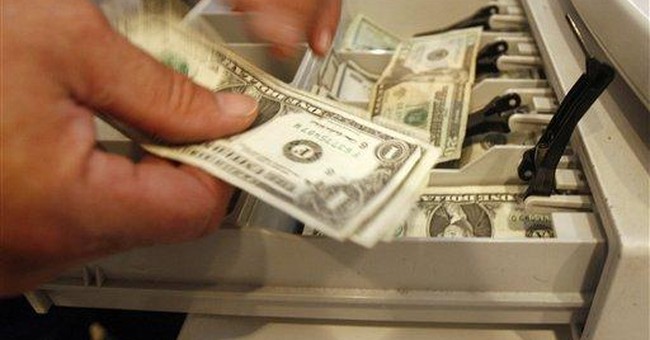 Former Texas Sen. Phil Gramm got in trouble when he said Americans are mired not in an economic contraction, but a "mental recession." He soon had to step down as co-chairman of John McCain's campaign for committing the ultimate political sin: telling the truth about a misperception that happens to be very popular. In politics, after all, it doesn't matter who's right -- it only matters who has the most votes.

Americans feel as though the economy is in a recession and want the government to do something about it. In reality, it is expanding. In the second quarter, it grew at a respectable inflation-adjusted rate of 1.9 percent, double the pace of the first quarter. Unemployment was up, but it's still a pretty mild 5.7 percent.

The recession cures being bandied about by the presidential candidates and others miss the real source of our current pain and what can be done about it -- which is not much.

"There's a great misunderstanding of what's happened," says economist Allan Meltzer. The main trouble, in his view, is not that Americans are suffering from weak or negative economic growth. It's that they have suffered a loss of wealth, a very different ailment.

Meltzer, a professor at Carnegie Mellon University and a scholar at the American Enterprise Institute, explains that the loss stems from two major factors. The first is high oil prices, which are the equivalent of a huge tax increase. The second is the housing bust, which has vaporized more than a trillion dollars worth of assets.

What does all this mean? Our standard of living has declined. Or to put it bluntly, as Meltzer does, "We're poorer than we were, and it's unpleasant, but it's a fact." We can no longer afford all the things we used to, because so much of our income is now going to pay for gasoline.

In the past, we might have cashed in our rising home equity to keep consuming at the same rate as before, but you can't do that when your home equity is shrinking. Plus, we are under pressure to save more, since we can't count on real estate profits to finance a comfortable retirement.

When the economy contracts, the government may use sound monetary and fiscal policy to help revive growth. But when wealth goes up in smoke, the government can't necessarily bring it back. If it tries, the effect is likely to resemble what happens when you give a recovering alcoholic a drink: deceptively pleasant at first, but ultimately calamitous.

In the 1970s, the Federal Reserve reacted to soaring oil prices by creating more money and spreading it around. When you have more money, it doesn't hurt so much to fill your tank. But when everyone suddenly finds themselves with more money, the consequence is inflation. In the 1970s, instead of seeing just the price of gas climb, we saw the price of everything climb.

Today's Fed faces the same temptation. It could ease today's discomfort by rapidly expanding the money supply, and some experts (including Meltzer) think it has already made that mistake. This course is particularly tempting because it could also keep home prices from falling further.

But the remedy is illusory. Homes are not worth what they used to be, and for the Fed to attempt to disguise the fact would create even more uncertainty in a turbulent market. That, in turn, would merely postpone the day when prices hit the inevitable bottom.

When you have a loss of wealth, the best way to cope is to accept it and adapt to a lower standard of living, sooner rather than later. Sending out rebates, eliminating gas taxes, bailing out homeowners and accelerating monetary growth, among the proposed remedies, do exactly the opposite. They spare us the obligation of dealing with reality by making us feel richer so we can keep on as we were before.

But they don't change the stark fact that we are poorer now and will remain that way for some time. And they ultimately backfire by wasting money, igniting inflation or both.

In the long run, we will adapt to the new realities, the economic impact will moderate, and the pain will fade. Till then, our least destructive option is to do something no politician would dare suggest: Suck it up.