Stephen Moore
|
Posted: May 24, 2022 12:01 AM
Share   Tweet
The opinions expressed by columnists are their own and do not necessarily represent the views of Townhall.com. 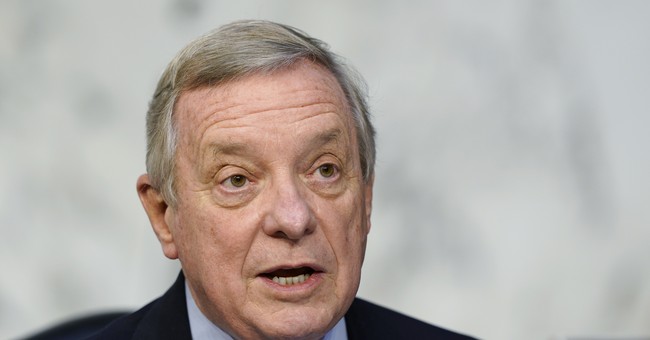 In this administration, it's always someone else's fault. Inflation is now the No. 1 concern of voters, so the White House first blamed COVID. Then Donald Trump's tax cuts. Then Vladimir Putin. Then meatpackers and the poultry industry, Big Oil and pharmaceutical companies.

Now, Democrats have identified a new inflation scapegoat: plastic. Visa, Mastercard, American Express and other credit cards hidden away in your wallet.

Sen. Dick Durbin (D-Illinois) has had it out for credit cards for almost two decades, even though over that period, credit cards, which were once reserved for the rich, are now nearly ubiquitous in our society. Many stores don't even take cash anymore in the post-COVID world. The benefits and conveniences of paying with a plastic card are easily in the tens of billions of dollars to retailers and shoppers. Stores benefit because shoppers don't have to have cash on hand to make purchases. They also benefit from not having to deal with the exchange of cash, which can lead to theft by unscrupulous employees at the register.

Credit cards are convenient for consumers because we don't have to walk around with hundreds of dollars in our wallets.

But Democrats allege that the interchange fee that credit card companies charge retailers and merchants for their service on transactions is excessive. This interchange fee typically ranges between about 1% to 3% of the retail price of the transaction. If retailers don't want to pay the cost because they think it is exorbitant, they don't have to accept cards and can take cash only. Few retailers don't take plastic every day to avoid paying the fees. It's a free country. But the vast majority of retailers see the benefits far exceeding the costs.

Durbin, a member of the Senate Judiciary Committee, doesn't see it that way. Instead, he blames Visa, Mastercard and Discover for making food and gas more expensive. At a recent hearing, Durbin fumed: "Today, we're going to talk about a hidden fee that fuels the fires of inflation across America every day. What they may not know is this swipe fee is contributing to the problem of inflation."

But for this to be true, interchange fees would have to be higher than before Joe Biden became president and before inflation surged to 8.5%.

But the fees aren't rising. Industry sources report that over recent years, the average merchant fee (for debit, credit and prepaid cards) has fallen slightly.

By the way, merchants and retailers get concrete benefits in exchange for the fees they pay to accept credit cards. Those fees cover the cost of security and fraud protection, infrastructure improvements and consumer benefits programs such as cash back and rewards.

What Durbin and the Democrats want is government price controls on credit card companies. They say there isn't enough competition, but there are at least five major credit cards the public can buy. There is plenty of competition in the industry. Nor is there any evidence that cutting the fees to the retailers will lead to lower prices paid by consumers at the gas pump or the grocery store checkout line.

Today, about 70% of retail transactions take place with credit cards in part because nearly everyone, except those with terrible credit histories, has a credit card these days. Projections say in the next decade, more than 80% of payments will be made with plastic as we move inevitably to digital transactions and a cashless society.

The significant impact of Durbin's price controls will not be to tame inflation but to restrict who can get access to credit cards. In other words, the poor will get hurt the most. Isn't that turning out to be the case with nearly every liberal policy these days?