Stephen Moore
|
Posted: Oct 02, 2018 12:01 AM
Share   Tweet
The opinions expressed by columnists are their own and do not necessarily represent the views of Townhall.com. 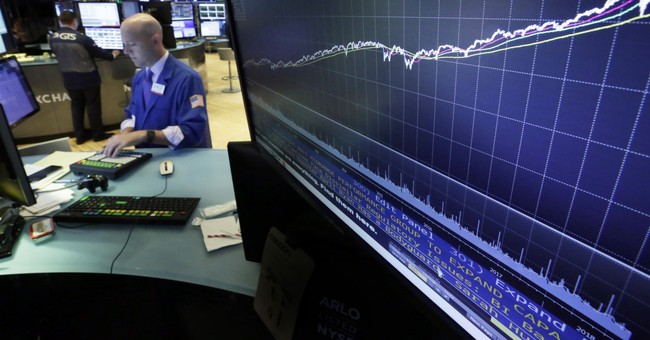 I have spent some three decades railing against faulty budgetary scoring of tax bills, but the latest charade from the Congressional Budget Office and Joint Tax Committee takes the cake. The story of fiscal phony math is so indefensible when it comes to the Trump tax cut that you may not believe it could be true. Alas, it is.

The story starts with the CBO forecast in 2017 that over the next decade the national debt will double to 150 percent of GDP in about 20 years. Those are debt numbers that don't have a happy ending – just ask the citizens of Puerto Rico, Detroit and Greece.

This pessimistic forecast was based on a CBO prediction before President Barack Obama left office that economic growth would average over 20 years between 1.7 percent and 1.8 percent. Growth that low doesn't come close to generating the tax revenues to keep pace with shoot-the-moon federal spending trends.

But President Donald Trump's economic program was always predicated on getting pedal-to-the-metal growth of 3 percent to 4 percent each year. (Trump actually wanted 5 percent growth, but even Larry Kudlow and I thought that was too high to aim for. We might have been too unambitious.)

Economist Larry Summers of the Clinton and Obama administrations and many others on the left assured America that 2 percent was the best we could possibly achieve because America was suffering from a slow-growth paralysis he called "secular stagnation." They believed that since Obama averaged less than 2 percent growth over eight years (and 1.6 percent in his last year in office), it would be inconceivable for a blowhard like Trump to get us to anywhere near 3 percent.

But growth has rocketed to above 4 percent over the last two quarters and it's a brand-new ball game. Just since the tax cut passed some nine months ago, the CBO has increased its estimate of economic output by a gargantuan $6.1 trillion over the 10-year window of 2018 to 2027.

Now here's where things start to get interesting. More growth means more revenue to the government, which means lower deficits in the future, right? Not according to the CBO. It actually now says the Trump tax cut, which was originally estimated to cost $1.5 trillion by the Joint Tax Committee, is this year suddenly inflated to about $1.9 trillion.

Here is how Politico explained the $400 billion rise in the deficits caused by the tax bill:

"CBO found the economy was stronger last year than previously estimated, and that puts a higher price tag on the tax cuts because more people would otherwise be paying higher rates this year. On top of that, CBO now believes top earners will get less of the income pie in the coming years, which means less revenue coming into the government."

This is the most convoluted logic in modern times. Thanks to the tax cut and other Trump policies, growth is $6 trillion higher. And yet because tax rates are lower, CBO says the feds will get less of that extra money in revenues.

CBO is genetically incapable of giving Trump the credit for the booming economy. In fact, he's penalized for it. Any sane person would say the deficit is going to be somewhere near $1 trillion smaller as the economy booms. Not $400 billion larger.

Even more remarkable is that CBO says the rich will get a smaller share of the economic pie over the next decade. Wait a minute. I thought the Democrats said this was a tax cut for millionaires and billionaires. Guess not.

Incidentally, this exact forecasting error happened in the Obama years – except in reverse. Because the growth rate was much lower under Obama than expected, the GDP was $2 trillion lower over Obama's two terms. It turns out the "stimulus" package failed to stimulate.

Trump's tax cut is only 9 months old so it is too early to say it is paying for itself. But already well over half the projected cost has evaporated because of higher growth. If we stay on this 3 to 4 percent path for another couple of years, the flood of added revenues will mean smaller deficits and much smaller debt levels relative to GDP.

What makes this all the more remarkable is that most Democrats are running for Congress this year promising to repeal or rollback the Trump tax cut, even though it has helped get us to 4 percent growth in a mere 18 months. They are sticking to their script that the tax cut will not work even though we can all see that it is working.

I told you that you wouldn't believe this.