Stephen Moore
|
Posted: Feb 09, 2016 12:01 AM
Share   Tweet
The opinions expressed by columnists are their own and do not necessarily represent the views of Townhall.com. 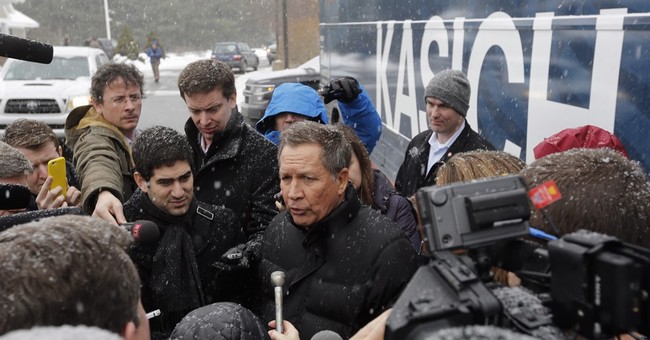 The Iowa caucuses may have only muddied the waters in the race for the White House, but they did almost definitively decide one thing: The next president will not be a governor. That's an amazing revelation because, just one year ago, the smart money was betting that the next president would be a Republican governor.

The governors were supposed to be the GOP's talent pool.

If the nominee wasn't going to be Jeb Bush, the former two-term Florida CEO with a sterling job performance, voters would surely look to Wisconsin's Scott Walker, the conservative warrior for financial sanity and labor reform, or the policy wizard Bobby Jindal of Louisiana.

If none of these candidates panned out, a second tier of popular and talented governors, Ohio's John Kasich, Texas' Rick Perry and New Jersey's Chris Christie, stood at the ready -- as did former Arkansas Gov. Mike Huckabee. Perry had an amazing story to tell: While he was governor, 2007-2013, the Lone Star State created more jobs than all the other 49 states combined. Of the governors, he was the only Republican or Democratic candidate who served in the military. What was not to like?

But like the snow in Washington from last month's blizzard, Perry and the rest of the state CEOs have melted away.

The remaining wannabes, Bush, Kasich and Christie, combined collected about as many votes in Iowa as retired surgeon Ben Carson -- who finished in fourth place. They were non-entities, even though Bush spent millions in the Hawkeye State. These three are the walking dead of the race and are all pinning their hopes on a top-three performance in New Hampshire. Only Kasich appeared to have a shot.

What happened? In a year when politicians are despised, their experience became a liability. Even their successes were dismissed. The more Kasich boasted of how he balanced budgets in the 1990s in Congress and for five years as governor, the more conservatives concluded: He's been around too long. Talent wasn't in high demand. Fresh blood was.

I don't have a horse in this race (though I helped Sen. Rand Paul with his tax and economic program). But the demise of the governors should be deeply disappointing to conservatives, because these executives have actually walked the walk. They have cut taxes. They have balanced budgets. They have taken on unions and reformed welfare. When and why did conservatives stop believing that actions speak louder than words?

Let's be honest: Jeb Bush was easily the most qualified for the Oval Office, having masterfully run the third-most-populous state. I wince when voters whine that he isn't conservative enough. A governor who cut taxes five times, who instituted the most advanced school-choice program in the country, who oversaw an enormous growth spurt in Florida, who is a fearless free-trader, who fought for the right to life unfailingly isn't conservative enough?

Granted, these governors ran lousy campaigns and sounded tone-deaf to voter rage. Jeb was his own worst enemy; he was obsessed with raising $100 million, while failing to reintroduce himself to voters and assure them that we weren't going to get a fourth Bush term.

Kasich seemed to go out of his way to irritate conservatives by grabbing the carrot of Medicaid dollars from Obamacare and rationalizing the money grab by saying Jesus made him do it. Jindal was too wonky. Walker came across as not ready for prime-time. Huckabee was too preachy. Perry never had a chance because he was a governor from Texas -- and we just did that.

Still, governing effectively isn't a sin; it's a skill. The art of politics is figuring out when to reach across the aisle, get 70 percent of what you want and find ways to bring the other team along. Reagan was a steadfast conservative with unshakable convictions, but he made deals -- and mostly good ones -- for the country and the cause of freedom.

I have mostly admiration for the three men left standing: Donald Trump, Ted Cruz and Marco Rubio. But it's slightly disconcerting that none has ever governed. Warning: Obama tried to learn on the job, and it was a giant fiasco. One of these three survivors is likely to be the next president. Once he wins the nomination, here's hoping that he taps a governor as his running mate. There are plenty of stars to choose from. The talent pool runs deep.