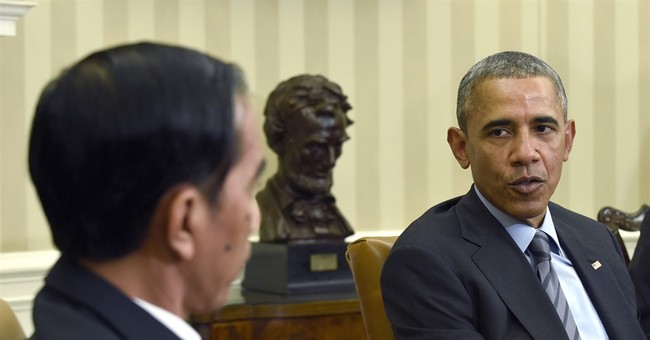 Now that Hillary Clinton has, by default, sewn up the Democratic nomination, expect Democrats to play the gender card for all its worth. In August, Clinton lashed out at the GOP field: "extreme views on women, we expect from some of the terrorist groups ... but it's a little hard to take from Republicans who want to be the president of the United States."

So much for cleaning up the harsh partisan discourse in Washington.

Clinton's "gender equity" agenda includes family-leave legislation and a federal mandate requiring that women receive equal pay. This from a senator, from 2002-2008, who paid her female staffers 72 cents for every dollar paid to males, or $15,708 less than the median salary for a man, according to an analysis of data from official Senate expenditure reports.

The strategy here is to try to continue to exploit the gender gap that widened in the past two presidential elections. In 2012, Barack Obama won 57 percent of the women's vote. Obama has done especially well with single women, winning 66 percent in 2012.

But it may not work this time around, and here's why. Working women have gotten crushed under the weight of Obama policies. During Barack Obama's six-and-a-half years in office, women have suffered steeper declines in take-home pay than men have. Women have also experienced sharper declines in employment and a faster rise in poverty. The financial squeeze has been especially severe for single women.

Last month, the Census Bureau reported on income and poverty through 2014. It's not a pretty picture. The median-income household has lost nearly $1,300 in income after inflation under Obamanomics.

It's worse for women. Since President Obama took office in 2009, median inflation-adjusted income for women has fallen by nearly 4 cents on the dollar, according to Census data, versus slight gains for men.

On Obama's watch, an additional 2 million women have slipped into poverty. Wait a minute -- this is supposed to be an economic recovery. The poverty rate among women is now 16.1 percent -- the highest level in 20 years.

The Great Recession was the main factor that plunged families into poverty but, six years later, poverty rates have failed to return to normal levels. The poverty rate among single mothers of children under age 18 (39.8 percent) is nearly double that of single fathers (22 percent), and that gap has widened under Obama's reign.

It's well-known that labor force participation has fallen to its lowest level since 1978. What's lesser known is that the biggest decline in employment has been among women. The labor-force participation rate for females is now 56.4 percent, the lowest in more than 25 years.

In the 1980s and '90s, millions of women voluntarily entered the labor force and earned rising incomes. Over the past decade, that progress has stalled out. An all-time high of 57 million women over the age of 16 are out of the labor force today and not collecting a paycheck. All those Obama stimulus programs and more than $7 trillion of red ink added to the national debt haven't put women back to work.

Liberals counter that the gap between women's wages and men's wages has narrowed in the past five years. But the major explanation for this is that so many fewer women are in jobs now. Women who fall out of the workforce tend to be at the lower end of the income scale -- so perversely, the gender gap appears to have fallen. This statistical illusion hides the reality that, for millions of women not able to find work under the Obama recovery, their earnings have fallen to zero.

There are a multitude of unforced policy errors that explain why the U.S. economy has pummeled workers. Obama has hobbled the economy with punitive tax rates, $7 trillion in new debt, minimum-wage hikes, regulatory overreach and Obamacare. Women have been the front-line victims of these failed policies.

What should give all of us pause -- and especially women -- is that if you listen closely to the policy ideas of Hillary Clinton and other Democrats, they sound very much like they are promising four more years of all this. That really would be a war against women!