Star Parker
|
Posted: Jul 10, 2019 12:00 AM
Share   Tweet
The opinions expressed by columnists are their own and do not necessarily represent the views of Townhall.com. 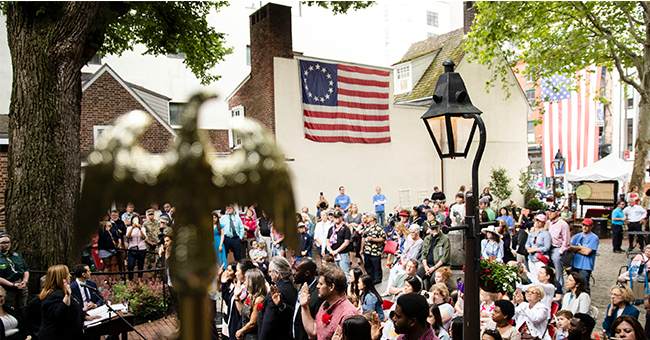 A new Gallup poll shines a spotlight on the deep political divide in America and surely points to what the upcoming presidential election will be about.

Gallup asked, "How proud are you to be an American?"

This tells us something about Nike's recent move to pull its Betsy Ross flag sneakers from the marketplace, having taken guidance from its ex-football star anti-hero, now-Nike corporate spokesman, Colin Kaepernick. Kaepernick claims that America's first flag is associated with the era of slavery.

Analysts say, according to the Wall Street Journal, that Nike's "core customer base ... starts with American males in their early teens." And, "80% of the sneaker industry's most committed enthusiasts are under the age of 35."

Estimates are that Kaepernick's net worth is $20 million, and his Nike deal will add millions of dollars a year. At age 31, it seems that Kaepernick is not doing badly in the USA.

Does this mean he shouldn't speak out if he sees things that are wrong? Of course not. The issue is spin.

Is Kaepernick -- and Nike -- delivering a message to young men, particularly young black men, that will make their lives better?

Is a football star worth tens of millions helping our youth by telling them that they live in a nation that is inherently racist?

The operative question is whether it's true.

One of today's headlines is immigration. There are millions who want to come here. There is no country in the world where more aspire to be than the USA. Yet only 24% of those 18 to 29 who were born here feel "extremely proud" of their country? What gives?

America has a painful history on race.

But America is comprised of many individual Americans, and in a free country, everyone cannot be painted with the same brush.

Betsy Ross, the seamstress who made America's first flag, was born into a family of Quakers and was educated in Quaker schools. The Quakers were the first group in America to formally protest slavery and the slave trade.

In 1775, they were leaders in forming the Pennsylvania Abolition Society.

On Feb. 12, 1790, a petition arrived to the very first session of the U.S House of Representatives from the Pennsylvania Abolition Society urging measures "for promoting the abolition of slavery and ... discouraging every species of traffick in the persons of our fellow men."

The petition argued that slavery and the slave trade were incompatible with the values that drove the American Revolution.

The petition arrived under the signature of Benjamin Franklin, a signatory of both the Declaration of Independence and the U.S. Constitution.

The floor debate that followed was the first public debate in Congress on slavery.

The American flag made by Betsy Ross, and the one we have today, stand for this struggle and for the principles articulated in the Declaration of Independence that Benjamin Franklin signed.

The truth and power of those principles of freedom is what made us and makes us great, despite the presence of evil.

Let's not make the grave error of thinking that what needs to be eliminated are the principles rather than the evil.

Technology and the internet give us unprecedented power to seek truth. America's youth should be using these tools to look for it, to use their own power to think for themselves, not be seduced by the distortions of confused demagogues.

Star Parker is a author and president of CURE, Center for Urban Renewal and Education. Contact her at www.urbancure.org.