Trump Gets Real About the UN

Star Parker
|
Posted: Dec 27, 2017 12:01 AM
Share   Tweet
The opinions expressed by columnists are their own and do not necessarily represent the views of Townhall.com. 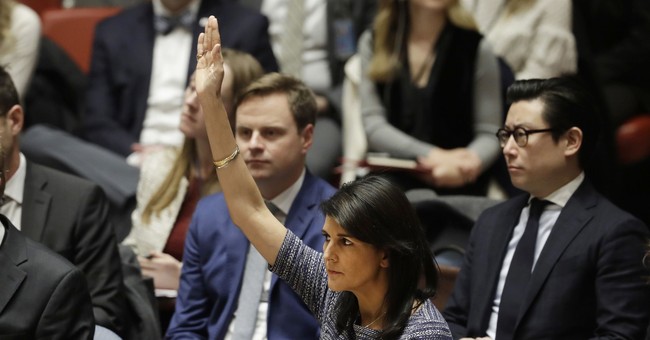 Following the U.N. General Assembly vote condemning the United States' recognition of Jerusalem as the capital of Israel, and Ambassador Nikki Haley's bold speech to that body following the vote, Haley has announced that the 2018 budget for the U.N. will be cut by $285 million.

According to the Council on Foreign Relations, the United States contributed $10 billion to the U.N. in 2016, about 25 percent of its total budget.

So $285 million is not a game-changing sum. But this is a significant step to put the U.N. -- and the world -- on notice that President Donald Trump means what he says. "We will no longer let the generosity of the American people be taken advantage of or remain unchecked," said Haley.

One hundred and twenty eight nations in the General Assembly voted to condemn and annul the U.S. decision on Jerusalem and only nine voted to support the United States.

The United States and Israel stand for the "ideals of human freedom and dignity that the United Nations is supposed to be about," said Ambassador Haley.

Looking at the particular realities of the U.N., it's hard to see coincidence between these American values and what is going on there.

Freedom House in Washington, D.C., issues an annual report in which it reports on the state of freedom in 193 nations around the world. Each nation is evaluated in terms of political rights and civil liberties, and then is given a score. According to this score, nations are then broken out into three categories -- free, partially free and not free.

Of the 128 nations that voted this week against the United States move on Jerusalem, only 55, or 43 percent, are rated by Freedom House as free. The rest have serious problems regarding political rights and/or civil liberties in their country.

The U.N. operates on very strange logic. That somehow a democracy of unfree countries voting -- one vote for each country -- produces a result that has something to do with the value of freedom.

It's somewhat akin to trial by jury where most of the jurors are convicted criminals.

What, after all, can be the meaning of despotic nations like North Korea, Cuba, Syria, Iran and Venezuela voting to express their opinion of the legitimacy of the United States recognizing Jerusalem as Israel's capital?

Adding further irony, Israel is rated by Freedom House as one of the freest nations in the world. In the Middle East/North Africa region, there are two nations out of 18 that are free. One is Israel. Yet, Israel is regularly condemned by the U.N., whereas the 16 despotic regimes in that region get no attention.

Why should the United States continue to be the largest contributor to the U.N. for what Haley called the "dubious distinction" of being disrespected and having its values flouted?

A few days before the U.N. vote, Trump gave a speech at the Reagan Building in Washington defining his National Security Strategy. He stated that "a nation that is not certain of its values cannot summon the will to defend them."

As we enter the new year, Americans should feel pride and optimism that, at last, it appears we have an American administration that is certain of our values -- human freedom and dignity as stated by Nikki Haley -- and is ready to boldly demonstrate the "will to defend" these values.

It's about time the United States is getting real about the United Nations. President Trump should get high-fives for his leadership.