Mercy for the 'Dreamers'

Star Parker
|
Posted: Feb 01, 2017 12:01 AM
Share   Tweet
The opinions expressed by columnists are their own and do not necessarily represent the views of Townhall.com. 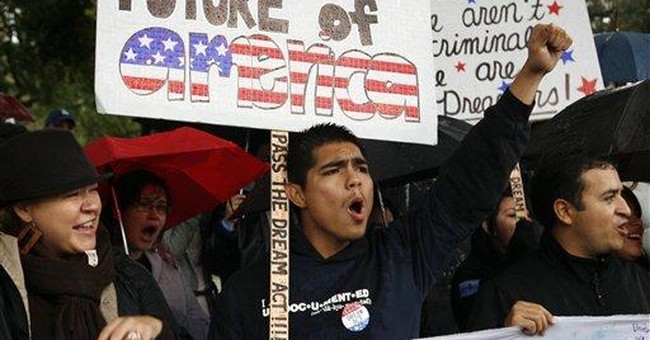 We should not allow Dreamers to forget that this is a nation of law and they received mercy.

On June 15, 2012, President Obama signed an executive order to protect those who arrived illegally to the United States as minors.

Deferred Action for Childhood Arrivals provides a two-year window to shield these people from deportation and allow them to work. They must have been under 16 when they arrived, be in school or have completed school, and have no criminal record.

The order produced consternation on two fronts. First, the nature of the action. Many feel that immigration policy, legal and illegal, should be handled comprehensively and that the first order of business must be fixing border security. Second, the form of the action — a presidential executive order. Many see this order as changing immigration law, which would therefore be unconstitutional because legislation is required.

Now we have a new president who was elected in no small part to deal with immigration. And he is moving forward deliberatively to implement his campaign pledges.

However, President Trump has so far not indicated what he intends to do regarding these so-called "dreamers" — the name derived from the DREAM Act, the legislation originally proposed to process these undocumented immigrants.

According to reports, the president is hearing different sides on this, both inside the White House and inside the Republican Party. Some say "no exceptions" and want to repeal this executive order. Others want to continue the protections for these "dreamers" — after all, they were brought here as minors and have grown up here — but want to handle the issue with legislation.

Running a country is art, not science. If it were science, we could write software and send everybody in Washington home. Unfortunately, we need leaders who understand what our country is about to make tough calls when things are not black and white.

The immigration issue is about law and law is about defining the lines you don't cross. Whether it is the physical line that defines the borders of our nation or the legal lines that protect the life, liberty and property of citizens.

Those whose arrived as minors, because their parents violated the law, do, I believe, deserve special consideration.

Certainly, as Christians, we understand that justice has two components — judgment and mercy. Judgment is the implementation of the law in its severity. Mercy is understanding and appreciating when there should be exceptions.

Senators Lindsey Graham and Dick Durbin have introduced legislation that would essentially replicate DACA. It would give all the same protections and have the same requirements, but extends the window to three years rather than two.

I think it is a good idea, but not enough. We should extend mercy to those who were brought here as minors illegally. But we should not allow them to forget that this is a nation of law and they received mercy.

Perhaps we should also include a requirement for some kind of national service, possibly in the U.S. military.

Regarding our laws, we should aspire toward the ideal to which Moses instructed the Israelites in the desert — "You shall safeguard and perform" these laws such that the other nations of the world will say, "Surely a wise and discerning people is this great nation."