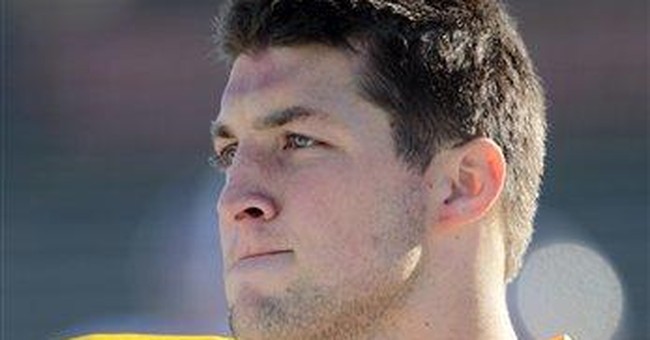 Why are pro-abortion groups so up in arms about the Tim Tebow ad that CBS will run during the Super Bowl?

According to the press release of Focus on the Family, the Christian organization sponsoring the ad, the former University of Florida Heisman Trophy winner Tebow and his mother, Pam, "will share a personal story centered on the theme of 'Celebrate Family, Celebrate Life.'''

The Tebows are devout Christians, and Pam gave birth to Tim despite advice from her doctor to abort because of illness during her pregnancy. Since the script is not publicly available, all we know is the family story and knowledge that the ad passed muster with CBS.

We spoke with Focus on the Family spokesman Gary Schneeberger and asked if the ad in any way speaks to the politics of abortion. The answer was an emphatic "no."

According to Schneeberger, it's "not selling, it is celebrating" and is about the "love between a mother and a son."

So what's provoking the letter writing campaign of feminist groups to CBS to pull the ad? Why would the National Organization of Women call this "offensive to women" or would the Women's Media Center call it "divisive"?

Sure, there's no question that Focus on the Family is pro-life and opposes legal and readily accessible abortion. But CBS wouldn't be running this ad if its focus was political advocacy.

So what's bothering these women?

First, the enabler of human brutality is de-humanization. Pro-abortionists know that our existing legalized abortion regime can only continue as long as we keep the human face off abortion.

It's why ultrasound has revolutionized this world. When young women who have doubts about taking their pregnancy to term see the live child within them, they overwhelming decide to give birth. You don't have to preach. They see that this is life and they know what to do.

I have written in the past that if the personal ultrasound experience could be conveyed to public consciousness, the abortion holocaust would stop.

The Tebow story will put this human face on abortion for the 100 million or so who will watch the Super Bowl. Nothing could be scarier for the culture of death.

When Harriet Beecher Stowe published Uncle Tom's Cabin, she put a human face on slavery. When the American public understood that slaves were human beings, the capacity to tolerate slavery was punctured.

Abraham Lincoln supposedly said to Stowe when he met her in 1862, "So you are the little woman who wrote the book that started this great war."

Last week Israel's Prime Minister Benjamin Netanyahu spoke at Auschwitz, the former Nazi death camp in Poland. It marked the 65th anniversary of the liberation of the camp, where over one million, mostly Jews, were murdered.

The six million who were slaughtered in the holocaust in Europe challenges comprehension. But the meaning of this changed when Anne Frank's diary was published in English in 1952. When the public at large read the thoughts and feelings of this young girl, recorded in hiding before she went to her death with her family, the human face of the holocaust emerged.

The second aspect of the Tebow ad that scares abortionists is that it shows that love arises from personal responsibility. This beautiful story of a mother and son shows that love is not about political claims but about individuals taking responsibility for their life and knowing that life is about more than self. It is caring for others and knowing that you are part of something bigger than just you.

At a time of great spiritual unrest in our country, I believe this courageous initiative taken by the Tebows and Focus on the Family will be well received.