Time for Steele to go as RNC chair 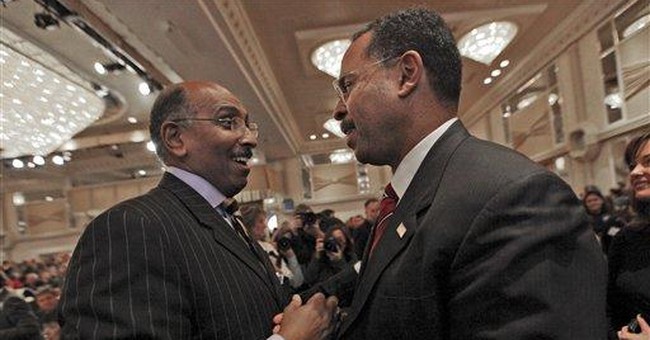 From what I see, the Republican National Committee representatives who picked Michael Steele as their new chairman made a mistake. I think Steele ought to step aside.

It pains me to say it. But it pains me more to watch the opposition party, the Republican Party, spin aimlessly and leaderless, while the Obama administration shreds to pieces, with ruthless focus and discipline, everything that this country stands for.

Yes, of course, the defining moment for me is the recent GQ magazine interview in which Steele sounds more like a Democrat than a Republican. Does a woman have a right to choose abortion? "Yeah. Absolutely." Is homosexual behavior something an individual can choose? "It's like saying, 'Tomorrow morning I'm gonna stop being black.'"

We now have the most left wing president in our history using the excuse of a recession and the leverage of his "honeymoon," together with decisive Democrat majorities in both houses of congress, to turn our country into the Soviet States of America. And instead of a clear and articulate message from the opposition, the press is writing about Steele and Rush Limbaugh.

Not only does the RNC chairman not seem to share the values of his party, or to even agree with his party's platform, but also he is a public relations disaster. The diversionary noise he has created has not only hurt Republicans, but it has helped the president move his ambitious agenda without being seriously publicly challenged.

The GQ interview is a defining moment, but it is also the tip of an iceberg that goes deep.

All conservatives have had doubts about Steele, for good reasons. We all recall his interview with Tim Russert during his 1996 Senate campaign when, after being pushed by Russert, he said he accepted Roe v Wade as "stare decisis" -- accepted legal precedent.

And, of course, there was his involvement with the Republican Leadership Council, which pushed support for pro-abortion and "gay rights" candidates.

Quite honestly, I reserved judgment about Steele's selection as RNC chairman, mustering up wishful thinking that he would get up to the challenge. That he would see the deep and sharp divisions in the country and understand that things are different now. That today we are not talking about haggling over public policy with people with whom we share basic values. Today we are fighting for the very principles that will define the future of this country.

This is not a time when we can muddle through with a leader who is not sure who he is, who is not clear about the principles of his party, and who is not consumed with the importance of the cultural war that we now confront. Mr. Obama certainly knows his own values with clarity and knows exactly what his objectives are.

The basic principles and values that enable freedom and that made America great -- family, sanctity of life, and sanctity of property, have been under siege now for many years. But today we have a president who wants to make a clean and final break from all these things. This is what is at stake.

The Republican Party needs a chairman who wants to fight this fight. It seems pretty clear that Michael Steele is not that man.