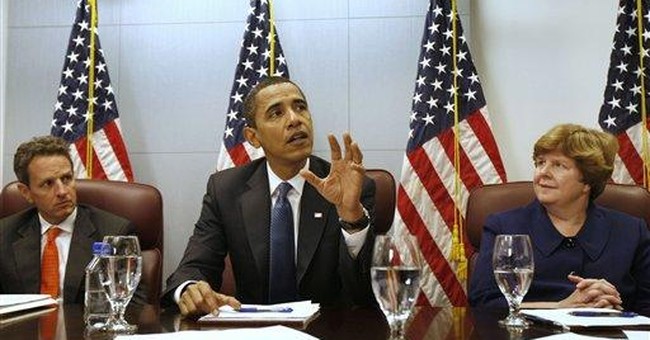 The Obama administration, completing its first full week, wasted no time getting priorities in order. First, issue formal apologies to the world, and then begin advancing massive, intrusive government at home.

The president chose Arab television, Al Arabiya, to give his first sit down interview. He took the opportunity to confirm the long held Arab view that the real problem is America and President Obama apologized on our behalf.

"...America was not born as a colonial power," he told the Arab viewing audience - implying we are now. And he regretfully confessed that "We sometimes make mistakes. We are not perfect."

Sorry, but weren't we the ones that were attacked? Do we not stand in long lines and disrobe in airports because of them? Does anyone recall anywhere, anytime hearing apologies from any Arab or Muslim leader?

At the annual World Economic Forum meeting in Davos, Switzerland, the president's confidant and advisor Valery Jarrett continued with apologies. This time to the world's business and political movers and shakers.

Ms. Jarrett told the crowd that this economic crisis did not occur by "happenstance" but is the result of our "profound irresponsibility."

And the Europeans, Asians, and Russians couldn't have agreed more.

"Chinese and Russian leaders blamed a free-wheeling U.S. financial system as the source of the global economic crisis," according the Wall Street Journal.

Our new president is a man of action as well as a man of words, so while he and his staff apologized to the world for who we have been, he began the task at home to make us a different country.

Under the pretense of economic stimulus, the president began in earnest his work to nationalize the American economy.

He lobbied all week for a pork-laden spending bill that, according to the Congressional Budget Office, will add another trillion dollars to our national debt, which is rapidly becoming as large as our gross domestic product - the value of all goods and services that Americans produce in one year.

We should be thinking about King Solomon's words in Ecclesiastes that there is "nothing new under the sun."

Nowhere -- anytime or anyplace -- has economic growth and prosperity been created by government taking the money of its own citizens and spending it as it sees fit.

Aside from the pure waste, government spending for "stimulus" and bailouts prevents and discourages the real adjustments that need to take place.

In an interview last December, Harvard Business School professor Clayton Christensen pointed out that tough and lean times are exactly the environment that produces innovation. According to the professor, "...if you give people a lot of money, it gives them the privilege of pursuing the wrong strategy for a very long time. In an environment where you've got to push innovations out the door fast and keep the cost of innovation low, the probability that you'll be successful is actually much higher."

It's exactly this kind of innovation that we need. And it's exactly what we will not get as we pour trillions of debt-ridden government money -- obligations made on us taxpayers -- into the economy.

Sure there will be beneficiaries. But they're all in Washington or getting money directly from Washington.

At $3.2 billion, lobbying expenditures in 2008 were up 14 percent over 2007. Of the nation's major metropolitan areas of more than 1 million, Washington has the second-lowest unemployment rate in the country. And its average household income is almost 50 percent above the nation's average.

If and when Barack Obama stops genuflecting before an unfree world and remembers that America is about freedom, perhaps our recovery will start.