Traditional marriage is vital to kids and education 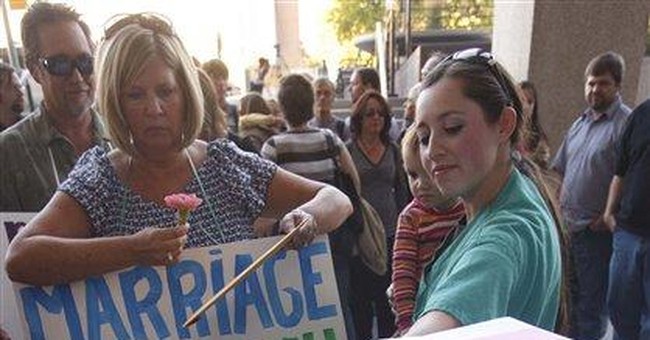 Proposition 8 is the ballot initiative in California that, if passed in November, will amend California's constitution to define marriage as between a man and a woman. The initiative follows a decision by the California Supreme Court last May that legalized homosexual marriage.

In a recent ad run by "No on 8", California State Superintendent of Public Instruction, Jack O'Connell, says "Proposition 8 has nothing to do with schools or kids .... our schools aren't required to teach anything about marriage."

To call this misleading would be the understatement of the 2008 campaign season.

The California Department of Education makes a comprehensive sex education curriculum available to every school district, but specifies that it's voluntary.

A poll done by the Public Policy Institute of California in 2006 showed that 78 percent of California's adults want comprehensive sex education in the public schools. According to the "Yes on 8" campaign, 96 percent of the school districts currently provide it.

If a school district does provide sex education, it must follow the guidelines of the California Department of Education. According to these guidelines, as they appear on the CDE website, the schools "shall teach respect for marriage and committed relationships."

If Proposition 8 has "nothing to do with schools or kids,'' then why has the California Teachers Association, the union of California's teachers and public school employees, contributed well over $1 million to the "No on 8" campaign?

The teachers union opposes school choice and vouchers, claiming on its Web site that vouchers "hurt students and schools by draining scarce resources away from public education." Yet the union somehow sees it helping education to write a check for a million dollars to keep homosexual marriage legal.

This same California teachers union weighed in earlier this year to support a California appeals court decision, subsequently reversed, which would have effectively shut down home schooling in the State of California.

Who is hurt the most? Our most vulnerable kids.

According to a report released earlier this year by Colin Powell's organization America's Promise, about 70 percent of kids who enter public school in our nation's 50 largest school districts graduate.

In Los Angeles, the second largest school district in the country, 45 percent of kids graduate. These are overwhelmingly Latino and black kids from largely troubled or broken families.

The greatest influence on how a child performs in school is the home from which that child comes. Take kids from already troubled homes and put them in schools where traditional values are at best taught as a footnote to a large menu of possible lifestyles, and the result is children and communities that have no future.

Maintaining the integrity marriage and family in California, the nation's largest state, is critical for children not just in California, but also in the whole country. Let's hope that Californians vote in November to save traditional marriage and help pull our nation back from moral oblivion.