Change we should worry about 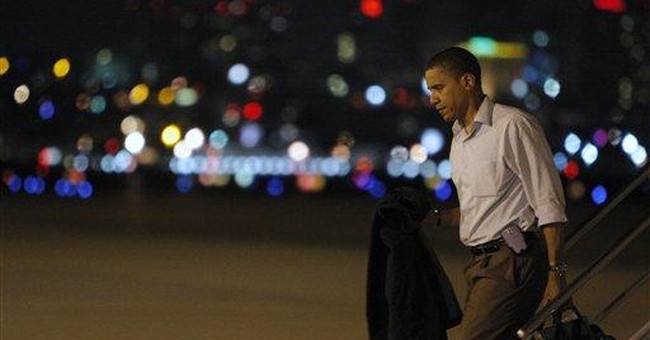 Are we undergoing some kind of sea change of attitudes in America today?

Washington Post columnist E.J. Dionne reflects such sentiment -- perhaps I should say wishful thinking -- by those on the left that indeed we are. He says capitalism is having a "reality check."

The era of big government is back, according to Dionne. Americans now want to re-regulate, re-tax, redistribute, and re-socially engineer.

Although enthusiasm for the Republican Party is without question on the wane, there is no accompanying surge of popularity of the Democratic Party.

According to recent reporting from the Pew Research Center, favorability ratings for the Republican Party have gone from 55 percent in 1993 to 39 percent in 2007 as unfavorable ratings increased from 35 percent to 53 percent. However, over the same period, favorability ratings for the Democratic Party have also declined, although more modestly -- from the high 50s in 1993 to the low 50s in 2007. And Democratic Party unfavorable ratings went up from around 35 percent to 41 percent.

And let's not forget that both houses of Congress are controlled by Democrats where approval hovers at an all time low.

What do I think is actually going on?

Under Republican leaders in the last 25 years, we've seen government grow, entitlements expand, and -- except for welfare reform in 1996, passed by a Republican congress and signed by a Democratic president -- we've seen little in the way of market-based reforms and government rollback.

Despite accusations that John McCain is simply running for George W. Bush's third term, the ease with which Sen. Barack Obama has embraced one of President Bush's signature programs -- faith-based initiatives, in which government doles out funds to religious institutions -- tells us something. And it is not that Obama is becoming more conservative.

The Democratic Party, on the other hand, has remained true to its principles of big government and moral relativism. And it's not registering more enthusiasm among voters.

It just doesn't take rocket science or an expensive political consultant to appreciate that voters are, for darned good reason, unhappy. Politically, what being unhappy means is either not voting or voting for whatever the alternative is.

What also is happening is we are witnessing a phenomenon that, at least for the time being, is personal -- not ideological.

Obama is succeeding in tapping into the public's general disgust with everything and using his considerable charm and calm and reassuring persona to exploit it.

It's why he may succeed in flip-flopping all over the place and taking liberties with the details of stands he takes over time. Much of the enthusiasm he is generating is not being generated by those details. It is being generating by him.

The Pew Research Center recent report shows an incredible gap in visibility of the two candidates. They report 71 percent visibility of Obama and 11 percent for McCain. This is the "percentage of the public that has heard the most about each candidate that week."

Roger Ailes, president of Fox News, says in his book "You Are the Message" how he helped Ronald Reagan get re-elected in 1984 by getting him to stop worrying about details and just be himself. And, in fact, Reagan's campaign that year was about "morning in America."

So the 2008 election is about change. It's not ideology. It's personal. And those who care about limited government and traditional values should be worried.