Housing Market Needs a Dose of More Reality, Not Government 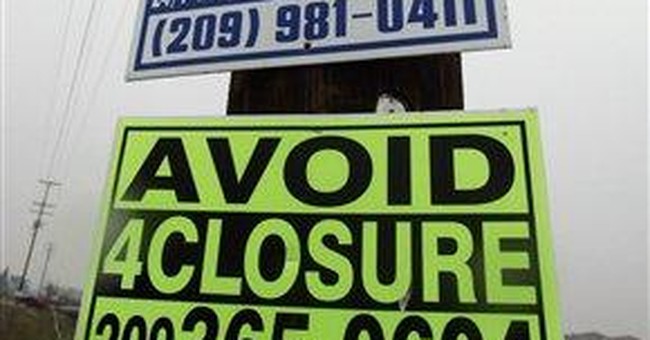 Watching the housing/mortgage/financial crisis unfold, I keep thinking about the joke about the difference between neurotics and psychotics. The former builds castles in the sky and the latter moves into them.

Until the bubble burst, a lot of folks were living in these castles in the air, made possible by bountiful and creative mortgage financing.

Now, we're being reminded that there is indeed something called reality from which many became detached.

Peter Thiel, president of the global hedge fund Clarium Capital Management and co-founder of PayPal, writing about market bubbles in the latest Policy Review journal of the Hoover Institution, says that "U.S. real estate prices in 2005 were more distorted than in 1929, 1979 or 1989, or at any other time in history."

As with every crisis, there is a search for the culprit -- the cause of it all. But what is striking in what we are now witnessing is the diffuse and highly egalitarian nature of the suffering.

The pain is spread across the full spectrum of the housing marketplace, from the homeowner, to the brokers, to the loan originators, to the financial geniuses who designed and managed the high-tech securities delivering John Smith's loan to the global capital markets, to the CEOs of the financial giants managing all of this.

We're, of course, hearing rhetoric about so-called predatory lending, and low-income borrowers being peddled loans that they could neither understand nor afford. But if this was really about predators, they had to be predators with a death wish because the hunters have gone to slaughter along with the hunted.

As the Cato Institute's Alan Reynolds points out, foreclosures have not been limited to low-income families with sub-prime adjustable-rate mortgages. Reynolds, citing the Mortgage Bankers Association, notes that "prime mortgages (mostly fixed-rate) accounted for 45 percent of all foreclosures in the third quarter of last year, while sub-prime ARMs accounted for 43 percent."

There is reasoning tracing all this to the Community Reinvestment Act passed in 1977 under President Jimmy Carter, designed to address allegations of redlining -- banks refusing to set up shop and lend in low-income minority neighborhoods.

The claim here is that the CRA put banks between a rock and hard place. They had to either loosen their lending standards and accept the inevitable financial consequences or incur fines.

Undoubtedly, the CRA did cause distortions, as all political impositions on markets do, and surely contributed to the problem. But the explosion could not have occurred without problems and distortions in every part of this market.

If, indeed, we could identify one culprit, then we might imagine a "silver bullet" that could fix the problem. But, as Treasury Secretary Henry Paulson pointed out, in announcing the broad reforms suggested by the President's Working Group, no such "silver bullet" exists.

To go back to the psychotic living in the castle in the sky, the task today must be to restore a sense of reality to the patient rather than moving in with him. Unfortunately, what many of our friends from the Democratic Party are proposing is closer to the latter.

A return to reality means bolstering the integrity of law and contracts and the restoration of a sense of personal responsibility on the part of all market participants. A healthy housing market depends on this. But so does our whole free society.

Proposals such as allowing bankruptcy judges to rewrite mortgage terms contributes to chaotic fundamentals as opposed to remedying this.

Similarly, massive government intervention, whether it be through moratoriums on foreclosures and interest-rate freezes, like Democratic presidential contender Hillary Rodham Clinton wants, or government takeovers and refinancing of loans, closer to what we're hearing from her rival for the nomination, Barack Obama, creates new distortions and free-lunch illusions.

It may sound nice for the government to hold up prices and fend off foreclosures. But where is the justice for those who sat this out?

It is true that only about half of black families own their homes, compared to three-quarters of white families. A drop in home prices to a new low could put homeownership within reach for those who could not afford it previously. Must the innocent and responsible pay the price for those who decided to climb out on a limb?

Let's not forget now that our resilient and prosperous free society is built on law and personal responsibility. Pain is a normal part of life. It tells us something is wrong. What is critical is that we get the right message about the nature of the problem.

Correction from last week: The statistic that 26 percent of Americans are evangelical Christians comes from the Pew Forum on Religion and Public Life and not the Pew Foundation.