To Understand Ronald Reagan, Go to His Ranch

Spencer Brown
|
Posted: May 03, 2018 12:01 AM
Share   Tweet
The opinions expressed by columnists are their own and do not necessarily represent the views of Townhall.com. 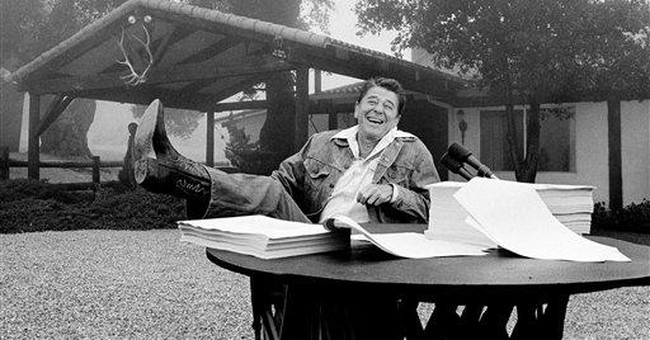 “To understand this great man,” wrote Reagan biographer Edmund Morris, “go to the ranch—that’s where you’ll find his soul.”

These words still ring true today thanks to the visionary work of Young America's Foundation to preserve the Reagan Ranch as a lasting monument to the ideas and achievements of our 40th President.

Each year of his Presidency, Ronald Reagan invited students attending Young America’s Foundation’s National Conservative Student Conference to the White House for policy briefings. Reagan later recalled, "Together we accomplished much of what has come to be known as the Reagan Revolution.”

In an address to the Foundation’s 1993 National Conservative Student Conference, Reagan reiterated his longtime partnership with the Foundation. He said, “We helped turn the tide against totalitarianism,” and together, we witnessed the “rebirth of liberty” worldwide.

Young America’s Foundation stepped forward to save President Reagan’s Rancho del Cielo in 1998, cementing the special and longstanding relationship between President Reagan and YAF. After working with Ronald Reagan to bring conservative ideas to young people around the country for decades, it was only natural for the Foundation to take up Reagan’s mantle in this way.

The 688-acre mountaintop retreat in the Santa Ynez Mountains above Santa Barbara, California, was the place President Reagan went to "think things out." Over the last two decades, scores of conservative leaders and thousands of students have followed in his footsteps.

Many students who visit the Ranch today only know President Reagan through their history books. But when they visit Rancho del Cielo, they gain a greater appreciation for Ronald Reagan’s values, character, and lasting accomplishments. A visit to Rancho del Cielo has become a rite of passage for all young conservatives.

From the Liberty Bell-shaped shower head and stone patio laid by Reagan himself; to a row of chainsaws and a trail-worn 1962 Willys Jeep in the tack barn, the humble spirit of our 40th  President is unmistakable.

President Reagan called the Ranch his “open cathedral” where he would go to restore his focus, renew his energy, reflect on world events, and pray while riding his horse, working the land, and enjoying God’s creation.

It was during his days clearing brush, riding the trails, and taking in the serene views of the Ranch that President Reagan formulated the policies and strategies that would change the course of history, restore America’s faith in its exceptionalism, and topple the evil Soviet empire. The importance of Rancho del Cielo to American and world history cannot be overstated. In the words of President Reagan’s son, Michael, “Without this place, the [Berlin] Wall still stands.”

The Reagan Ranch was where President Reagan hosted world leaders—including Queen Elizabeth II, Prince Philip, Lady Margaret Thatcher, and Mikhail and Raisa Gorbachev—and, in 1981, signed the largest tax cut in American history. It was at the Ranch where he delivered many of his most important national radio addresses.

Over the last two decades, Young America's Foundation has worked tirelessly to maintain Rancho del Cielo as one of America's premier Presidential properties while preserving and interpreting its rich history for generations to come.

Paired with its Reagan Ranch Center with state-of-the-art conference space and museum galleries in nearby Santa Barbara, Young America's Foundation has built the largest conservative site on the West Coast. Throughout the year at conferences, seminars, and special events, Young America's Foundation provides an “only-at-YAF” experience to America's leading student activists and conservatives from around the globe.

Looking ahead at the next two decades and beyond, Young America's Foundation eagerly carries forward one of President Reagan's key goals through the stewardship of his beloved ranch home: To ignite a spark in young people for conservative ideas that will light up the rest of their lives.

To learn more about Young America’s Foundation and the Reagan Ranch visit YAF.org.