Sheriff David Clarke, Ret.
|
Posted: Nov 26, 2019 12:20 PM
Share   Tweet
The opinions expressed by columnists are their own and do not necessarily represent the views of Townhall.com. 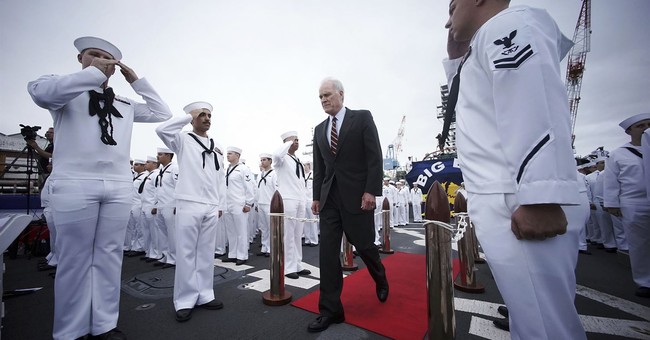 Some people in government have it backward. This latest flap over Navy Secretary Richard Spencer’s attempt to buck the chain-of-command is a prime example.

What these bureaucrats seem to have forgotten over time or maybe were never taught about is how our system of government works—we the people are in charge, and they serve us, not the other way around. They get away with it because many of us have put up with the nonsense from these goons.

Therefore, perhaps everyone selected as a presidential appointee or those who take jobs as a federal bureaucrat should be required to take a basic course on how our Constitution was designed to work. Ours is a representative democracy. We the people get to select whomever we want to serve us in a particular capacity. Somewhere, somehow, over time, individual bureaucrats and even presidential appointees seem to think that we can’t be trusted with enfranchisement. They believe they are there to serve as insurance against any mistake they think we might make at the ballot box. The arrogance of these deep-staters is profound.

Every time I read of the chutzpah exhibited by these swamp-dwellers, it makes me sick. The Founding Fathers never envisioned or wanted a shadow government to emerge. Instead, it was anathema to their fear of a dominant central government in the form of an administrative state of unelected bureaucrats emerging.

If these elitist bureaucrats believe that we the people made a mistake in electing Trump, I have a little secret to tell them. We did not make a mistake. We hit the jackpot! We elected a leader who promised to go to Washington and take our government back from the D.C. elites, and not only did he promise, he is delivering. The D.C. establishment is shocked by an outsider businessman from Queens, New York—of all places—who doesn’t speak like them, who didn’t come up in their career political circles, and who refuses to kiss their rings.

As a former elected official myself, I had to remind career civil servants in my office who thought they knew better than me about decisions reserved for me to make that the voters of the county elected me to represent them in the office of Sheriff and not them. I was accountable to the voters, not the career civil servants. I had several officers in high-level command positions who served at my pleasure. I told them that if they didn’t like my decisions, then they should run for sheriff in the next election. I was elected for four consecutive terms. Like President Trump, I would have fired anybody undermining me. In a command and control structure that defines law enforcement and the military with its chain-of-command, you follow the orders of your superiors. In the military the president is, by Article II Section 2 of the Constitution, the commander in chief of the military. It’s that simple. The Founding Fathers wanted civilian control of the military through the electorate.

Additionally the president is at the top of the food chain of the entire administration. That includes the intelligence agencies, lawyers in the Department of Justice and ambassadors in the State Department. That means what he says goes; he sets foreign policy, not an ambassador or intelligence agency head and he sets immigration policy, not a DOJ lawyer. If he wants to replace you, have the decency to leave on your own.

Former Secretary of Defense Donald Rumsfeld had a list he lived by while serving as a presidential appointee. One was while serving the president be able to resign, you will do yourself and the president a favor. Another one was, never begin to think you are the president—the Constitution provides for only one. Therefore, the first move by anybody asked by any president to serve at his pleasure in an appointed position should be to immediately contact Rumsfeld and ask for a copy of his rules for serving.

When the president wants to make a change in personnel in high-ranking positions, he usually first asks for their resignation so they can leave with their head held high before having to fire them. Refusal to resign is an act of arrogance and obstinance. Daring the president to fire you is nothing more than trying to make yourself a martyr. It’s an ego trip. Just leave.

Navy Secretary Spencer is simply another name in a long list of deep-staters who think it’s OK to defy the president. Former Department of Justice attorney Sally Yates was the first to defy President Trump’s policy on immigration. She, in a very public in-your-face way, told department lawyers not to carry out the policy, and he fired her. Many others do it behind President Trump’s back. That’s worse because it’s the cowardly approach. Spencer, no doubt, will become the latest darling of the leftist media. They’ll use him to slam Trump. When they use him up, they’ll move on to the next insubordinate. However, what they have not figured out yet is that while the media wets their pants over the departure of Spencer, America is yawning. They get it.

It’s time for unelected bureaucrats to get a crash course on the U.S. Constitution, and to stop whining. By the way. I don’t remember any liberal media or Democrats in Congress complaining when Barack Obama relieved General Stanley McChrystal from his command after he criticized his commander in chief in a Rolling Stone Magazine article.