Sheriff David Clarke, Ret.
|
Posted: Aug 01, 2019 12:01 AM
Share   Tweet
The opinions expressed by columnists are their own and do not necessarily represent the views of Townhall.com. 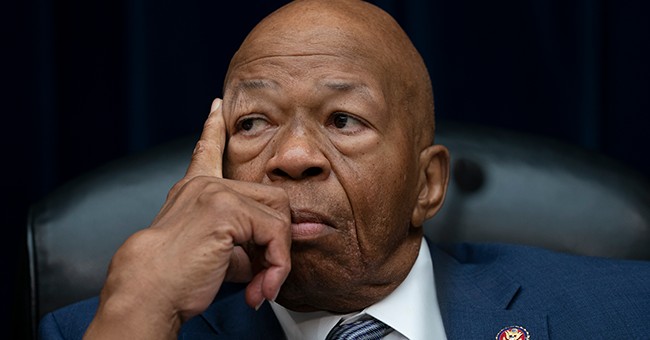 Remember the fairy tale about the emperor’s new clothes? It’s about an emperor who pays a lot of money for new magic clothes that can only be seen by wise people. The clothes do not exist, but the emperor does not admit he cannot see them, because he does not want to seem stupid. The story is often used to describe a situation where people are afraid to criticize something because everyone else seems to think it is good or important. Well, it’s time to shine a light on Congressman Elijah Cummings' emperor’s new clothes moment.

Cummings has carried himself in Washington, D.C. for over 20 years, flopping around as if he has magic clothes that only wise people can see. Cummings is not alone. Every member of the Congressional Black Caucus also believes their magic clothing is their skin color and its value for the Democratic Party. They serve as an attack force against white Republicans, play the race card when called upon and can deliver black votes in elections. Black voters have been duped into believing that Cummings is doing something for them and they, in turn, keep returning his stiff back to Congress.The Democratic Party, and Nancy Pelosi for example, is too afraid to criticize members of the Congressional Black Caucus. Republicans are even more fearful. Therefore, everybody goes along with the uselessness of Cummings and others.

Enter President Donald J. Trump. He’s not your typical Republican. He calls a spade a spade. Wait; am I racist for saying that? LOL. Trump is the only person in Washington, D.C. with courage and wisdom. Trump exposed Cummings ,showing that he brings no value to the people of his congressional district, many who live in squalor. Cummings has been fooling people for decades. He’s not the only one. Trump should call out all of them, such as Bobby Rush, Frederica Wilson, John Lewis, Charlie Rangel, Sheila Jackson Lee, and Bobby Scott.  Outside of their undefeatable value for the Democratic Party, they are useless do-nothings and are never held accountable for anything.  Detroit was only able to get rid of John Conyers because he was found to be a serial sex harasser. These duds all represent districts with vast swaths of ghetto neighborhoods. When Trump pointed out the crime-infested disaster area that West Baltimore has become, it shocked everybody, even Republicans and the conservative media. They were stunned that Trump attacked a member of the Congressional Black Caucus. To do so was like touching a fourth rail of American politics. But, Trump is willing to tell Americans the truth, and this is why his supporters adore him.

When it comes to bringing home the bacon, Cummings delivers. The problem is that the billions in federal funding never reach the poor or decaying neighborhoods. It goes to Democratic supporters, like the teacher unions and other public employee unions, as a thank you for their support. It also goes to community activist groups who use the money to fund demonstration activity and voter registration drives. Baltimore received $1.8 billion in Obama stimulus funding. It was meant for infrastructure, schools and reducing poverty. It never made it that far, though. A recent news headline reads that several Baltimore schools report 0 students proficient in math and reading. Zero. Another Baltimore News headline says that Baltimore students score near the bottom in reading and math on the key national assessment. Baltimore homicide rate is at a record high and deadlier than Chicago and Detroit. Another story says that nearly 25 percent of Baltimore residents live below the poverty level. 65 percent of Baltimore’s residents are black.

All of this carnage in Baltimore has happened under the watch of Cummings.

Rather than accept his failure, Cummings responded to Trump that he spends every day in his district, trying to help his neighbors. If this is the result of his help, he should stop helping them and resign. His resignation would be of great help to the poor in Baltimore.

You can take Baltimore out of everything I have pointed out and replace it with Cleveland, Milwaukee, Chicago, Seattle, Portland, St. Louis, Los Angeles, San Francisco, New York, Washington, D.C., Detroit, Newark and any other city with a large black population. These cities are all led by Democratic politicians. Failed liberal urban policy creates ghettos, not a lack of federal funding. These are disaster areas and should be condemned as inhabitable, yet members of the Congressional Black Caucus are okay with their residents living a poor quality of life. Life is pretty good for Cummings and the Black Caucus as pointed out in a New York Times story that talked about lavish lifestyles by this group in D.C. The same cannot be said for the poor in Baltimore and other ghetto American cities.

My fear, however, is that the Democrats and Pelosi will exploit the situation as another chance to pour money down a sinkhole and ask for billions more in federal funding under the scam of urban renewal. Congressional GOP members will oblige and vote to approve it in the act of flaunting their racial sensitivity. After all, it’s an election year for every member of the House of Representatives. The term "urban renewal" sounds terrific, right? It’s a scam. Nothing in the American ghetto ever gets renewed or better — not the schools, not the housing, not the crime rate.

The answer is a change in the political class in these areas along with the elimination of the urban pathologies, the self-inflicted cultural rot, and dysfunction of the underclass that plagues the black community. These are steep climbs, but possible. It can begin with electing new congressional members who are focused on getting things done, and not sitting back, hanging out, like Cummings who thinks he’s wearing magic clothing, until he was exposed for the fraud politician he is. It’s time for Cummings to admit his tenure is a failure and to move aside. The good people of Baltimore living in the dangerous ghettos deserve better.