Not Just Evidence—Empirical Research and Data Matter, Too

Sheriff David Clarke, Ret.
|
Posted: Oct 10, 2018 12:01 AM
Share   Tweet
The opinions expressed by columnists are their own and do not necessarily represent the views of Townhall.com. 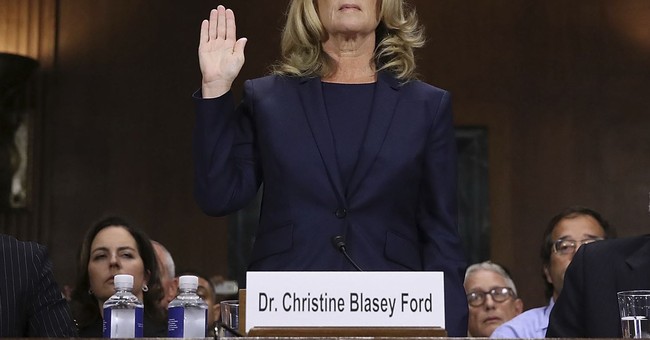 The Judge Brett Kavanaugh confirmation hearing before the Senate Judiciary committee has served as many things for self-interested people with an agenda. We have heard that one of the upsides was that it put attention on the issue of rape in America. As if that horrible crime has been ignored in our society. It hasn’t. Others have said it focuses on victims, many who do not report the crime because they won’t be believed. There is no way unfortunately of having accurate data on crimes not reported. Politically the left has made a cottage industry on using sensitive and explosive issues to hatch a political movement like MeToo, Black Lives Matter (remember hands up, don’t shoot?) and now taking a knee during the National Anthem in the NFL.

This exploitation causes great harm to what otherwise might be legitimate claims about rape, police use of force, sexual harassment and other claims of discrimination on the basis of race, gender or sexual preference for example. Myths, propaganda and a misuse of statistics replace empirical studies, research and accurate data in an emotional argument. The truth becomes an early casualty of this kind of political warfare. Constitutional processes are bastardized, the rule of law is shredded in the interest of a political win, no matter the great damage to the republic. With big media acting as their propaganda machine, liberals and the left are able to pedal a lie in the morning all across the nation before as the saying concludes, the truth can even get its pants on. This puts the opposing side at a huge disadvantage in crafting an effective counter narrative. It isn’t until well after all the emotional hysteria that empirical research can have a say amongst all the screaming and shouting.

Justice Kavanaugh having been confirmed and sworn in, we are at the point where research, study and accurate data get their say in the matter. Unfortunately, however, everybody took their signs, stopped their chants and the media moved on to the next issue that can be turned into political theater.

In spite of that, the truth still deserves its say about the ugly crime of rape and believability.

I had the audacity early on to counter the dangerous claim that all allegations of rape should be believed. I said no, only credible ones do. I was asked what makes a complaint of a crime and that a particular person did it credible? As a 40 year law enforcement veteran the answer is pretty simple. Corroboration and evidence. In the case of the smears made against Justice Kavanaugh we had neither, not to mention the fact that the allegation occurred 36 years ago. That does not make this a he said, she said situation as some have erroneously reported including some lawyers. It means we can conclude that Brett Kavanaugh did not rape or attempt to rape anyone. This needs to be said unequivocally as President Trump did before the nation during Kavanaugh’s swearing-in. To put it any other way leaves an unfair shroud of suspicion hanging over an innocent man.

Let’s examine empirical research and data on the issue of whether all claims of rape should be believed.

A recent Washington Times news column took the time to look at empirical research on sexual assault. The left propagated the talking point over and over that only 2 percent of rape allegations turn out not to be true. Research says otherwise. Criminologist Brent E. Turvey dispels the myth that only 2 percent of rape allegations are fraudulent saying, “There is no shortage of politicians, victims’ advocates and news articles claiming that the nationwide false report for rape and sexual assault is almost nonexistent presenting a figure of around 2 percent.” He goes on to say that, “This figure is not only inaccurate, but also it has no basis in reality. Reporting it publicly as a valid frequency rate with any empirical basis is either scientifically negligent or fraudulent.” How do you turn that into a slogan or put it on a cardboard sign?

The Times cites another researcher on the issue of rape, Elaine Donnley from the Center for Military Readiness who collects data for the Defense Department. She says that, “It appears that die-hard opponents of Kavanaugh have invented a narrative to imply that false allegations hardly ever happen. “You see where we're going with this,” she asks. That, “Any man who doubts Ford is hostile to women experiencing abuse.” The Pentagon shows false reports of rape to average 18 percent since 2009. Other studies cite as high as 40 percent of rape allegations are false. Even the National Sexual Violence Resource Center puts the false report rate between 2 and 10 percent. For the left, the 2 percent figure supports their narrative so they use it.

This is where constitutional concepts such as due process and the rule of law are gratefully the bedrock of our system of justice. The rule of law is defined as the restriction of the arbitrary exercise of power by subordinating it to well-defined and established laws. That was under assault during the Kavanaugh confirmation hearing. We got a look at what this country would look like without the Constitution and it wasn’t pretty. In fact it was scary. Senator Corey Booker said, “guilty or innocent, Kavanaugh needs to withdraw.” Other Democrat senators echoed similar sentiment.

Emmett Till a young black kid visiting his grandmother in Mississippi was accused by a white woman of whistling and flirting with her. Under the every female victim is telling the truth standard that the left is promoting, her husband and a few others disregarded concepts like due process, the rule of law and replaced it with mob rule. They kidnapped him, shot him in the head and threw his body in a nearby lake without corroboration or evidence. She later recanted. This isn’t meant to be a parallel to the rape allegations for Christine Ford. It is intended to show the slippery slope we approach when the Constitution is obliterated and trampled upon, the rule of law is turned upside down on its head and due process is taken from Lady Justice and put in the hands of a mob of politically motivated people with an agenda. I don’t want that and neither should you.