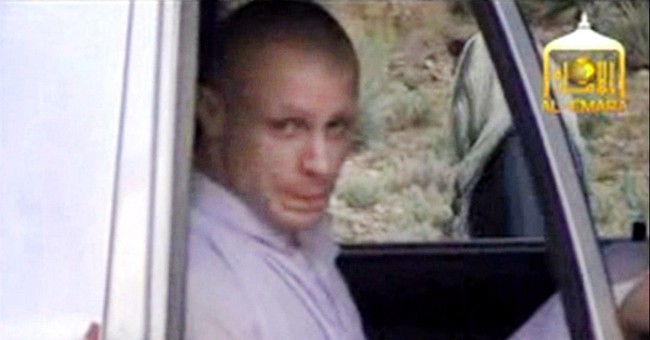 Obama’s professional protectors in the media are displeased with questions from skeptical Americans. The Rose Garden photo op and embellished story of the president bringing home a captured warrior unraveled in roughly 2.5 seconds. Turns out, it was at best a dubious deal, at worst a treasonous sell-out, returning five of the deadliest captured jihadists to their fight, in exchange for a likely deserter and possible defector. Either way, it was misrepresented to the public and designed to bury questions the president didn’t want to address.


The public backlash diminishing their tingle-inducing hero is unwelcome so the Big Hairs and Big Pens lashed back. The commentariat, blogosphere, and twitterverse are pushing a catalog of rebuttals and supposed hypocrisies to undermine the president’s detractors:

Critics would just leave Bergdahl in captivity forever, a position anathema to “leave no soldier behind.”

It’s a vacuous rebuttal. Skeptics aren’t criticizing any recovery; they’re criticizing the substance of the trade that happened. They deny it was a sound agreement that protects national security. They believe the administration both gave up too much and credulously accepted promises about restraints on the liberated terrorists. They point to the administration’s illegal secrecy from Congress as another cause for suspicion. Arguing the administration broke the law, harmed the national interest, and got taken at the poker table is not remotely the same as arguing it shouldn’t have been seeking Bergdahl’s release.

People who previously posted or tweeted support for Bergdahl are hypocrites if they criticize the president now.

Another cute trick of the president’s defenders is citing tweets and web posts of politicians and others who called upon Obama to seek Bergdahl’s release. This is more inanity. People thought Bergdahl was an honorable soldier and POW. But a lot has come out about the man who declared his hate and loathing for America before he slipped away from his post, his sworn duties, and protecting his comrades in arms. And a lot more has come out about the aid and comfort Obama gave the enemy in the selection of prisoners to return. What has come out demands questions be asked and answered.

This argument insults the intelligence of its proponents. Context matters. Skeptics aren't hating on beards; they are reasonably reading cultural clues. A flowing beard on a Bible thumping, duck hunting Southerner suggests one thing. A flowing beard on a man who says a Muslim blessing as he takes the microphone in the Rose Garden suggests a different thing. People are trying to connect dots and understand if there’s any relation to young Bergdahl declaring America “a horror.”
Suggesting that a beard is a beard is obtuseness beneath liberals' self proclaimed subtle intelligence.

Now, let’s acknowledge a couple things: First, despite harsh criticism, the deal could have arguable merits. Besides liberal defenders, Charles Krauthammer has argued from the right that hard choices like prisoner swaps are part of ending wars and living with hostile powers. However, the weight of informed comment is against what happened, including from some liberal commentators and, importantly, many angry soldiers and veterans who loathe Bergdahl’s conduct and believe the concessions to win his release were contemptible and dangerous.

Second, it’s impossible to interpret any event without factoring in Barack Obama’s steeply discounted credibility. The man will lie about anything that advances his designs. As Dennis Prager observed, that perception is not confined to Obama’s critics; it’s universal. “Iran doesn’t believe his threats. Our allies don’t believe his promises. It’s not just me; it’s not talk radio; it’s not conservatives: No one trusts him! He will say anything at any time to prevail. He doesn’t give a damn about the truth.”

Too, a lot of intensity behind the criticism may be less about the merits of the deal than about the chasm between reality and the politically helpful fantasy the White House tried to sell to restore some luster and get the VA scandal off the front page. Susan Rice trotted to the Sunday shows to declare Bergdahl had served with “honor and distinction” when the administration knew the opposite was likely true. The White House claimed to have briefed Congress on the prisoner release from Gitmo, as required by law. But when even Senator Diane Feinstein blew the whistle on that lie, team Obama alternately argued Bergdahl’s health was so bad he had to be saved immediately, or that Taliban negotiators “required” secrecy and vowed to kill him if word of the talks leaked. Sure, the shrewd terrorists would destroy a chip they could trade for five top commanders, why, exactly?

Finally, some of the hostile reaction to this deal is distrust of a man who would lie about everything from the circumstances of his mother’s death, to the content of his pastor’s vision, to his plans for the national debt, to the security of your personal health insurance arrangements, or anything else, just to get the next thing he wants. And, the rage that comes from knowing he has a stable of national media ponies who will trot out whatever he says, and media watchdogs who will bark not at him, but at his critics.

Obama’s choices and his intentions for America are the modern “riddle wrapped in a mystery inside an enigma.