Obama's Henchmen and the Rise of Commufascism 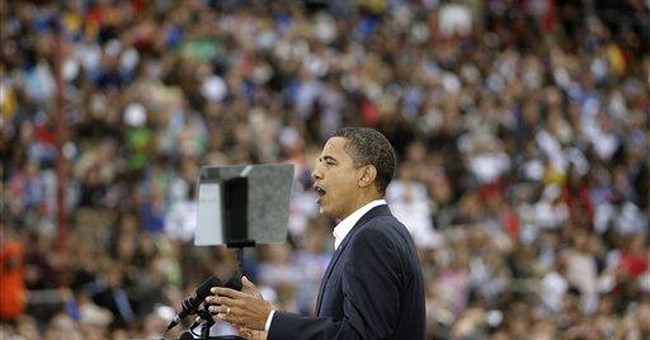 The secret to selling bad ideas is to make sure they are the only ones available.  This is how totalitarian regimes take power. Whether it was Adolf Hitler in Nazi Germany or Vladimir Lenin in Communist Russia, the pattern is largely the same – totalitarian dictators come to power by enshrining themselves as cults of personality and then creating political monopolies through often less than delicate campaigns of indoctrination and censorship – especially censorship enshrouded in the intimidating aura of state power.  Ironically, these cloven-tongued leaders often rise to dominance by preaching power to those they will dominate, provision to those they will impoverish, and liberty to those they will force into state labor.  Whether they claim to be left or right, revolutionary or reactionary, communist or fascist, the result is always the same – tyranny.

The great discomfort for many Americans as they watch the current presidential contest is that the scent of such totalitarianism hangs heavy in the air; the pattern so familiar in European dictatorships seems eerily present in Barak Obama’s presidential campaign.   Senator Obama, obviously intelligent and gifted with enviable powers of communication, has for all of his eloquence, done very little in the real world other than campaign for office.  His supporters can not tell you what he has done that qualifies him to run the most powerful nation the world has ever known, but they know he was born for the job – they were there at the convention; they heard the speech; they felt the magic; chills ran up their legs, and they cried their eyelashes off as Mr. Obama stood tall between the ivory columns of a Greek temple to accept his party’s nomination for President of the United States.

If there was any remaining question of his revolutionary greatness, scattered around the nation are tri-color campaign posters of Mr. Obama, bearing a striking resemblance to the larger than life representations of Lenin, Marx, and Engels used by soviet propagandists in the glory days of Mother Russia.  These communist styled knock-offs featuring Mr. Obama staring nobly – if melodramatically – into the distance and emblazoned with one-word utopian mantras such as “Change,” “Progress,” or “Hope,” were designed by Shepard Fairey whose obsession with communist propaganda overflows in his “OBEY” brand website which brandishes a Cyrillic-styled banner that reads “Propaganda Engineering” and boasts the company motto “Manufacturing Quality Dissent Since 1989.”

The nod to Chomsky notwithstanding, Fairey, like any good propagandist, denies the obvious message of the Obama campaign posters.  He claims the art is “patriotic” and prefers to let it speak for itself as it joins his growing portfolio of romanticized communist plagiarisms of such other “patriotic” works as Demitry Moor’s famous 1920 Soviet Red Army recruitment poster Have You Volunteered?, Vladimir Kozlinsky’s 1919 poster Meeting, and the 1968 Chinese Proletarian Cultural Revolution poster Political Power Comes from the Barrel of a Gun.  Least the fascists feel slighted, Fairey also produced an exact copy of the Nazi Gestapo “death’s head” logo which he placed on t-shirts and rebranded as a part of his OBEY clothing line.

Whatever else may be said, Mr. Obama’s personality cult campaign has been an unmitigated success, creating, almost ex nihilo, a “beloved leader” out of a largely inexperienced and unknown man, void of business, executive, and foreign policy credentials.  This fact alone is cause for substantial concern, but, unfortunately for the American people, what has been true of the form of the Obama campaign is now materializing in its function as individuals cloaked in the appearance of state authority seek to silence dissent and indoctrinate the masses.

The largest portion of the media has progressed in its leftist agenda so overtly in the current presidential race that we are hardly surprised when television news “anchors” swoon at the very mention of Barak Obama while taking every opportunity to belittle Governor Sara Palin, feigning objectivity and savoring superiority all the while.  Such private sector propaganda is so common it is almost passé.  What is far more troubling is when individuals holding powerful and intimidating public posts – police officers and prosecutors, individuals who, by the very power of their offices, can strip citizens of their liberty – use their positions to intimidate anyone who dares speak against Mr. Obama.  When Missouri prosecutor Bob McCulloch takes to the air waives, placing the public on notice that he is a member of Mr. Obama’s “truth squad” and that he and other Missouri prosecutors and law enforcement officials plan to “respond immediately” to any critical speech concerning Mr. Obama that “might violate Missouri ethics laws,” the message, with all of its implications, is crystal clear – “speak out against our beloved leader and all the fury of the state will fall on you.”  Mr. McCulloch has since claimed that he was speaking only in his personal capacity – a strange assertion considering that he has no personal capacity to “respond . . .[to] violat[ions] of Missouri ethics laws.”  Perhaps Mr. McCulloch and the other members of Mr. Obama’s political police could have clarified their role by exchanging their very official looking lawyer’s suits for a selection of Fairey’s Gestapo t-shirts.

The shocking willingness of the Obama campaign to begin using state power, or at least the appearance of state power, to censor dissent even before Mr. Obama holds the actual power he seeks is doubly troubling when combined with actions of other individuals who use their taxpayer funded positions of power to indoctrinate “the masses” in favor of Mr. Obama and against anyone who opposes him.  Only weeks ago, Janna Barber had the courage to expose what is apparently all too common in public universities – professors who are paid with taxpayer funds, using their positions of considerable power and influence to force feed pro-Obama political dogma to their students.  Professor Andrew Hallam of Metropolitan State College of Denver, did for the classroom what Shepard Fairey did for political posters.  In true Nazi-Reichsführer-school-meets-Communist-Reeducation-Camp style, Hallam brought rabid party fanaticism and inexcusable psychological abuse to bear on his class, demanding that his English students write a searing anti-Palin position paper, requiring the Republican students to self-identify, and then allowing if not encouraging the enlightened, open-minded, diverse, accepting, and politically correct Democratic students to verbally berate and abuse the handful of Republicans with language that would have made Stalin blush.

Whether it is Kent Higgins, a Chaplin at the University of Massachusetts, attempting to use official University action to directly build Obama’s workforce by providing college credit for Obama campaigners, or PBS ensuring that an open ardent Obama supporter whose own success as an author is dependent on Obama’s victory, moderates the Vice Presidential debates, or Virginia public school teachers coordinating an “Obama Blue [shirt] Day” campaign to indoctrinate the young children they have so much influence over with the conviction that Barak Obama is every authority figure’s leader of choice (Obama Jugend?), or Obama’s throngs of attorneys threatening with litigation broadcasters that air unapproved messages, the actions taken together amount to a “forced coordination” – what the Nazis referred to as Gleichschaltung.

If this is the result of an Obama presidential campaign, one can only shudder to think of the impact of an Obama administration.  These are not the ways of a free people.  They are the ways of those who do by brute force what they can not do by the force of their ideas. Attempts at tyranny have historically struck a sour note in the collective soul of Americans.  There is something written on our hearts that says it is wrong to take property that does not belong to you even if you take it for a “good cause;” it is wrong to kill the innocent even if their existence is inconvenient for you; it is wrong to win a contest by intimidating the judges; and it is the honor of the strong to secure justice for the weak.  This may be the most important election in recent American history, and we owe it to ourselves and our children to choose leaders who will not tolerate tyranny much less partake in it.