S. E. Cupp
|
Posted: May 30, 2018 1:30 PM
Share   Tweet
The opinions expressed by columnists are their own and do not necessarily represent the views of Townhall.com. 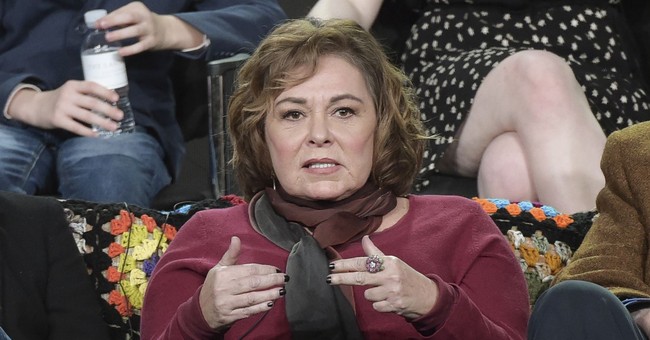 As the acclaimed poet Maya Angelou once said, "When someone shows you who they are, believe them -- the first time."

That wise adage hasn't made its way to television executives, apparently, who can't help hiring -- and rehiring -- some of the industry's worst known repeat offenders.

ABC, which rebooted the one-time hit comedy "Roseanne" this year as a paean to Trump's America, just canceled the ratings juggernaut after a wave of racist tweets by controversial comic Roseanne Barr went viral.

In the tweets, Barr suggested Chelsea Clinton was related to the liberal billionaire activist George Soros -- she isn't -- and then called Soros a "nazi." Worse, she said of former Obama administration adviser Valerie Jarrett: "Muslim brotherhood & planet of the apes had a baby=vj."

ABC falsely believed they hired Roseanne the Character -- a blue collar, everywoman who was sharp-tongued but fun-loving and, yes, a Trump supporter.

But what they got was Roseanne the Person, who is, to put it politely, a nutjob.

Upon her firing, ABC released this condemnation: "Roseanne's Twitter statement is abhorrent, repugnant and inconsistent with our values, and we have decided to cancel her show."

But what's their excuse for hiring her again? Remember, this is a woman who was an early supporter of birtherism, has compared Muslims to Nazis, took to Twitter regularly to attack citizens both private and public, floated wild conspiracy theories and bullied Trump opponents with racist, homophobic and anti-Semitic insults.

She infamously dressed up as Hitler for a photoshoot and posed with burnt "Jew cookies," and has promoted anti-Semitic personalities like the Holocaust-denier Gilad Atzmon.

As risks go, she came with a ton of it. How did ABC think this would go? Suddenly becoming a network star again would put the crazy back in the bottle? Sorry -- that's not how it works.

Need more proof? When Rosie O'Donnell returned to "The View" in 2015, she promised "a calmer version" of herself, according to Variety, after previously bouncing from the program in 2007 and leaving before her contract was through, a single season in.

But it was only a matter of time before O'Donnell's famous temper, ego and unwillingness to work well with others resulted in her second departure, just five months in.

Hiring a 9/11 truther whose Twitter timeline might as well be written in feces on the wall of a padded cell probably didn't make much sense the second time either.

Then there's everybody's favorite misogynist, Keith Olbermann, the putrid living embodiment of Bobby Riggs and Ernest Hemingway. He was just rehired by ESPN for "SportsCenter," the sixth time the network has hired him.

The very brief overview of his career highlights include:

Calling Education Secretary Betsy DeVos a "Motherf--ker," slurring Ann Coulter as a "guy (who) wants to live his life as a woman," calling conservative commentator Michelle Malkin a "big mashed-up bag of meat with lipstick on it," and yours truly as "the perfect demonstration of the necessity of the work Planned Parenthood does."

OK, so maybe he only hates a certain kind of woman.

He's been suspended and/or fired by nearly every outlet he's worked for, including ESPN, MSNBC, and CurrentTV, which said at the time, "Current was ... founded on the values of respect, openness, collegiality, and loyalty to our viewers. Unfortunately these values are no longer reflected in our relationship with Keith Olbermann and we have ended it."

The new(ish) face of ESPN, ladies and gentlemen.

Why bad people -- who are bad to other people -- keep getting hired after they have proven their selves time and again is a mystery to me.

But they'll be fine. The worst part of this is the vast numbers of talented people left in their wake.

Castmates like John Goodman and Sara Gilbert took a chance on Roseanne and "Roseanne," and are now left holding the bag. Likely dozens of crewmembers, writers and producers are also without a job suddenly. Same for every failed Olbermann venture and O'Donnell flop.

With a world teeming with fresh new talent, it seems wholly unnecessary to keep going back to the same, polluted wells that reliably end up stinking up the joint.