It's Now or Never for Bernie

S. E. Cupp
|
Posted: Jan 16, 2016 12:01 AM
Share   Tweet
The opinions expressed by columnists are their own and do not necessarily represent the views of Townhall.com. 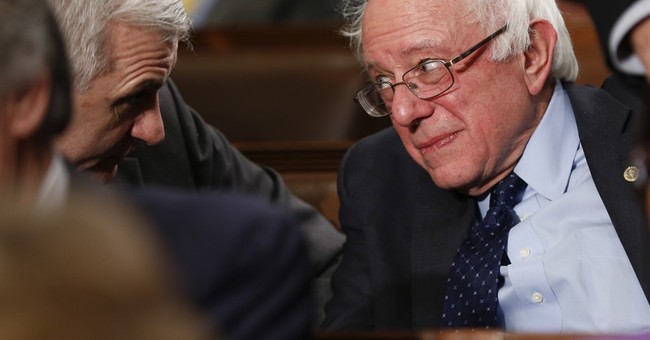 As a crucial Democratic debate nears -- crucial because the Democrats have decided to shelter Hillary Clinton by only holding six of them -- Sen. Bernie Sanders needs to make this Sunday night count.

After raising a whopping $73 million in 2015, significantly narrowing the gap in Iowa, now sitting within a mere two points of Clinton, according to a new Des Moines Register/Bloomberg poll, and surpassing her in New Hampshire, the so-called "Bernmentum" his supporters like to tout is looking less like hype and more like tangible reality. But for all the enthusiasm he's generated, if he won't take on Hillary decisively, he's got no shot of winning the nomination.

Thus far, Sanders has opted for a scalpel instead of a chain saw when it's come to criticizing Clinton, pointing out policy differences but rarely going after her most problematic weak spots -- trustworthiness, integrity, scandals, a looming potential indictment.

He said from the start he would not embark on a negative campaign, despite many wanting him to take the gloves off. Last year he lamented to CNN's Gloria Borger, "I cannot walk down the corridors of Capitol Hill without being really begged by the media to attackHillary Clinton."

But never mind attack her -- he's even gone out of his way to bail her out. At a previous debate, he gave her a memorable assist when her email scandal came up, saying to wild applause, "The American people are sick and tired of hearing about your damn emails."

But how long can the light touch last? Wanting to run a substantive campaign is a noble and lovely thought, and undoubtedly one of the reasons he's got so many fans. But this is a Clinton. She's already proven there are no lows to which she will not stoop to destroy any Bernmentum that gets between her and her old house.

In case Sanders needs a refresher on the high-minded campaign only he is having, here are just a few of the lowlights from the Clinton vs. Sanders playbook:

Last year, Texas Rep. Joaquin Castro -- who some say Clinton might tap as her veep pick -- gave a speech on her behalf in which he accused Sanders of neglecting the Hispanic community. "Sen. Sanders has not reached out to the Hispanic caucus in Congress, has not reached out to me. I've never met the gentleman. (He) has not visited Texas or the Rio Grande Valley. That's a bit of a concern."

It's also a bit of a lie -- Sanders had in fact campaigned in Texas, but the truth is inconvenient when playing the aggrieved minority card.

Another Clinton surrogate, Connecticut Gov. Dannel Malloy, gave a talk on gun violence at a Clinton campaign office, and in it said Sanders' no votes on some past gun control legislation meant he cared more about politics than shooting victims like the children at Sandy Hook Elementary School. "With respect to Bernie's position on this," he said, "it's anathema to my own. I don't understand it. I think (it's) political expediency."

Just last week Clinton's daughter, Chelsea, told supporters at a campaign stop that Sanders wants to "dismantle Obamacare andMedicare." Of course, the important part she left out is that he wants universal health care for all, so not only was it nasty fear mongering, it was also dishonest. Even many Democrats were offended. "I really regret that the Clinton campaign sent Chelsea out to make the attack that she made," former Obama adviser David Axelrod said on CNN. "I don't think it was the right attack. It's not really an honest attack, and it's not something they should have sent her out to do."

And Hillary herself has taken cheap swings at Sanders. After he said at a debate that "all the shouting in the world" isn't going stop gun violence, she crafted a campaign trail-ready new line that managed to imply Sanders was sexist. "I'm not shouting," she said. "It's just that when women talk, some people think we're shouting."

If you listen to Hillary and her hit men, Bernie Sanders is a racist, sexist, bloodthirsty gun nut and a guy who hates Medicare. And yet he's still taking the high road.

With Iowa and New Hampshire around the corner, it's now or never for Sanders. If he wants to turn Bernmentum into the nomination, he's got to retire the kindly grandpa routine and channel his inner assassin.